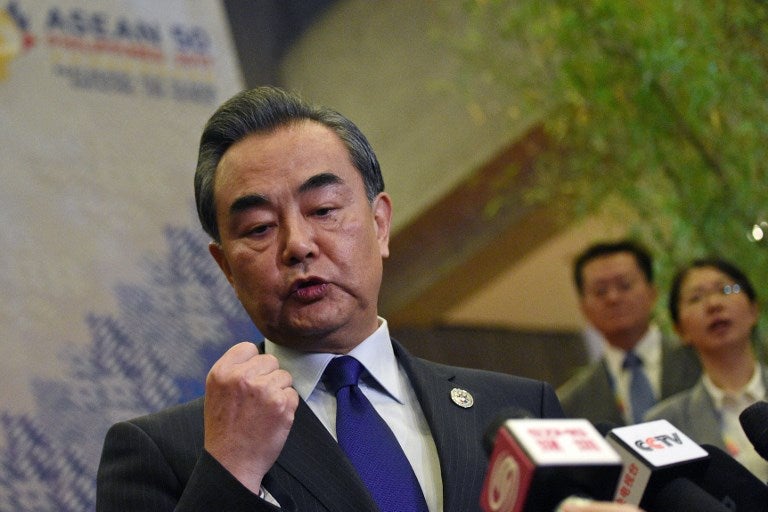 Countries from outside the region, particularly the United States, have frequently mobilized massive strategic weapons in the region, especially in the South China Sea, to flex their muscles, Wang told reporters in Singapore on Saturday.

This “constitutes a security threat and pressure on the region’s countries, including China, and has become the biggest driving force behind militarization in the region”, Wang said on the sidelines of the Association of Southeast Asian Nations Foreign Ministers’ Meeting.

Earlier on Saturday, the final day of a series of meetings, US Secretary of State Mike Pompeo said at a news conference in Singapore that he has recently “raised concerns about Chinese militarization of the South China Sea”.

However, the Asean-China foreign ministers’ meeting “welcomed the conduct of the Asean-China Maritime Exercise in 2018 to enhance confidence and trust among the Asean and Chinese navies”, said a statement by the Singapore side, host of the event, on Saturday.

“Ignoring China and Asean’s efforts, and progress made in regional peace and South China Sea stability, is at the very least disrespectful, and irresponsible, to countries in the region,” Wang said.

Given the increasing military threats and pressure, China should exercise its rights to self-defense conferred by international law, Wang said.

Labeling self-defense as “militarization” is a distortion of the truth, Wang added.

In response to Pompeo’s comment that the US “seek(s) partnership, not dominance” in the region, Wang said it is a rare position made by the US given the country’s record so far, and the US is expected to honor its words through actions.

Speaking on the progress achieved at the annual meetings this year, Wang noted that the foreign ministers of the 10 Southeast Asian countries plus China, Japan and the Republic of Korea, agreed on speeding up negotiations of the Regional Comprehensive Economic Partnership trade deal.