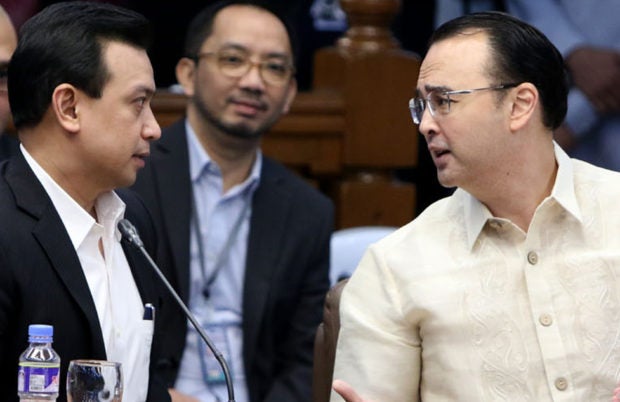 Opposition Sen. Antonio Trillanes IV on Sunday called Foreign Secretary Alan Peter Cayetano a “political snake” for shedding his loyalty to the Aquino administration at the height of the South China Sea row in 2012 and 2013 and donning the Duterte administration’s jacket in appeasing China today.

Cayetano, a former senator, blames the souring of relations between the Philippines and China on the Aquino administration’s handling of the territorial dispute between the two countries in the South China Sea.

When he was in the Senate, however, he never questioned the Aquino administration’s decision to submit the dispute for international arbitration after China grabbed Panatag Shoal, a rich fishing ground 230 kilometers off the coast of Zambales province, from the Philippines after a two-month maritime standoff in 2012.

But in an open letter to Aquino on Friday, he questioned the previous administration’s handling of the dispute and Trillanes’ “secret trips” to Beijing at the height of the face-off at Panatag Shoal.

“Secretary Cayetano has proven to be a political snake. The Panatag standoff happened in 2012, during which time Cayetano was still a loyal ally of the Aquino administration, so obviously he never saw anything wrong with how P-Noy (former President Benigno Aquino III) resolved it then,” Trillanes said in a statement on Sunday.

He said his mission had never been a secret to Cayetano.

“In fact, I clearly remember telling him, as well as the other senators then, of the gist of my mission as back-channel negotiator. For that matter, I had multiple media interviews about it but, again, Cayetano never saw anything wrong with it then,” Trillanes said.

“But for the benefit of those pretending to be blind and deaf, like Cayetano, for the nth time I will repeat the facts behind my role as back-channel negotiator,” he said.

Trillanes said Aquino designated him as back-channel negotiator at the height of the standoff in May 2012, with 80 to 100 Chinese vessels facing off with a handful of Philippine Navy and Coast Guard ships at Panatag Shoal.

“My mission, generally, was to deescalate the tension in the shoal. Specifically, it entailed the reduction of the number of Chinese ships in the area. The issue of sovereignty was not covered and was never discussed,” he said.

Trillanes said the negotiations lasted for about three months, “at the end of which we were able to reduce the number of Chinese ships in the area to just three, all of which were positioned outside the shoal.”

“In short,” Trillanes said, “I was able to accomplish my mission.”

China’s refusal to withdraw the last three ships forced the Aquino administration to go to the Permanent Court of Arbitration in The Hague to challenge Beijing’s claim to nearly all of the South China Sea.

The Philippines won the case in 2016, but China ignored it.

“Now,” Trillanes said, “the question to Cayetano and his boss, [President] Duterte, is this: Why didn’t you follow through on our historic victory at the arbitration court? Or better yet: Why aren’t you fighting for our sovereignty the way you promised during the campaign?”