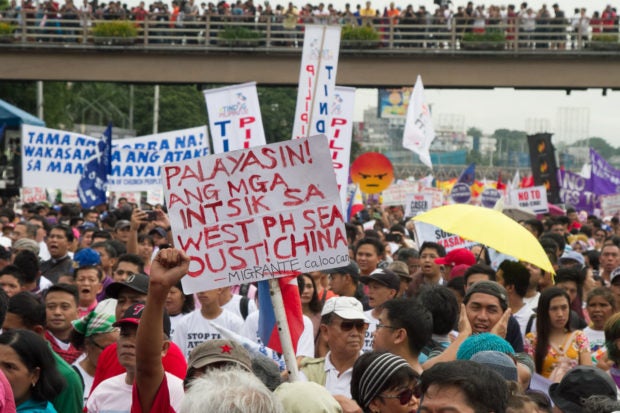 Acting Chief Justice Antonio Carpio has warned that Filipinos who disapprove of the government’s “appeasement and defeatist policy” toward China will convert their displeasure into votes against Duterte administration candidates in next year’s midterm elections.

Results of recent opinion polls released recently showed that most Filipinos oppose the administration’s tack in the territorial dispute with China in the South China Sea.

A Pulse Asia poll found that 73 percent of Filipinos want enforcement of the July 2016 ruling of the UN-backed Permanent Court of Arbitration in The Hague in favor of the Philippines in the country’s challenge to China’s claim to nearly all of the South China Sea.

Results of recent Social Weather Stations polls showed that 81 percent of Filipinos disapprove of the government’s refusal to enforce the arbitral ruling, and that 87 percent want the government to retake Philippine-claimed islands in the Spratlys that China has seized and converted into military bases.

“If the Duterte administration still refuses to heed the sentiment of the Filipino people and continues with its appeasement and defeatist policy, the Filipino people will convert their sentiment into votes in the … 2019 elections. That is how our democracy works under the Constitution,” Carpio said in his remarks at the launch on Tuesday of the book “Rock Solid: How the Philippines Won Its Maritime Case Against China” by journalist Marites Dañguilan Vitug.

Former Foreign Secretary Albert del Rosario, speaking at the same event, called on President Duterte to defend the Philippines’ rights in the West Philippine Sea, waters within the country’s 370-kilometer exclusive economic zone in the South China Sea, “according to what we are fully entitled to under international law.”

“We need to listen not to the Chinese ambassador but to our people. We need to embrace not China but our own country,” said Del Rosario, who led the Philippine challenge to China’s sweeping claims in the South China Sea.

The Duterte administration “should cast aside their fear of displeasing China,” he said.

President Duterte has faced criticism for setting aside the arbitral ruling, preferring aid, loans and investments from China.

“The Philippines took a measured risk in order to protect what rightfully belongs to it. To subsequently afford China a soft diplomacy is a clear mockery not only of our people but of the whole of the rules-based international system,” Del Rosario said.

Carpio, a member of the legal team that successfully argued the Philippine case before The Hague tribunal, called for efforts to increase public awareness of the Philippine victory over China in the arbitration.

“We have to grow the number of Filipinos demanding enforcement of the ruling to over 90 percent so that the Duterte administration can no longer ignore the sentiment of the Filipino people,” Carpio said.

It’s “very doable,” he said, given the polls’ findings.

“It is just a matter of explaining to the people that the first step in retaking our islands is to enforce the ruling,” he added.

Carpio pushed for arbitration after China seized Panatag Shoal—a rich fishing ground off the coast of Zambales internationally known as Scarborough Shoal—after a two-month maritime standoff with the Philippines in 2012.

The Philippines won the case, but China ignored the ruling—and the Duterte administration, pleading military weakness, shelved the country’s victory to mend relations with Beijing and land the Philippines on the Chinese global economic master plan.

“I never thought for a moment that we have to first convince our own … government that it is to the immense benefit of the Philippines and the Filipino people to use the ruling to protect and preserve Philippine sovereign rights in the West Philippine Sea,” Carpio said.

“Worst of all, I never expected that our own President would announce publicly that he was ‘setting aside’ the ruling,” he added.

Carpio insisted that Sandy Cay, a sandbar near the Philippine-occupied Pagasa Island (Thitu) in the Spratlys, was seized in 2017 by China the same way it grabbed Panatag Shoal in 2012.

The Duterte administration claims Sandy Cay remains unoccupied by either Chinese or Filipinos.

“The Duterte administration’s response to the Chinese seizure of Sandy Cay was neither to protest nor to file an arbitration case but to simply hush it up for fear of offending China,” Carpio said.