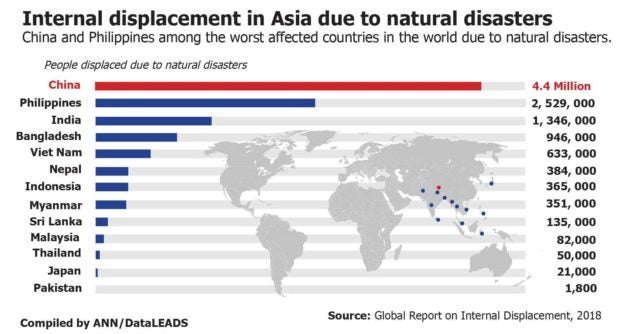 NEW DELHI — China and the Philippines are among the worst affected countries in the world due to the natural disasters. As in previous years, Asian countries were worst-affected by displacement associated with disasters.

In the last year 18.8 million new internal displacements associated with disasters were recorded in 135 countries and territories, according to the recent Global Report on Internal Displacement.  Weather-related hazards triggered the vast majority of displacement, with floods accounting for 8.6 million and storms 7.5 million in 2017.

The East Asian region is most prone to natural disasters and accounted for 46 per cent of the total displacement.

China recorded the highest number of internal displacement with 4. 4 million displaced internally in 2017. Floods in Hunan in Southern China between June and July led to the region’s largest displacement, more than 1,620,000 people. Further flooding displaced 547,000 in other southern provinces.

Philippines is located along the pacific “typhoon belt” and “ring of fire” and is exposed to recurring typhoons, storms and landslides that displaced around 2.5 million people in the last one year.

India had the third highest number of people displaced in the region with 1. 2 million internal displacements. The recent floods in eastern state of Bihar displaced around 855,000 people that had to be put in camps.  The floods destroyed agriculture land which resulted in the migration of people from rural to urban areas. Monsoons and resultants floods displaced around 946,000 people in Bangladesh.

Viet Nam is one of the most disaster-prone countries in the world.  According to the report more than 70 percent of the population live in coastal areas and low-lying deltas exposed to typhoons, tropical storms and floods. The last year saw around 633,000 people displaced.

In Nepal 384,000 people were displaced due to the recurrent flash floods and landslides that destroyed nearly 89,000 homes and displaced people across 35 districts including such areas where flooding is relatively unusual.

The recurrent volcanic eruptions, landslides, floods and earthquakes in Indonesia have displaced around 365,000 people. Natural disasters displaced 351,000 in Myanmar and 135,000 in Sri Lanka.

The Global Report on Internal Displacement report suggests that the high numbers of displaced people reflect the need of work to be done in sustainable development and addressing impacts of climate change.