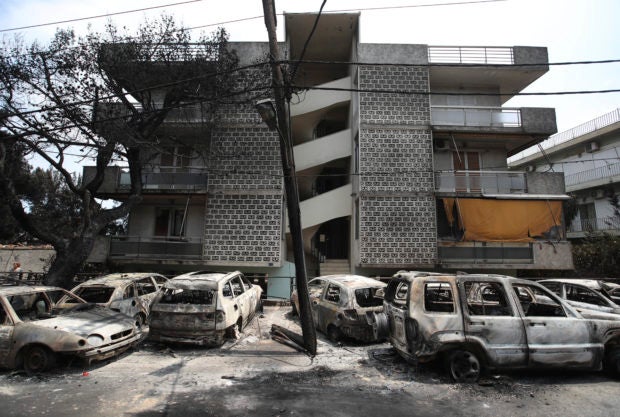 Burned-out cars stand outside an apartment block in Mati east of Athens, Tuesday, July 24, 2018. Twin wildfires raging through popular seaside areas near the Greek capital have torched homes, cars and forests and killed at least 49 people, authorities said Tuesday, raising the death toll after rescue crews reported finding the bodies of more than 20 people huddled together near a beach. (AP Photo/Thanassis Stavrakis)

The Department of Foreign Affairs (DFA) extended its condolences to Greece after wildfires in a popular seaside resort outside Athens killed more than 70 people on Monday.

“On behalf of the Filipino people and the Philippine Government, I would like to convey my deepest sympathies to the Greek people, especially to the grieving families of the victims and casualties of the catastrophic wildfire in Eastern Attica on 23 July 2018,” Foreign Affairs Secretary Alan Peter Cayetano said in a statement on Wednesday.

“I believe the that the resilience of the Greek people will see the nation through this very difficult time. We pray for more strength to the bereaved families and the fast healing of those injured,” Cayetano added.

The DFA said the Philippine Embassy in Greece has been monitoring the fires in three areas—Mayo, Rafina, and Kineta—and has checked on the situation of Filipinos near the affected areas.

Embassy Chargé d’Affaires Rosario Lemque reported that there were no Filipinos among the casualties in the deadly blaze.

Lemque added that Greek authorities claimed it is too early to ascertain the number and nationality of the victims but reported that most of them are Greeks.

Reports said the wildfire, considered the worst since 2007, was caused by a massive heat wave that swept the country.

Italy, Germany, Poland and France have all sent help in the form of aircraft, vehicles and firefighters, while Spain and Cyprus have also offered their assistance.  /muf

Of birthdays and armageddons: That Panelo paean to the President