Esperon likens Reds to IS terrorists 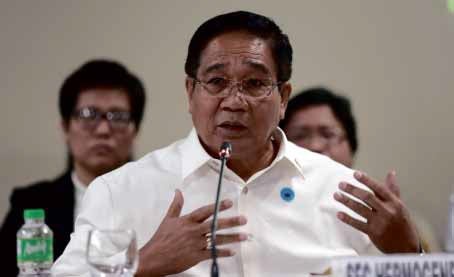 Esperon led the Philippine delegation to the first United Nations conference of heads of counterterrorism agencies of member-states at UN headquarters on Friday.

In a statement issued on Saturday, Esperon said he assured the international gathering that the Philippines had been taking steps to fight terrorism, including “strengthening engagements with local and international bodies relative to antimoney laundering and terrorism financing, implementing the conventions related to chemical and biological weapons, and strengthening its partnership with the Interpol.”

While discussing efforts to strengthen the Philippine antiterrorism law and enforce an action plan to prevent and counter violent extremism, Esperon cited the CPP-NPA as a local terrorist organization as dangerous as the Islamic State (IS)-inspired Maute group that laid siege to Marawi City last year.

“The CPP-NPA has been committing the same brutal atrocities like the Daesh,” Esperon said, using an Arabic reference to IS.

“CPP-NPA terrorists killed more than 10,000 soldiers, policemen and civilians in one of the longest-running insurgencies in the history of the world. It had entrenched itself in international organizations through its international solidarity networks,” he said.

Esperon said that “by locally proscribing the CPP-NPA as a terrorist organization, the true nature of the group will be exposed to the community of nations as an equally brutal and dangerous presence as the Daesh in a peaceful democratic state.”

The Department of Justice has a pending petition in a Manila court seeking to declare the CPP-NPA a terrorist group.

He said it was also the President who aborted the June 28 resumption of formal talks in Oslo, Norway.