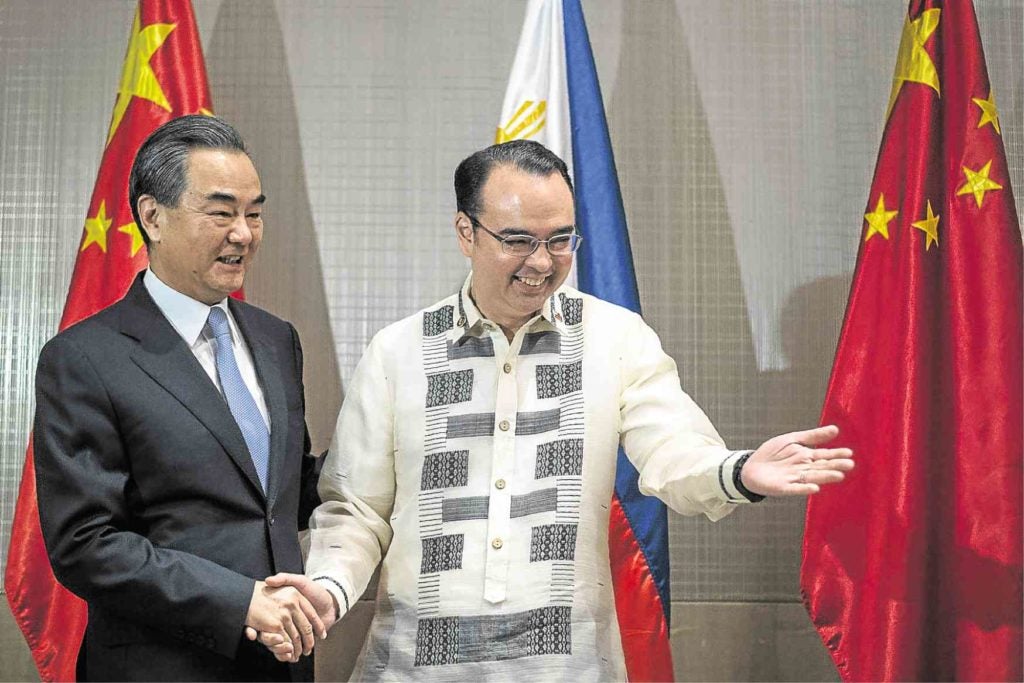 “I believe at this point in time, may co-control tayo because malaya na tayong pumupunta,” Cayetano said in an interview after the celebration of the 12oth anniversary of the Department of Foreign Affairs in Pasay City.

Scarborough, located west of Zambales well within the 200-nautical mile exclusive economic zone of the Philippines, is a traditional Filipino fishing ground but China seized it after a two-month standoff with the Navy in 2012.

At that time, Filipino fishermen lost access to the resource-rich shoal.

Cayetano said Filipinos should not expect China to immediately change its position in claiming the Scarborough Shoal.

“China does not expect us to change our position. So why would we expect them to already change their position right away. Mahabang negosasyon ‘yan,” he said.

He said the situation under the  Duterte administration was “much better” compared to the Aquino government.

“Definitely, when President Duterte came in, it was controlled by the Chinese,” he said.

“We can use semantics and pwede tayong magdebate how much we control and how much they control. Ang masasabi ko lang, our situation now is much better than two years ago. Could it be much better than today? Definitely,” he added.

The country’s top diplomat said the Philippines want total control of the shoal but said it would require long negotiations.

“Do we want total control? Definitely. But the reality is matinding negotiations ang dadaanan natin,” he said.

During a dialogue with the military in Zambales, Filipino fishermen wanted the government to enter into an agreement with China giving them full access to the lagoon at Scarborough.

Rolly Bernal, president of Scarborough Fisherfolk Association, said that the situation had improved under the Duterte administration but they were seeking equal rights with Chinese fishermen over the fishing ground.

In an interview in Malacañang, fisherman Rommel Sejuela said China apparently still controlled Scarborough saying the Chinese Coast Guard remained in the disputed shoal with some Chinese allegedly taking some of their catch.

Cayetano said China confirmed that Filipino fishermen could take shelter in the lagoon during bad weather.

But he insisted that no one was allowed to fish inside the lagoon.

“The Chinese, Vietnamese and Filipinos are all not allowed to fish inside the lagoon because spawning ground ito and we have to protect the environment,” he said.

“We are now talking not only to China but to the whole Asean na maisama sa COC ung protection ng marine at nung environment,” he added.

The Permanent Court of Arbitration ruled in 2012 that the Panatag Shoal is a common fishing ground for Filipinos, Chinese, and other fishermen even if it’s located within the Philippines’ exclusive economic zone.

Cayetano said the government erred when it said in its protest against China at the United Nations arbitral tribunal that Scarborough was a traditional fishing ground for Filipinos.

“So, ang finding ng arbitral court, it is traditional fishing ground of the Vietnamese, Chinese, and the Filipinos. Eto yung sinasabi natin na may gains and losses din,” he added. /cbb

Read Next
Roque disputes Trillanes charge of turnaround
EDITORS' PICK
Cherry Mobile teams up with Cloud Panda PH, launches online store
Philippines’ COVID-19 cases accelerate to 18,638
‘Puno na lahat:’ Metro workers brave lack of public transport, rains on Day 1 of GCQ
Leveling up your ‘lutong bahay’ with the kitchen companion you never knew you needed
Duterte certifies as urgent anti-terror bill
Someone from the Philippines can become $356 Million richer this Tuesday
MOST READ
‘If I had not been SolGen, I will make you eat your words,’ Calida tells Coco Martin
5 car dealership outlets shutting down
Duterte certifies as urgent anti-terror bill
51 percent of German firms holding back investments in PH, but not because of COVID-19
Don't miss out on the latest news and information.