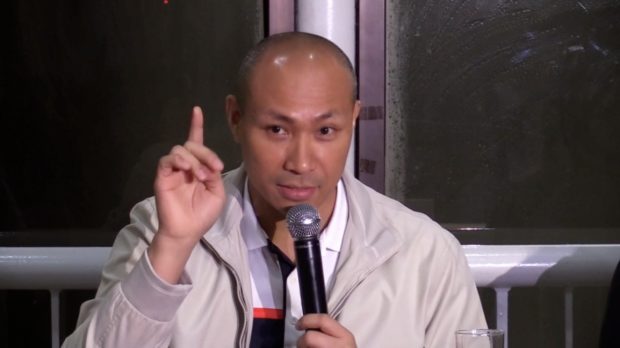 Magdalo Rep. Gary Alejano on Saturday lashed back at high government officials, saying it was President Rodrigo Duterte himself and not he who was endangering the security of the country.

“It is Duterte and his cohorts who endanger our national security by allowing the blatant encroachment of China on Philippine territory. By kowtowing to China, they neglected and forgot the welfare of the country. They are prioritizing the selfish interest of a few,” Alejano said in a statement.

The lawmaker was reacting to a statement made by Foreign Secretary Alan Peter Cayetano, who said last week that Alejano and Sen. Antonio Trillanes IV were endangering the country’s security by saying the President had ordered the military to stop patrolling the West Philippine Sea.

West Philippine Sea is part of the South China Sea within the Philippines’ 370-kilometer exclusive economic zone in the hotly contested waterway.

“I only spoke what was relayed to me by a source of authority when I said that Malacañang ordered our armed forces to desist from patrolling the West Philippine Sea,” said Alejano, a former Marine officer.

“The information was relayed to me toward the end of last year, but I believe it is continuing as can be clearly gathered from the testimony of the Filipino fishermen in Malacañang this week,” he added.

Three fishermen were brought in by presidential spokesperson Harry Roque and they confirmed news reports that Chinese coast guards were taking the best of Filipino fishermen’s catch at Panatag Shoal and giving the fishermen noodles, wines and cigarettes for these in a barter trade that could be called forced because of the language barrier.

The fishermen also confirmed that China controlled the shoal, despite a 2016 ruling by the Permanent Court of Arbitration in The Hague that Panatag is a common fishing ground for the Philippines, China and Vietnam.

“I’m a former soldier, I will not endanger my colleagues in the Armed Forces. As a military man, I was trained to serve and fight for the country. I have put my life in danger several times to defend our nation. I cannot accept someone who has dubious patriotism himself to question my intentions,” he said.

The lawmaker said the abuses experienced by the fishermen at Panatag Shoal was due to the lack of Philippine presence there.

“Do you think China does not know the number and frequency of patrols in the West Philippine Sea? Of course, they do, given their advance surveillance and monitoring capabilities,” Alejano said.

“This is also the reason why they are emboldened to bully our fishermen knowing that we have weak presence in the area. You in the Duterte administration are the ones who are blind to China’s abuses,” he added.

The lawmaker warned that “time will come that those government officials fiercely defending China’s interests will be exposed on their concessions with China.”  —JEROME ANING