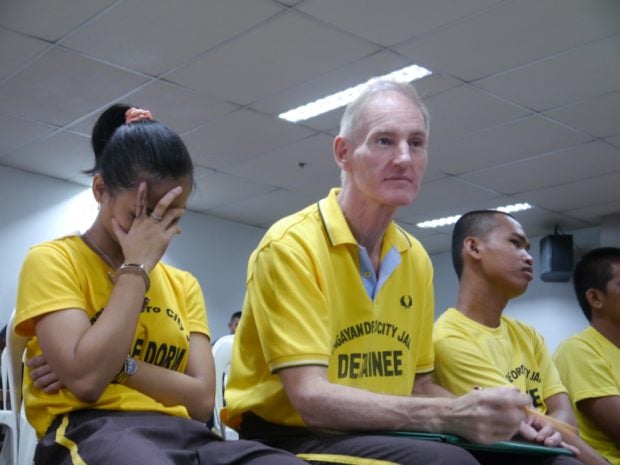 Carme Ann Alvarez (left) and Peter Gerard Scully (center) during the first hearing of the charges filed against them at the sala of Judge Jose Escobido in 2016. Photo by Grace Cantal Albasin

CAGAYAN DE ORO CITY – A local court has convicted an Australian national and his accomplice on Wednesday for sexual abuse of minors and for filming his acts and selling them to his clients abroad.

Found guilty of one count of human trafficking and five counts of rape by sexual assault was Peter Gerard Scully.

Scully also got an additional six years to nine years and 11 months for the rape offense.

The 55-year-old foreigner faces more than 50 cases in the cities of Malaybalay, Surigao, and Cagayan de Oro.

Based on investigation by local and foreign law enforcement agencies and from statements of witnesses, Scully was known to have made thousands of dollars from selling videos of the sexual abuses he committed on children, and also by posted them on pornography websites from 2011 to 2014.

Payments for viewing of the abuses online were reportedly made through money transfer.

Scully was arrested in Malaybalay City in Bukidnon on February 20, 2015 by combined elements of the police and the National Bureau of Investigation (NBI).

He was a fugitive in Australia for fraud and has cases all over Europe for broadcasting his sexual acts over the internet involving children. /je