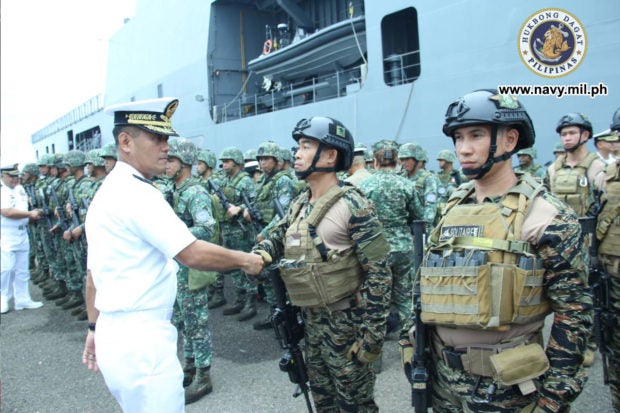 The Philippine Navy on Wednesday held a send-off ceremony for its contingent that will participate in the world’s largest maritime exercises, the Rim of the Pacific (Rimpac) in Hawaii.

This marks as a new milestone for the Navy as it is the first time that the Philippines will send ships to the exercises, having only sent observers in previous years.

“This will be an opportunity for the navy to build and enhance relationship with other navies participating in the exercise through cultural exchanges, sports and similar activities and also engaging the sizeable Filipino community in Hawaii,” said Navy spokesperson Capt. Lued Lincuna.

The BRP Davao del Sur (LD-602) and the BRP Andres Bonifacio (FF-17) with one AW109 helicopter, a Naval Special Operations Group team, and one Marine company will form the Naval Task Force Rimpac.

The NTF Rimpac is headed by Captain Ernesto Baldovino and the head of mission is Commodore Toribio Adaci Jt.

A Royal Malaysia Navy Ship (KD Lekiu F30) will join the NTF Rimpac as it sails from Cebu. It will later link up with other navies from Indonesia, Japan, and Australia as they head to Hawaii.

The Rimpac hosted by the United States is the world’s largest maritime exercises held every two years. Twenty-six countries, 47 ships, five submarines, 18 national land forces, and more than 200 aircraft and 25,000 personnel will participate.

“This is the gathering and showcasing of the best naval assets and personnel around the globe with the end view of promoting regional stability in the Pacific Region and sustaining cooperative relationship among the participants,” he added.

The exercises were recently in the spotlight after the US disinvited China from the drills.

At the Shangri-La Dialogue in Singapore over the weekend, US Department of Defense Secretary James Mattis said the rescinding of the invitation was their “initial response” to China’s increasing militarization of the South China Sea.

“China’s behavior is inconsistent with the principles and the purposes of the Rimpac exercise, the world’s largest naval exercises, in which transparency and cooperation are hallmarks,” he said. /je

Read Next
BI to deport British involved in swindling, money laundering
EDITORS' PICK
Taal Volcano flexes signs of restiveness anew
SM continues to send relief assistance to remote towns in Batangas
Get exciting deals and discounts when you download the new McDonald’s App
China expands lockdowns to 25M people to halt viral outbreak
DOH: Second person ‘under investigation’ for 2019-nCoV in Tacloban City
‘A greener, cleaner tomorrow’: A how-to guide for Filipinos who want to help with today’s energy crisis
MOST READ
PH to ‘start process’ of VFA termination — Locsin
172 Chinese tourists arrive in Bohol
Lacson on Duterte’s threat to end VFA over Bato’s canceled visa: Where is the connection?
DOH: Second person ‘under investigation’ for 2019-nCoV in Tacloban City
Don't miss out on the latest news and information.