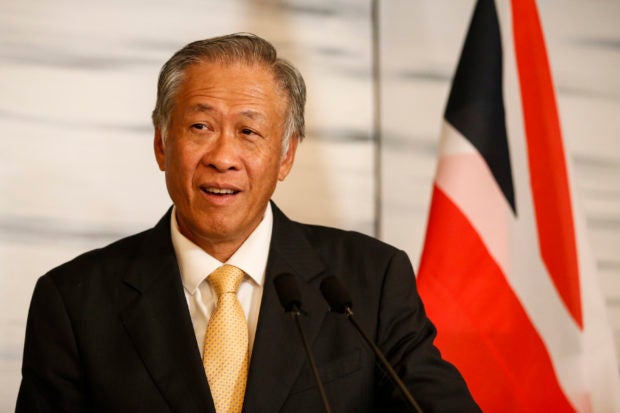 All countries from the Association of Southeast Asian Nations (Asean) will take part in the first-ever maritime exercises with China later this year.

Singapore Defense Minister Ng Eng Hen said on Sunday at the Shangri-La Dialogue that the 10-member states have agreed to send either ships or troops for the exercises.

“Singapore as the ASEAN chair will be co-directors with China for the exercise, and we will host the Table Top Exercise in August 2018,” he said in his speech.

Ng did not give details where and when the field training exercises would take place, however.

The small city-state is leading the Asean chairmanship this year. Ng said the exercises are part of the confidence-building measures between Asean and China.

But the drills will be held against the backdrop of increasing tensions over China’s militarization of the South China Sea. All other claimants of the disputed waters aside from China are from Asean, including the Philippines.

China, as well as the Philippines, Vietnam, Malaysia, Brunei, and Taiwan have competing claims in the bitterly contested waterway – one of busiest shipping lanes in the world.

The Asian superpower had also become bolder with its actions by deploying anti-ship cruise missiles and surface-to-air missiles in recent weeks in some disputed areas close to the Philippines.

“The drills are intended to be part of confidence-building measures. But at the tone the nations are speaking now, I don’t think it’s a good idea [to hold the exercises],” a ranking Philippine military official told the Inquirer on condition of anonymity.

Earlier reports said the drills would likely include maritime search and rescue and disaster relief.

Defense analyst Jose Antonio Custodio said holding the exercises amid China’s continuing activities in the South China Sea despite its earlier pledge that it will not militarize the disputed seas is “tantamount to rewarding Beijing for bad behavior.”

He added that confidence-building measures have been “abused” by China since the 1990s when it lied about its presence in Panganiban Reef (Mischief Reef) by saying that they only built fishermen shelters.

“The Chinese military will also use these exercises to establish direct contacts with their military not for confidence-building measures but more on networking to coopt and influence Asean militaries, with the Philippine military fast turning into the most vulnerable one for cooptation due to the pro Beijing policy of Duterte and the willingness of some within the Philippine military institution to advance their careers by advancing pro-China policies within the services,” he said.

“For ASEAN, it’s about highlighting the bloc’s ability to manage the disputes with China, and more broadly to emphasize that it continues to be relevant and maintains centrality in the regional security architecture,” he said.

But for China, he said, the drills demonstrate that “it’s willing to cooperate with Asean, and more broadly feeds into its strategic narrative that the South China Sea disputes require no external interference – Asean and Beijing can well manage the issues properly on their own.”

“Despite what’s happening in the South China Sea, especially with Beijing’s continued militarization of the area, both parties still find imperatives to push on with the exercise, which should be seen as a largely politically symbolic initiative than anything else,” he added.

But Koh believes that the joint military drills would only be confidence-building measures at best, but it will not help solve the territorial disputes.

“Even where it concerns confidence-building, I also have reservations about the impact it has on actually moderating behavior of the claimants, not least China. If I can just be blunt: even if this exercise takes place and becomes a regular event, the claimants will still most plausibly continue with their respective activities to maintain and even enhance their possessions in the disputed waters, including militarization,” he said.

Asean and China have also been negotiating a code of conduct in the South China Sea.

“On a less dramatic but no less important in its impact, the world is also watching how Asean and China work together to conclude the code of conduct on the South China Sea, because both the process and outcome of the COC will shape Globalization 2.0,” Ng said.

“A substantive and effective COC which addresses key concerns of claimant states as well as that of user states will do much to boost confidence and promote stability,” he added.   /kga

Read Next
Duterte assures South Korean businessmen of safety in PH
EDITORS' PICK
How to lose a PH genius: Wesley So officially a US citizen
Every Filipino home can now be a smart home with realme TechLife
Nestlé Philippines’ ‘NESCAFÉ Plan’ bags Grand Anvil at PRSP 56th Anvil Awards
Smart reinforces superiority with best speed and mobile video experience in PH
New 3,045 COVID-19 cases push PH total active cases to 40,074
LTO’s P500-M deal for screws draws scrutiny
MOST READ
Robredo on Sara Duterte leading poll surveys: Why are Filipinos drawn to leadership of this kind?
How to lose a Filipino genius: Wesley So officially a US citizen
US lays out list of aid to ‘satisfy’ Duterte following VFA payment demand
Lawyer for red-tagged tribal folk stabbed; laptop, documents taken
Don't miss out on the latest news and information.