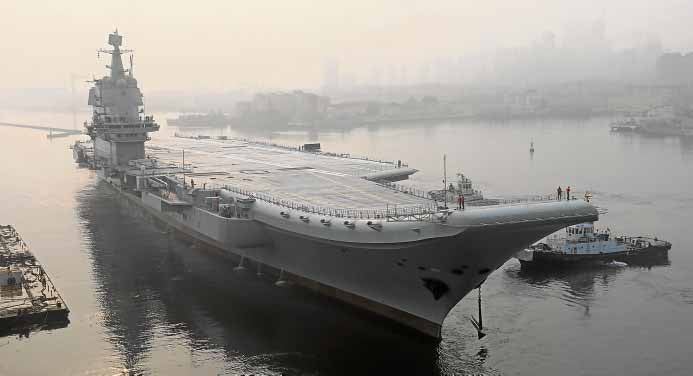 SEA POWER China is seeking military supremacy not only in the South China Sea region but also
beyond with its first home-built aircraft carrier—known only as Type 001A—completing sea trials
in a landmarkmoment for its growing naval fleet. —AP

The Philippines should condemn China’s militarization of the South China Sea and strengthen its alliance with the United States for protection, a risk analyst said on Sunday.

Lawmakers and security experts have also been urging President Rodrigo Duterte to protest China’s military actions in the disputed waterway.

The President, however, insisted that asserting Philippine sovereignty in the West Philippine Sea — waters within the country’s 370-kilometer exclusive economic zone in the South China Sea — meant trouble that the Filipinos could not handle.

Anders Corr, founder of the international affairs analyst  Journal of Political Risk, said China’s deployment of long-range bombers on artificial islands in the South China Sea was part of a “continuing process of incremental takeover,” and a closer alliance with the United States would be beneficial to the Philippines.

“The basic response should be a presidential statement against the bomber landings and should be a closer alliance with the US, which is the only country that can protect the Philippines right now from China,” Corr said in a television interview.

The People’s Liberation Army (PLA) Air Force announced on Friday that it recently organized multiple bombers such as the H-6K to conduct takeoff and landing training on islands and reefs in the South China Sea in order to improve its ability to “reach all territory, conduct strikes at any time and strike in all directions.”

The announcement, published on the PLA Air Force’s Weibo microblogging account, did not provide the precise time and location of the exercise, but the Washington-based think tank Asia Maritime Transparency Initiative (Amti) identified the location as Woody Island, the largest island in the Paracel archipelago that China, Vietnam and Taiwan are disputing.

With a combat radius of nearly 3,520 kilometers, Amti said the H-6K bomber would put all of Southeast Asia in its range from Woody Island.

“Nearly all of the Philippines falls within the radius of the bombers, including Manila and all five Philippines military bases earmarked for development under the US-Philippines Enhanced Defense Cooperation Agreement (Edca),” Amti said on Saturday.

Corr said that while it was unlikely for China, which he called “bully,” to attack the Philippines at present, there was a potential threat to the country.

“You potentially have a situation where for some reason Duterte or the people of the Philippines went against what China preferred in terms of their foreign policy, you could have a potential attack on the Philippines,” Corr said.

“The threat is out there and it’s not just to the Philippines,” he added.

China claims nearly all of the 3.5-million-square-kilometer South China Sea in rivalry with the Philippines, Brunei, Malaysia, Vietnam and Taiwan.

Of the other claimants, only the Philippines has challenged China’s claim in the Permanent Court of Arbitration in The Hague and won, but the President has set aside the ruling in exchange for aid, loans and investments from Beijing.

The PLA has been landing military aircraft on the reefs since last year and recently deployed antiship cruise missiles and surface-to-air missile systems on the biggest of the seven reefs—Kagitingan, Zamora and Panganiban.

Despite prodding by lawmakers and security experts to protest China’s militarization of the South China Sea, Malacañang has announced no move to assert Philippine sovereignty in the country’s own waters in the hotly contested region.

In a speech in Cebu on Saturday, the President stressed that he would not go to war over the West Philippine Sea because the Philippines did not have the military capability to take on China.

He reiterated his openness to undertake joint exploration and development in the West Philippine Sea, a vast area believed to be rich in oil and natural gas.

The President said that while the arbitral ruling was announced in July 2016, two weeks after he assumed office, the Philippines actually won the arbitration against China months earlier.

“It did not come during my term,” the President said. “But then again, if I were the President at that time, what could I have done? I can send my Marines there. I can send every policeman there. But what will happen? They will all be massacred.”

“A review of our bilateral relationship with China is in order. We can’t call a country that robs us of our islands and threatens us with nuclear war a friend,” Hontiveros said in a statement.

“By placing our country within striking distance of its nuclear-capable bombers, China has virtually threatened us with nuclear war over the West Philippine Sea. This is unacceptable,” she said.

“With the silence and subservience of the Philippine government to China, we are placing in grave danger not only our country but also our neighboring nations,” Alejano said in a separate statement.

Senate Minority Leader Franklin Drilon urged the Senate to take a strong stand and assert the Philippines’ sovereignty in the West Philippine Sea.

“We must assert the Senate’s role in foreign relations to condemn this creeping invasion of our territory,” Drilon said in a radio interview. —Reports from Julie M. Aurelio, Connie Fernandez-Brojan, DJ Yap, ABS-CBN and the wires