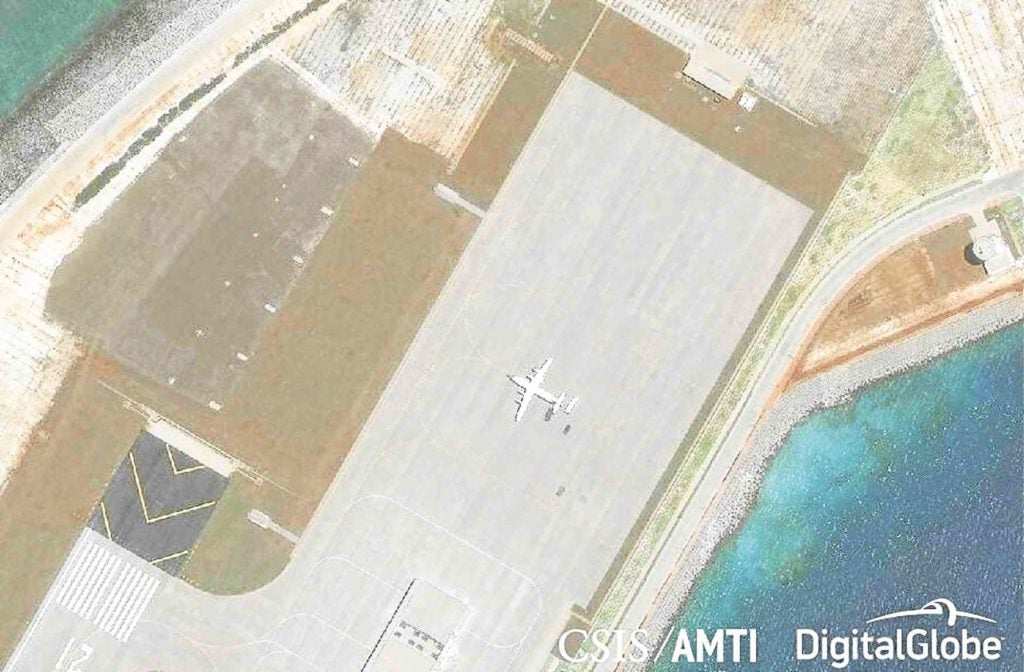 PH SHOULD BE CONCERNED The Asia Maritime Transparency Initiative says the landing of a Shaanxi Y-8 military plane on Zamora Reef should be especially galling to the Philippines, which has 100 civilians and a small military garrison on Pag-asa Island just 22 kilometers away. PHOTO FROM AMTI.CSIS.ORG

Malacañang need no more wait to acquire technology to verify and protest China’s violation of the Philippines’ sovereignty in the Spratly archipelago.

Satellite imagery has shown the first confirmed landing by China of a military aircraft on Zamora Reef in the Spratlys, the Asia Maritime Transparency Initiative (Amti) at the think tank Center for Strategic and International Studies (CSIS) in Washington said on Thursday.

Amti published the pictures, taken on April 28, on its website showing a Shaanxi Y-8 military plane on Zamora Reef (internationally known as Subi Reef), one of seven Philippine-claimed features in the Spratlys that China has seized and transformed into artificial islands from which to project its military might in the South China Sea.

The other six Philippine reefs that China has taken over and developed into military outposts in the Spratlys are Kagitingan (Fiery Cross), Calderon (Cuarteron), Burgos (Gaven), Mabini (Johnson South), Panganiban (Mischief) and McKennan (Hughes).

The Y-8 was designed as a military transport aircraft, but some variants are used for maritime patrol or signals intelligence, Amti said, warning that the landing on Zamora should be particularly concerning to the Philippines, which has 100 civilians and a small military garrison on Pag-asa (Thitu) Island just 22 kilometers away.

With the Zamora deployment, “military aircraft have now verifiably landed” on all three airstrips that China has built in the Spratlys, Amti said.

The first was a “naval patrol aircraft,” possibly a Y-8 or similar plane, which landed on Kagitingan Reef in April 2016 to evacuate three people who had fallen ill, it said.

“That landing was especially galling for the Philippines because an arbitral tribunal in 2016 ruled that [Panganiban] Reef is a piece of the Philippine continental shelf,” Amti said, referring to the ruling by the Permanent Court of Arbitration in The Hague that invalidated China’s claim to 90 percent of the South China Sea.

In addition to patrol and transport planes, the agency said, China has recently deployed other military platforms to the “Big Three” outposts at Kagitingan, Panganiban and Zamora reefs.

On April 9, The Wall Street Journal published satellite photos commissioned by the US government that showed military jamming equipment mounted on three trucks on Panganiban Reef in March.

The article cited a US official who said the jamming systems were deployed to Kagitingan Reef as well.

Amti said it had confirmed the systems were visible in satellite imagery of Panganiban from at least mid-February, and were still present as of May 6, although placed under covers.

Then on May 2, US news network CNBC, citing US intelligence sources, reported that China had deployed YJ-12B antiship cruise missiles and HQ-9B surface-to-air missile systems on Kagitingan, Panganiban and Zamora reefs as part of military exercises in early April.

China constructed missile shelters on the reefs in early 2017, Amti said, but the April deployments were the first confirmed placement of such platforms on the three reefs.

The Department of Foreign Affairs (DFA) has expressed concern over the missile deployments, but has not said what it intends to do.

Presidential spokesperson Harry Roque earlier said the government could not verify the deployments because it did not have the technology to do so.

Roque, however, said the government was acquiring equipment for verification.

Amti said China could be using the pattern it set at Woody Island, the largest of the Paracels, farther north, which are claimed by Vietnam, in the Spratlys.

“China has repeatedly deployed J-10 and J-11 fighter jets to Woody Island,” it said. “Considering that China has built identical hangars for combat aircraft at Woody and on each of the Big Three, it is likely that J-10s or J-11s will soon find their way south to the Spratly Islands.”

The deployment of Harbin Z-8 transport helicopters and a surveillance Harbin BZK-005 drone, believed to have been sighted on Woody Island in 2016, may also be expected in the Spratlys, it added.

Amti said there had been a growing presence of People’s Liberation Army Navy (PLAN), China Coast Guard (CCG) and fishing fleets at Kagitingan, Panganiban and Zamora.

“Satellite images show that PLAN destroyers, frigates and other combat ships and CCG patrol vessels regularly visit the artificial islands, along with many auxiliary and logistics vessels,” Amti said.

“The ubiquity of PLAN and CCG ships in images of [Kagitingan, Panganiban and Zamora reefs] since the start of 2017 suggests how robust the PLAN and CCG presence at the island bases has become,” it added.

There was no immediate comment from Malacañang or the DFA on Thursday.

The Senate plans to open an inquiry into the Chinese missile deployments on Kagitingan, Panganiban and Zamora on May 15.