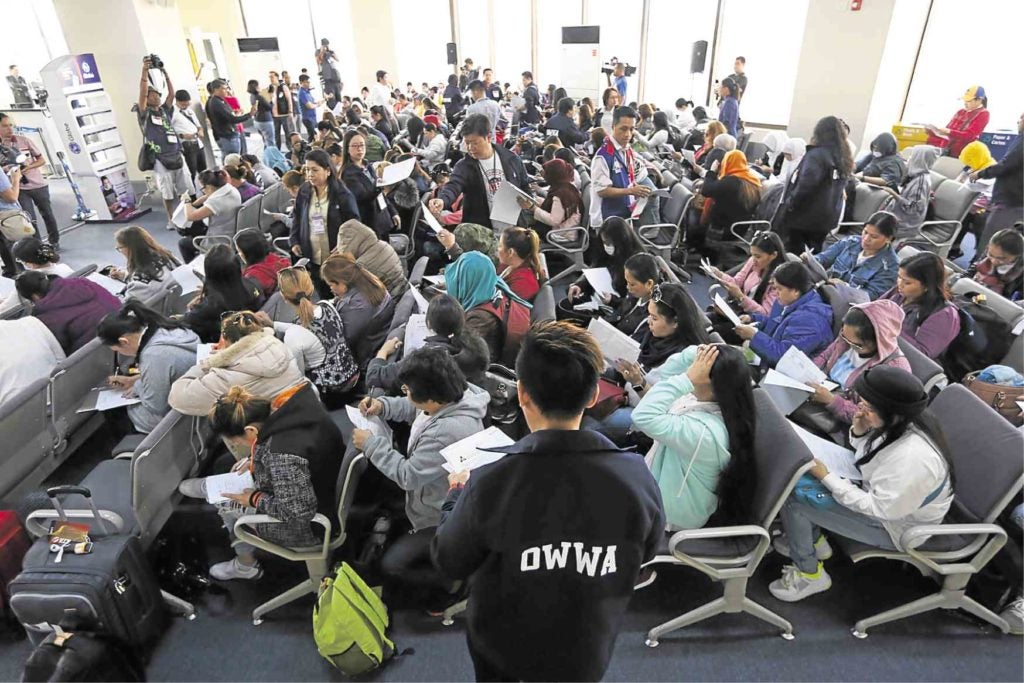 Kuwait has offered to pay for the travel expenses of over 600 undocumented Filipinos it has allowed to return to the Philippines, presidential spokesperson Harry Roque said on Wednesday.

In a briefing on Facebook live, Roque and Bello said the first batch of the returnees, numbering 150, would be going home with them on Saturday.

Roque said the two countries were ready to sign a memorandum of agreement (MOA) on Friday that would provide more protection for Filipino maids.

“I am confident that with the signing of the [MOA], there might be a partial lifting but not a full lifting of the deployment ban [of Filipino workers to Kuwait],” he said.

The former labor chief said the President had insisted on the inclusion in the MOA of his proposals for better working conditions for domestic helpers.

These include the safekeeping in the Philippine Embassy of the housemaids’ passports, eight hours a day of work and a minimum of seven hours of sleep, a weekly day off with pay, adequate food and decent sleeping quarters, as well as giving the maids the right to use cell phones.

Foreign Secretary Alan Cayetano was expected to fly to Kuwait from Riyadh, Saudi Arabia, on Friday to join Bello and the other officials credited with ending the three-week diplomatic crisis with the Gulf state.

Interviewed by reporters in Riyadh on Wednesday night, Cayetano said Kuwait granted all the government’s demands that he had relayed to Bello, including the formation of a special unit within the Kuwaiti police, with which the Philippine Embassy could liaison to quickly attend to OFW complaints.

Sen. Joel Villanueva said that with the agreement between the two countries, “cases of abuses against our overseas workers will be prevented and resolved in a swift and just manner.”

Meanwhile, Roque said that the Philippine and Kuwait governments would keep a close eye on the trial in Lebanon of Nader Essam Assaf, the employer of murdered Filipina domestic helper Joanna Demfelis. — WITH REPORTS FROM JULIE M. AURELIO AND LEILA B. SALAVERRIA