Hanoi to Beijing: Pull out missiles 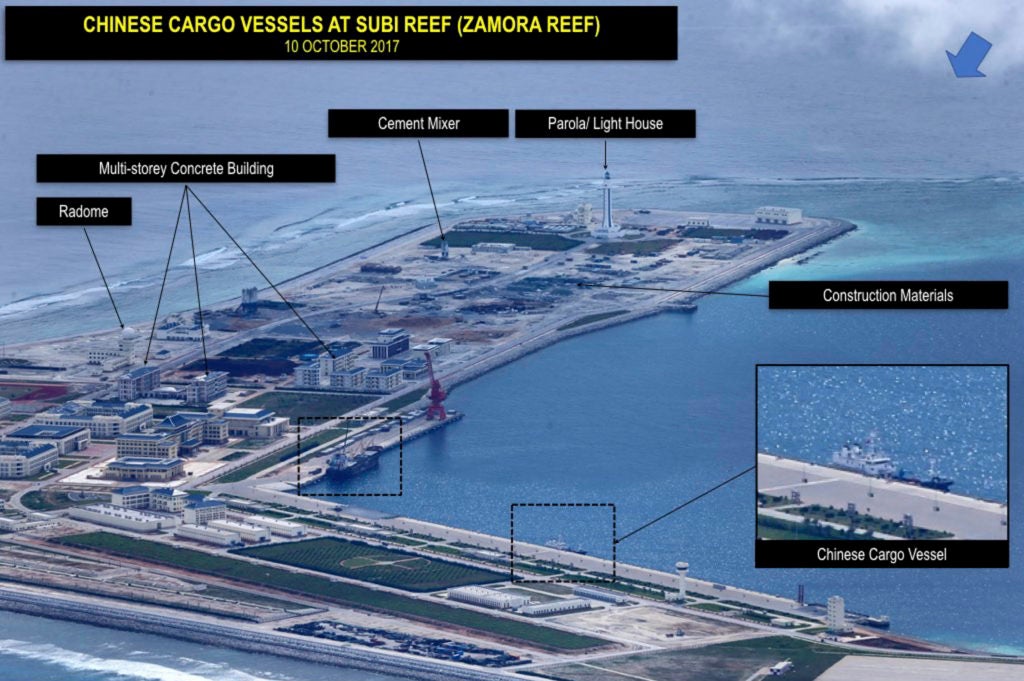 Vietnam has requested China to withdraw its weapons from disputed territory in the South China Sea, while security experts have urged the Philippine government to upgrade the country’s defenses in the Spratly archipelago in response to China’s militarization of the strategic waterway.

“Vietnam requests that China, as a large country, show its responsibility in maintaining peace and stability in the East Sea, do not carry out militarization activities, withdraw military equipment illegally installed on features under Vietnam’s sovereignty,” international news agencies on Wednesday quoted Vietnamese foreign ministry spokesperson Le Thi Thu Hang as saying in a statement on Tuesday, using the Vietnamese name for the South China Sea.

The statement came after US news network CNBC reported on May 2 that China had installed antiship cruise missiles and surface-to-air missile systems on three Philippine-claimed reefs in the Spratly archipelago that it had seized and transformed into artificial islands then developed into military outposts—Kagitingan (international name: Fiery Cross), Zamora (Subi) and Panganiban (Mischief).

“Vietnam is extremely concerned about the information [as reported] and reaffirms that all militarization activities, including the installation of missiles on Spratly islands, is a serious violation of Vietnam’s sovereignty,” Hang said.

China has earlier deployed similar weapons on Woody Island, the biggest feature in the Paracels archipelago farther to the north that Vietnam considers part of its territory.

No word yet from PH

While Vietnam has protested China’s missile deployment in the disputed waterway, the administration of President Rodrigo Duterte has yet to say what it intends to do about the installation of high-tech weapons on Philippine territory.

Several lawmakers have urged the Duterte administration to protest the missile deployment, but presidential spokesperson Harry Roque has said the government has yet to verify the information because it does not have the technology to do so.

The government, however, is acquiring equipment that will enable it to verify the missile deployments, Roque told reporters on Tuesday.

China has neither confirmed nor denied the installation of weapons on the three Philippine reefs.

The Philippines’ defense treaty ally, the United States, warned that China would face “consequences” over its militarization of the strategic waterway.

Vietnam and China have fought naval battles over their conflicting claims in the South China Sea, while the Philippines has taken—and beaten—China to the UN-backed Permanent Court of Arbitration in The Hague to resolve their own maritime dispute.

But instead of asserting the Philippines’ legal victory, the President, who came to power shortly before the tribunal handed down the decision in July 2016, mended fences with China and wooed the economic giant for aid, loans and investments.

China pledged to give the President billions of dollars in investment and aid. Beijing then proceeded to develop its military outposts on Philippine territory, which was discovered with the Inquirer’s publication of surveillance photos in February and April showing nearly finished bases with airstrips, at least one with two military transport planes on the tarmac.

Alarmed at the Duterte administration’s lack of initiative, lawmakers have called for legislative inquiries into China’s actions in the South China Sea.

Sen. Panfilo Lacson on Wednesday called for a meeting of the National Security Council to tackle China’s deployment of missiles on Philippine territory.

“If up to now the government still has not confirmed the presence of a foreign country’s missiles [on three] of our islands, we may have a serious national security problem. Convening the National Security Council is the least that we should do, given the situation,” Lacson said in a statement.

Security experts also urged the administration to upgrade the country’s outposts in the Spratlys, after the Inquirer reported that the Philippines has been left behind by its rivals in development of their claims in the South China Sea.

“It is not fair to our [troops at] hardship posts in [the Spratlys] that the government is hardly upgrading our facilities there, yielding to China’s objections,” former National Security Adviser Roilo Golez said on Wednesday.

The Philippines has stopped developing its outposts in the Spratlys to keep a 2002 claimants’ agreement  to maintain the status quo in the South China Sea.

But Golez said the government was “overdoing” its “act not to antagonize China by not reinforcing” the country’s defenses in the Spratlys.

Golez cited Vietnam’s development of its defenses in the South China Sea, saying Hanoi has demonstrated that “a good defense capability buildup is not incompatible with a vibrant economy.”

Despite past violence in their maritime dispute, Vietnam and China maintain economic ties, though Hanoi continues to oppose Beijing’s aggressiveness in the South China Sea, Golez said.

“The message: Be not timid in facing China,” he said.

Defense analyst Jose Antonio Custodio said the Philippines’ defenses in the Spratlys must be improved “to allow for greater survivability” in case of “any eventuality such as hostile incidents or even natural calamities.”

“Now, given that China has upped the ante by deploying missiles [on Philippine territory in the Spratlys], it becomes imperative to increase our defenses,” Custodio said.

Jay Batongbacal, director of the University of the Philippines Institute for Maritime Affairs and Law of the Sea, said upgrading the Philippines’ outposts in the Spratlys could serve a “symbolic purpose.”

“[It’s] demonstrating resolve even in the face of China’s intimidation. To do nothing would be to signal that we concede the South China Sea to China,” Batongbacal said. —With reports from Leila B. Salaverria and the wires