PH, Kuwait to sign MOA to protect OFWs on May 11 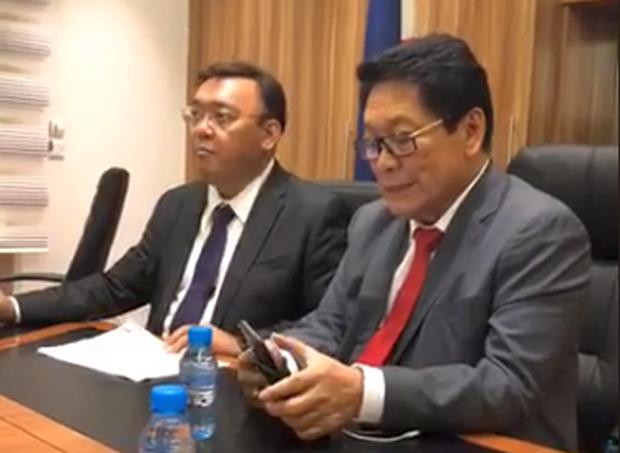 Presidential spokesman Harry Roque and Labor Secretary Silvestre Bello held a press conference at the Philippine Embassy in Kuwait on Wednesday, May 9, 2018. (Photo from a video posted by HARRY ROQUE on Facebook)

The Philippines and Kuwait will sign on May 11 a memorandum of agreement (MOA) to give protection to overseas Filipino workers (OFW) in the Gulf state, according to presidential spokesperson Harry Roque.

“The signing of the MOA is expected on May 11,” Roque said Wednesday during a press briefing at the Philippine Embassy Kuwait, a video of which was posted on his Facebook Page.

Under the MOA, Roque said the Philippines and Kuwait would create a special unit of police that would coordiante with the Philippine Embassy reagrding complaints of OFWs.

Roque said the MOA would also have provisions that would allow OFWs to have eight hours minimum of sleep and to keep their cellphones with them so they could call for help in case of emergencies.

He added that the deal would order employers to provide food to Filipino domestic workers, give them one day off a week, and deposit their passports at the Philippine Embassy.

Bello said the Kuwaiti government had agreed to allow the return of undocumented OFWs to the Philippines at their expense.

Roque said 150 OFWs would already join them in returning to the Philippines on May 11.

Bello said he would recommenend to President Rodrigo Duterte a “partial lifting” of the deployment ban in Kuwait.

The Philippine government has imposed a ban in Kuwait following the reported abuse of OFWs there, particularly the death of Filipino maid Joanna Demafelis, whose body was found inside a freezer in an abandoned apartment a year after she was reported missing. /atm