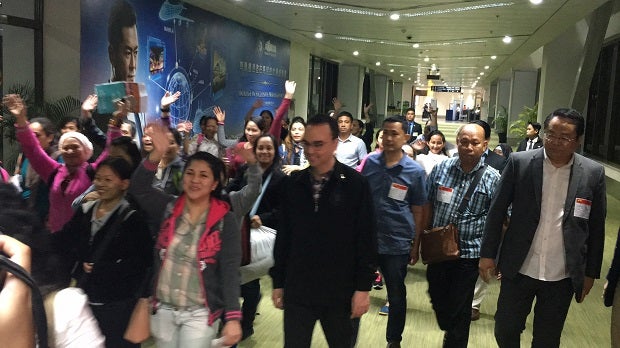 Foreign Secretary Alan Peter Cayetano said the relationship of the Philippines with Kuwait was moving in a “positive direction” amid a diplomatic row that rose from an alleged breach of international rules during the rescue of distressed Filipinos in the Gulf state.

Proof of this, Cayetano said, was the return of 61 overseas Filipino workers from Kuwait on Saturday night, the first batch of Filipinos to return home even after the amnesty period ended on April 22.

On board flight PR 669 which arrived in Manila at 10:40 p.m., the returning OFWs were welcomed by Cayetano, Assistant Secretary Mocha Uson, and personnel of the Overseas Workers Welfare Administration.

Cayetano said there were around 700 OFWs at the embassy shelter house waiting to be sent home in the next weeks. An additional 120 Filipinos also requested for assistance.

Despite the diplomatic standoff with Kuwait, Cayetano gave the assurance that the safety of Filipinos was being “prioritized.”

“We can repair our relationship with other countries. But we can’t go back in time to save a Filipino who was killed or raped,” he told the returning OFWs.

Cayetano noted that the “assistance” given to the OFWs “properly followed protocols” as “not to offend and there will be no ill-feeling” on the part of the Kuwaiti government.

The DFA secretary said the embassy was coordinating with the Kuwaiti foreign ministry and their police extended help for OFWs who need assistance in “special cases.”

“I can say that it is moving in positive direction,” Cayetano told reporters about the talks on the mending of the bilateral relations of the two countries.

Four Filipinos who were hired as drivers were arrested, while three of Manila’s diplomats were facing charges of kidnapping for the supposed rescue mission.

The DFA admitted Filipino diplomatic staff were holed up inside the embassy in Kuwait, but assured “they are all doing well.”

Cayetano did not disclose information about the on-going investigations by the two foreign ministries, saying it was a “very sensitive topic, that anything we say may cause another miscommunication.”

Asked on the status of the proposed memorandum of understanding (MOU), which aims for a better treatment of OFWs in Kuwait, Cayetano answered: “We are moving forward, but we are doing it in private.”

He said the repatriation of Filipinos who wanted to go home was necessary before the President signs the MOU.

Duterte had set the MOU with Kuwait as a condition to lift its deployment ban on Filipino workers. The President ordered the ban in February after the body of Filipino maid Joanna Demafelis was found inside a freezer in Kuwait. /cbb