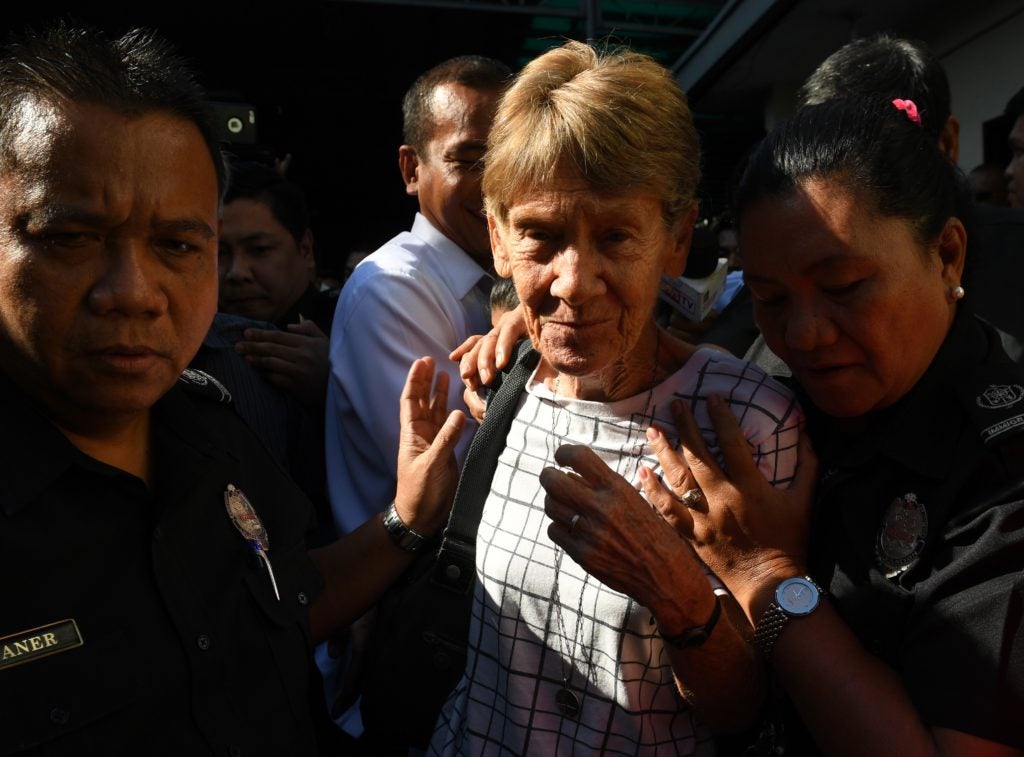 This photo taken on April 17, 2018 shows Australian catholic nun Sister Patricia Fox (C) being escorted by immigration officers while leaving a detention facility after her release at the Immigration headquarters in Manila, a day after she was arrested. The Philippines on April 25 ordered the deportation of an elderly Australian nun who angered President Rodrigo Duterte, accusing her of engaging in illegal political activities outside of her missionary work. / AFP PHOTO / TED ALJIBE

As the government ordered her to leave the Philippines, Australian nun Patricia Fox looked at the brighter side and took advantage of the situation to reminisce the 27 years of “learnings and beautiful memories” she had with Filipinos.

In a statement, Fox said: “I will be forever grateful to all those Filipinos that I call my friends and for all those from both church and sectors who have supported me through this time.”

The 71-year-old Australian missionary recalled that it was in 1990 when she volunteered to come with her congregation to the Philippines.

“I eagerly volunteered as I had Filipino friends in Australia. It took a while to become a bit enculturated as things are done differently but the people in the rural areas where I spent most of my time were so patient and laughing with me at my mistakes,” Fox said.

“It was through them that I came to learn some of the basic issues which caused their poverty: lack of their own lands, control of markets, dependence on pesticides,” she also said.

Fox also recalled staying with tribal people and learning how they lived in the mountains. She also observed how excited they were to have their own schools that taught sustainable agriculture, and at the same time preserved their culture.

However, Sister Pat, as she was fondly called in the community, lamented how large mining and logging corporations as well as plantations threatened the lives and livelihood of indigenous communities.

As she lived in the country’s urban cities, Fox said that she also came to know the situation of Filipino workers and their lack of job security, which was also happening in other countries.

“As a Christian, believing that our mission is to bring God’s Kingdom to the here and now, I couldn’t help but to get involved (in) both with projects, such as training in organic farming, to uplift the livelihood of the farmers but also to advocate with them for their rights to land, livelihood, peace, justice and security, all universal human rights which the church sees as integral to her mission,” Fox said.

“It seems this is what has brought me into conflict with the Philippine Government,” she pointed out.

The Australian nun said she was surprised when she had heard of the news that the Bureau of Immigration (BI) had ordered her to leave the country after her missionary visa was forfeited.

“I was surprised, as I had thought the process was that I would have 10 days to put in a counter-affidavit to answer the charges. It was through the media that I heard of the decision, as I, or my legal counsel, don’t yet have a copy. I am very sad that the decision at present is that I leave the Philippines,” Fox said.

“I may lose my right to be in the Philippines but I can never lose the learnings and beautiful memories,” she further said.

Fox, however, said that she was “still hoping for a chance to explain how I see my mission as a religious sister and maybe the decision can be reconsidered.”

READ: Fox’s counsel: We are ready to bring case to CA, SC

The BI ordered Fox to leave the country in 30 days after her missionary visa was forfeited over her alleged participation in partisan activities.

But Fox’s counsel, Atty. Jobert Pahilga, said they are prepared to take the case before the Court of Appeals (CA) and even to the Supreme Court (SC).

Pahilga, in a television interview, said that they would first file a motion for reconsideration before the BI to dispute the visa cancellation over Fox’s alleged involvement in partisan politics.

They would then elevate the case to the CA, and further to the SC, if needed, should the BI deny their motion.

The Australian missionary, also a known human rights advocate, was arrested by immigration agents on April 17 and was detained at the BI office for a day.

She faces possible deportation for being an “undesirable alien” as she was accused of joining anti-government protest rallies, in violation of the terms and conditions of her missionary visa.

Fox, however, was not yet for deportation since her case was still pending before the BI since she has yet to submit her counter-affidavit.

READ: Sister Fox’s visa a privilege, not a right – BI

But forfeiting her visa was a different case. BI spokeswoman Antonette Mangrobang explained that it is the bureau’s discretion whether or not it would cancel a foreigner’s visa.

“The issuance and grant of a visa is a privilege, not a right, hence a hearing is not necessary in visa forfeiture proceedings,” Mangrobang said in a text message. “The foreigner may file his or her motion for reconsideration.”