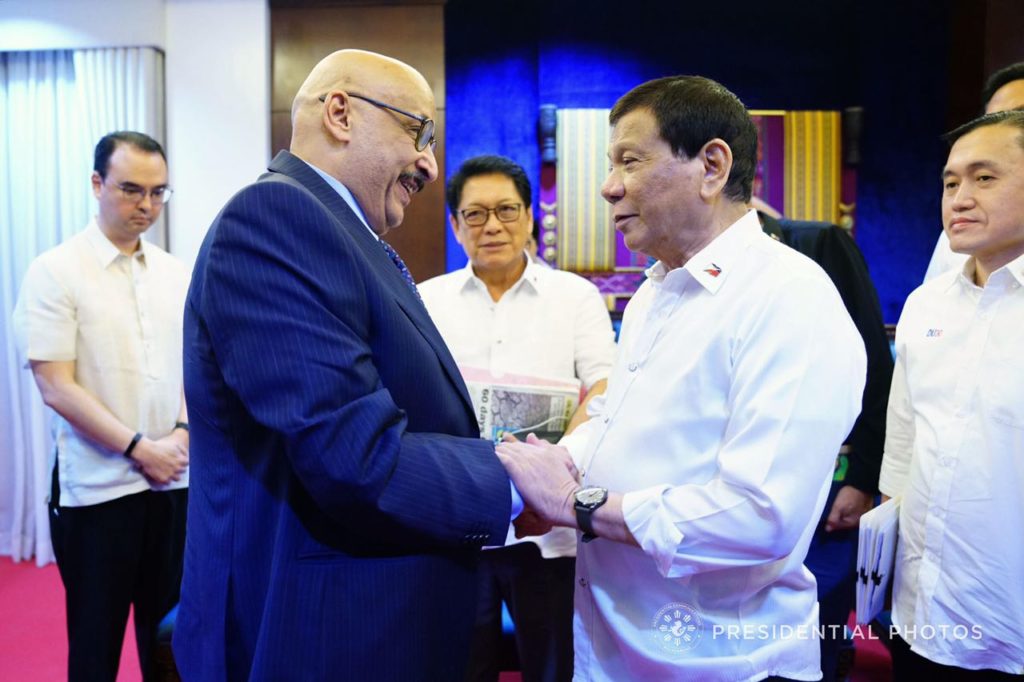 President Rodrigo Duterte meets with Ambassador of Kuwait to the Philippines Musaed Saleh Ahmad Althwaikh at the Presidential Gusest House in Davao City on April 23, 2018 amid the deployment ban of overseas Filipino workers (OFWs) in the Gulf state. (Photo from the Presidential Photographers Division)

DAVAO CITY — President Rodrigo Duterte on Monday summoned several Cabinet and other officials over a new row with Kuwait that had led to a diplomatic protest by the Gulf state, a threat to expel the Philippine ambassador, and the arrest of two Filipinos allegedly for enticing housemaids to run away from their employers’ homes.

A Malacañang source who did not want to be identified said the President had summoned to Davao Foreign Secretary Alan Peter Cayetano, Labor Secretary Silvestre Bello III, Environment Secretary Roy Cimatu (the special envoy to the Middle East) and Ambassador to Kuwait Renato Pedro Villa.

Cayetano met with Althwaikh in Manila earlier on Monday after he welcomed Filipino migrant workers returning from Kuwait at Ninoy Aquino International Airport.

The source said Cayetano explained to the President that the Philippine Embassy mission to rescue abused housemaids last week had been coordinated with the Kuwaiti authorities and that the sovereignty of Kuwait had not been violated.

But the rescue turned into a controversy on Saturday after a video showing a team from the Philippine Embassy in Kuwait enticing Filipino maids to flee their employers’ homes went viral.

The video prompted Kuwaitis to protest in front of the Philippine Embassy, demanding respect for the sovereignty of Kuwait.

Police arrested two members of the Philippine Embassy staff and the Kuwait foreign ministry summoned Villa thrice for a dressing down over comments he made that were reported in local press about the embassy’s effort to rescue domestic workers who were abused by their employers.

Villa was quoted in the reports as saying that the Philippine Embassy was moving in to help the abused if Kuwaiti authorities fail to respond within 24 hours.

In the video, he is heard saying the Philippines does not need the help of the Kuwaiti government to rescue Filipinos in distress.

The foreign ministry handed him two notes of protest over his “inflammatory comments.”

A foreign ministry source said Villa’s remarks, along with the “inappropriate behavior” of the Philippine Embassy staff, had been deemed a threat to Kuwait’s sovereignty.

The two Filipinos who were arrested reportedly acknowledged convincing the maids to leave.

It was unclear what law the two men were accused of violating, though the Kuwait news agency Kuna said they “confessed to the crime in addition to other similar offenses that had been committed in various regions of the country.”

Kuna reported that Kuwaiti lawmakers condemned the activities of the Philippine Embassy staff, with Member of Parliament Abdulkareem Al-Kandari saying what the Filipinos did was a clear violation of Kuwait’s sovereignty and MP Faisal Al-Kandari calling for the expulsion of Villa.

The Kuwaiti interior ministry said it viewed the incident with grave concern and pledged that it would deal with those involved in the rescue of the maids with the full force of the law.

The controversy erupted just as the President was preparing to visit Kuwait to witness the signing of an agreement for the protection of Filipino migrant workers in the Gulf state.

The agreement would have eased a ban that he imposed in February on Filipino labor traffic to Kuwait following the murder of domestic helper Joanna Demafelis, whose body was discovered in a freezer a year after she had been reported missing.

They were tried in Kuwait in absentia in early April. They were found guilty and sentenced to death by hanging.

The quick action by Kuwait helped to ease tensions with the Philippines—until last week’s rounds by the Philippine Embassy team that led to the rescue of 27 maids and the Kuwaitis’ protest.

In his talk with reporters on Monday, Cayetano said Villa had explained the incident but the Department of Foreign Affairs (DFA) also had to reply to the Kuwaitis “because the way the (notes of protest) was delivered was quite strong and our ambassador was summoned three times.”

Cayetano said that while the diplomatic protest was directed at Villa, there was no “explicit” demand that the ambassador leave Kuwait.

Cayetano said the Philippine Embassy had coordinated the rescue operations with Kuwaiti authorities but had to conduct the rescue in cases “where there is grave danger and we are talking of life-or-death” situations involving Filipino domestic workers.

“How can it be an abuse [diplomatic immunity] if it was done in coordination with [their] government and we are talking of life-or-death situations?” he said.

The DFA did not identify the two Philippine Embassy staff members who were arrested in Kuwait over the rescue operation.

In Malacañang, presidential spokesperson Harry Roque said he hoped the controversy would not affect the agreement for better working conditions for Filipino workers in Kuwait. —With reports from the wires

10 PhilHealth board members to face raps over irregularities — PACC