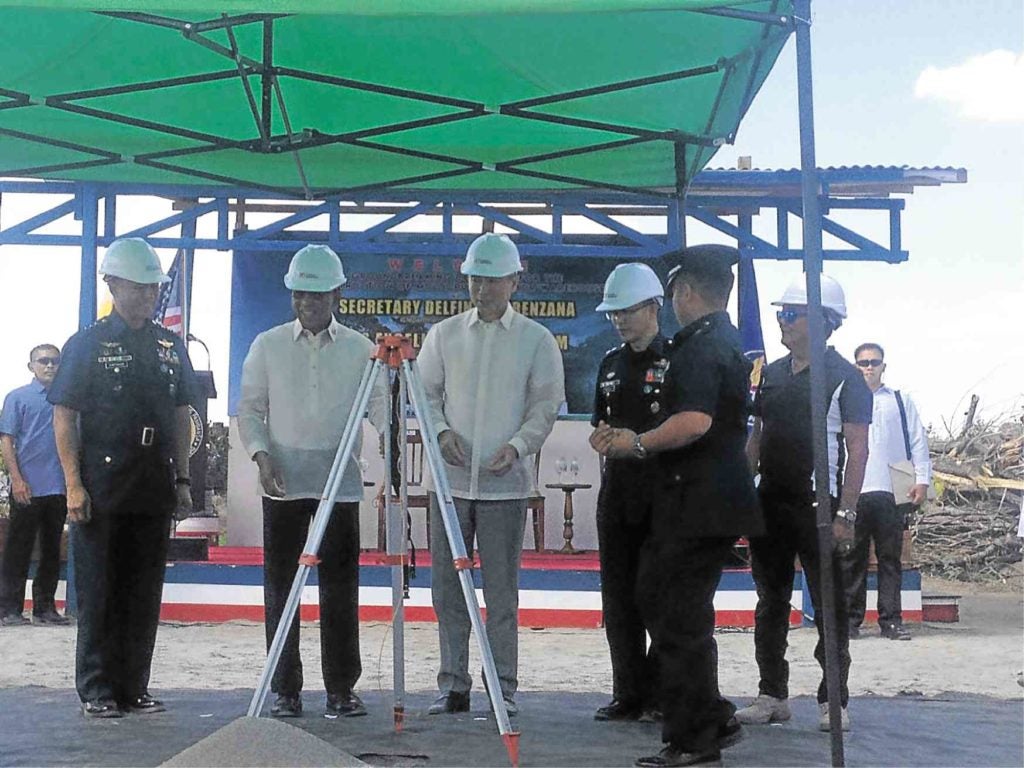 Defense Secretary Delfin Lorenzana (second from left) and US Ambassador to the Philippines Sung Y. Kim (third from left) lead the groundbreaking ceremony for a multipurpose Humanitarian Defense Response Warehouse at Basa Air Base in Pampanga.

FLORIDABLANCA, Pampanga — Defense Secretary Delfin Lorenzana on Tuesday broke ground for the construction of a warehouse at Basa Air Base here to house equipment to be used in disaster response.

Called the Humanitarian Defense Response Warehouse, the facility is the first of five projects under the Enhanced Defense Cooperation Agreement (Edca) between the Philippines and the United States.

Lorenzana said the warehouse would store 6 x 6 trucks, rubber boats, several fueling stations and tents. It will also respond to the “evolving security challenges and promote peace” in the Asian region, he said.

Basa Air Base was selected because of its strategic location being nearer to Metro Manila, he said.

Edca grants American troops to build installations in select areas of the country. It was signed in 2014 by then Defense Secretary Voltaire Gazmin and his American counterpart, and was declared constitutional in 2016 by the Supreme Court, which defined it as an executive agreement.

Noting that Edca highlights the United States’ strong alliance, shared values and history with the country, American Ambassador Sung Kim said all Edca facilities would be under the control of the Philippine military.

Lorenzana also described Edca as part of US support to the Armed Forces of the Philippines’ modernization program. The warehouse will also serve as a defense command control center, according to Maj. Gen. Galileo Kintanar Jr., chief of the Philippine Air Force. —CARMELA REYES-ESTROPE