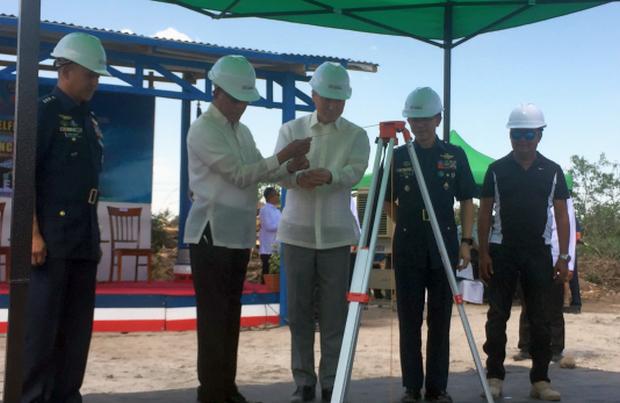 Defense Secretary Delfin Lorenzana (second from left) and US Ambassador Sung Kim (beside him)  lead the groundbreaking of the first major Edca project at Basa Air Base in Pampanga on Tuesday, April 17, 2018. (Photo by FRANCES MANGOSING / INQUIRER.net)

BASA AIR BASE — The United States will finally carry out its upgrade and expansion of its facilities in Philippine military bases as part of a deal signed with the Philippine government in 2014.

The Enhanced Defense Cooperation Agreement (Edca) allows the US to station its troops and store its assets at the bases they will build for their humanitarian assistance and maritime security operations.

The agreement between the Philippines and US was signed four years ago amid rising tensions caused by China’s sweeping claims in the South China Sea, one of the world’s busiest trade routes.

The groundbreaking ceremony for the construction of a facility at Basa Air Base in Floridablanca, Pampanga on Tuesday was led by Defense Secretary Delfin Lorenzana and US Ambassador to Manila Sung Kim.

“As we break ground at the very first major Edca project, we look forward to continuing to work closely with Philippine government for future Edca projects at the five agreed locations…The Philippines of course will maintain full control of facilities,” Kim said in a speech.

Aside from Basa Air Base, the other military facilities that the Philippines has allowed the US to use are Antonio Bautista Air Base in Palawan, Fort Magsaysay in Nueva Ecija, Lumbia Airport in Cagayan de Oro and the Mactan-Benito Ebuen Air Base in Cebu. /atm