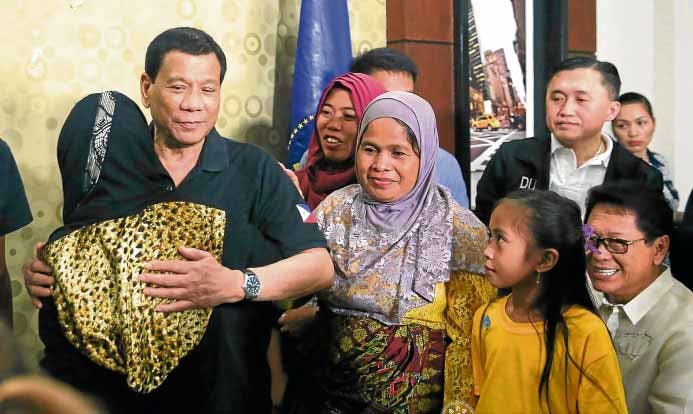 WELCOME HUG President Duterte welcomes Pahima Alagasi, a returning migrant worker who was maltreated by her employer in Saudi Arabia four years ago, and her family during ameeting in Davao City on Saturday. —MALACAÑANG PHOTO

DAVAO CITY — President Rodrigo Duterte on Saturday reiterated that the government was doing everything it could to put an end to abuses against Filipino migrant workers in the Middle East.

The President gave the assurance to Fahima Alagasi, the Filipino maid who suffered serious injuries in 2014 when her employer’s mother poured boiling water on her, during their meeting here, Special Assistant to the President Christopher Go said.

Go said the President told Alagasi, a native of Pikit, North Cotabato province, that he was not blaming migrant workers for what they were going through in the Middle East because they had been driven there by poverty.

But while the President reminded migrants to be extra careful in foreign countries, where the culture and law differed from the Philippines, he gave assurances the government would help “in any way we can to assist them, be it a legal matter or be it labor and employer related,” Go said.

He said the President told Alagasi that the government would always work so that the interest and well-being of Filipino migrant workers would be upheld.

In April last year, the President flew to Riyadh to witness the signing of an agreement for better protection for Filipino workers in Saudi Arabia.

The agreement ended long work hours and the withholding of passports, among other things.

Recently, the Kuwaiti government also agreed to regulate working conditions for Filipinos in the Gulf state.

The agreement came after the President ordered a ban on the deployment of new workers to Kuwait over the death of Filipino maid Joanna Demafelis in the oil-rich Arab country.

He said he would travel to Kuwait for the signing of the agreement.

Under the deal, Filipino maids would be allowed a day’s rest each week and that they can keep their passports.

They would also be allowed to use cell phones so they could keep in touch with their families in the Philippines.