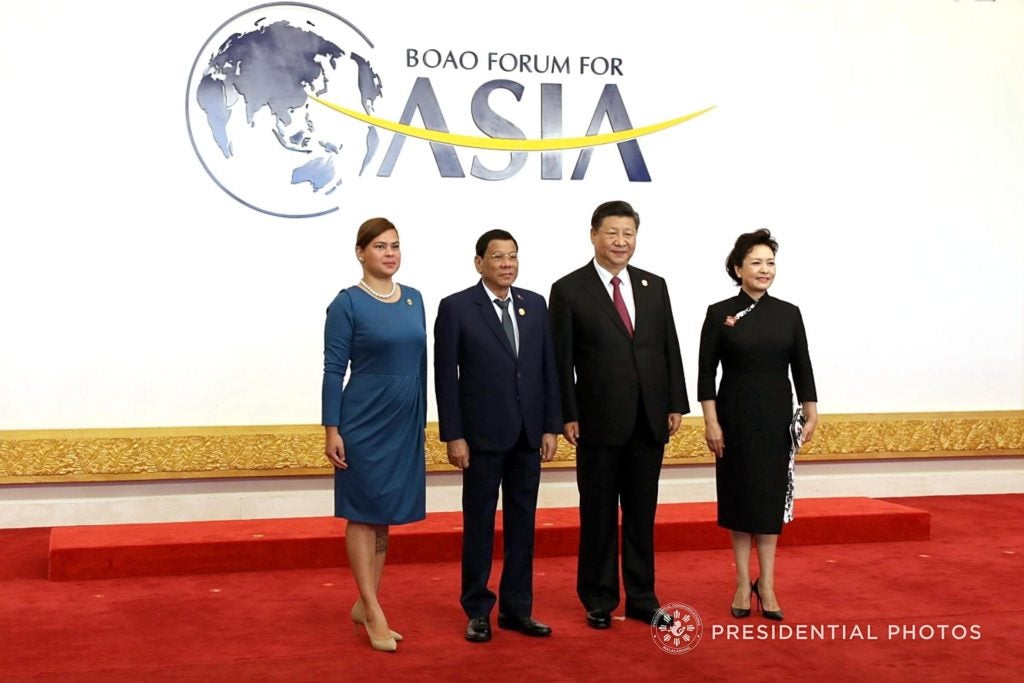 HAINAN, China — President Rodrigo Duterte on Tuesday witnessed the signing of an estimated $9.5 billion worth of investment agreements with Chinese businessmen, which could generate some 10,800 jobs for Filipinos.

The signing of the letters of intent was done on the sidelines of the Boao Forum for Asia, a gathering of world leaders, businessmen and educators.

The President praised the investment pledges as a sign of the “vigorous momentum” of Philippines-China ties.

“Allow me to say that the growing trade and investments reflect the vigorous momentum of the Philippines-China relations and highlighting the Chinese position as our largest trading partner and our largest export market together with Hong Kong,” he said.

“I acknowledge the job opportunities that will be created by Chinese investments now and in the years to come and their role in promoting inclusive growth and encouraging entrepreneurship among Filipinos,” he said.

He stressed that the Philippines on his watch was committed to good government and to improve the business climate in the country.

Business deals between the Philippines and China during the Arroyo administration were marked by corruption.

In the NBN-ZTE broadband network deal, a whistleblower came out to allege that government officials were asking for kickbacks from the project.

Barba said the signing of the letters of intent was an indication of the increasing Chinese confidence in the Philippine economy and their belief that the country could sustain its 6.7-percent economic growth for the next five years.

He also said the number of Chinese businessmen formalizing their interest to invest in the Philippines could increase in the coming days, as a delegation is expected to visit the country to explore other businesses.

The biggest planned investment in the Philippines came from the Shangai GeoHarbour Group, which earmarked $3.46 billion for land reclamation, sludge remediation and land development.

The other companies that signed pledges were the Jovo Group Co. Ltd. Guangdong, which wants to build and operate a liquefied natural gas receiving terminal; Zhongfa Group, which seeks to develop large tourism projects, electronic industry parks, and proposes to establish a Philippines-China Trade and Investment Strategic Center; Haocheng Group, which eyes infrastructure and construction projects and thermal power supply.

Before leaving for China on Monday, the President heaped praises on Chinese President Xi Jinping, saying he “simply loves” the Chinese leader and that he “needs” China, which has promised him financial aid.