Poe: Keep searching for justice until suspects in Demafelis slay are punished 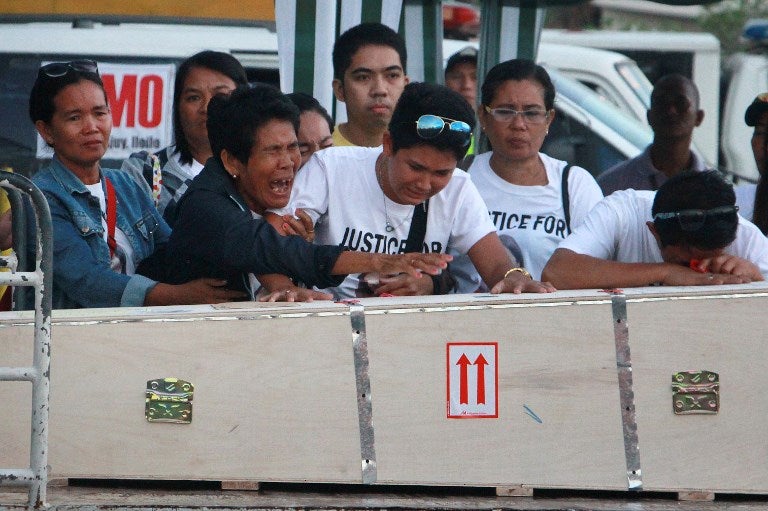 Eva (2nd L), mother of Filipina worker Joanna Demafelis whose body was found inside a freezer in Kuwait, cries in front of the wooden casket containing her daughter’s body shortly after its arrival from Manila at Iloilo International Airport in Iloilo province, central Philippines, on February 17, 2018. / AFP PHOTO / –

The search for justice should continue until all those responsible for the death of overseas Filipino worker (OFW) Joanna Demafelis are punished, Senator Grace Poe urged on Monday.

“Swift and sure justice is what Joanna Demafelis deserve. But the search for justice should not stop in its tracks until all those responsible for the fate of Joanna are punished,” Poe said in a statement, after a Kuwaiti court on Sunday sentenced the couple accused in Demafelis’ death.

It was reported that a Lebanese man and his Syrian wife were sentenced to death by hanging for killing 29-year-old Demafelis, whose body was found in a freezer in Kuwait last February.

He added that the role of the DOJ was “crucial” because the owner of the recruitment agency that employed Demafelis has yet to surface.

“We are calling on the owner of Our Lady of Mount Carmel Global Solutions to surrender himself and disclose the manner by which Joanna had been recruited,” Bertiz said in a statement, Monday.

Poe, chair of the Senate committee on public services, said Demafelis’ struggle was a reflection of the same reason why many Filipinos are working abroad.

The senator has likewise called on the government to expedite the signing of the memorandum of understanding between the Philippines and Kuwait “for the greater protection of overseas Filipino workers.”

“We also hope that such understanding be present in other countries with OFW population. We must remain vigilant in ensuring that the rights and welfare of OFWs are protected, and government is always at hand to assist them,” Poe added.

Labor Secretary Silvestre Bello III had announced the total deployment ban of workers to Kuwait following the discovery of Demafelis’ body inside the freezer of her employers’ abandoned apartment in Kuwait. /je