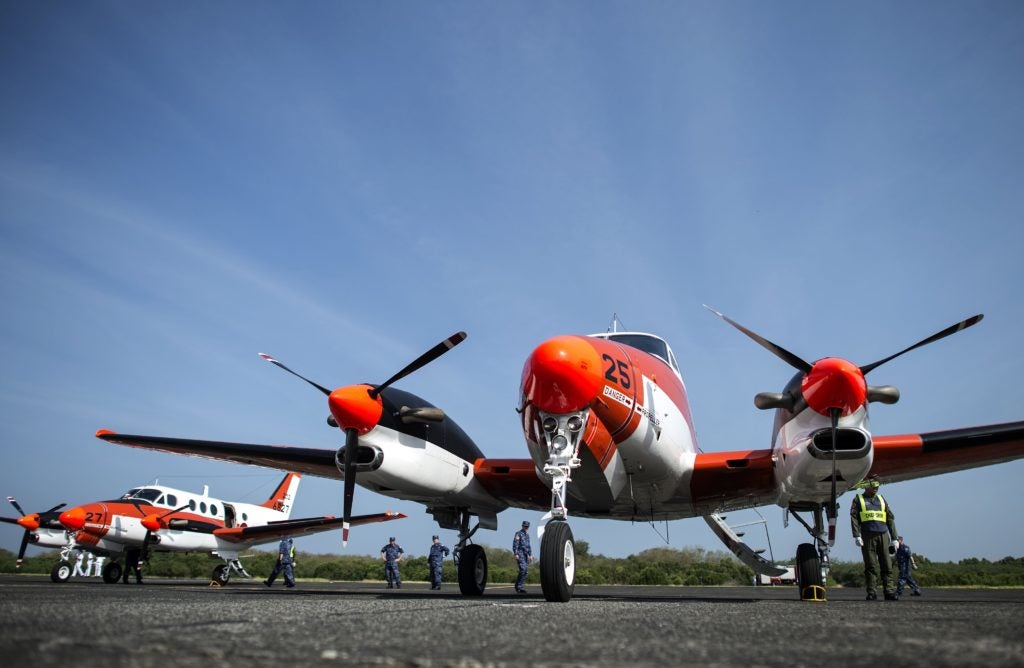 Two of the three Beechcraft TC-90 aircraft are parked on the tarmac in Sangley Point after arriving from Japan. —AFP

SANGLEY POINT, Cavite — Defense Secretary Delfin Lorenzana on Monday said the country had been managing “very well” its territorial dispute with China over the West Philippine Sea (WPS), but this remained a security challenge.

Lorenzana accepted three Beechcraft TC-90 planes donated by Japan that he said would immensely improve the Philippines’ capability to gather intelligence in the disputed waterway.

Lorenzana, in a press conference at the Naval Base Heracleo Alano here, said the Philippines had been managing the sea dispute “very properly and very well,” describing its relationship with China as “very strong.”

“We must admit that much still has to be done to boost our military capability, equipment in order to meet a number of persistent maritime security challenges,” he added, citing the territorial disputes with China, and other countries, over resource-rich areas in the WPS, the part of South China Sea that is within the country’s 370-kilometer exclusive economic zone.

China claims almost the entire South China Sea, where about $5 trillion worth of sea-borne goods pass every year. Brunei, Malaysia, the Philippines, Taiwan and Vietnam also have conflicting claims in the strategic waterway.

Tensions between the Philippines and China over areas in the WPS have eased since President Duterte came to power in July 2016 and improved relations with Beijing by opening the country to bigger Chinese trade and investments.

The TC-90s would “fill the gap in our maritime surveillance, so the effect is huge, and it will ensure also that we can patrol our maritime domain and ensure security of passage of all ships,” Lorenzana said.

But the planes, he added, would also be used for other missions such as humanitarian assistance, antipiracy, antiterrorism and border protection. So apart from the WPS and Benham Rise, they will be flying over the Sulu Sea, he said.

Japan’s donation was one way of supporting the Philippines’ position that there should be freedom of navigation operations in the disputed sea, according to Fukuda, who flew to Manila to witness the formal transfer of the aircraft.

“What we hope first, by providing the TC-90s to the Philippines, is that more support would be provided by the Philippine government to its citizens. By the operation of the TC-90, we could start with the Philippines working for open and free oceans and maritime security,” Fukuda said in a news briefing.

Japan planned to lease five surveillance planes but decided last year to transfer the aircraft without cost after changes were made in Tokyo’s self-defense forces law, allowing donation of excess defense and military equipment to partner countries.

The Navy said the surveillance planes have a range of 2,000 km and could patrol into China’s seven artificial islands in the Spratlys, which had been converted into military bases. —With a report from the wires