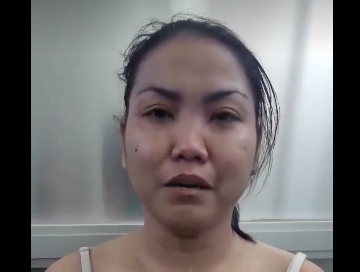 An almost incomprehensible Bretchielyn Magsayo faced the camera to relay her story of abuse in the brutal hands of her employer in Kuwait, and her desperate pleas to be rescued.

In a harrowing Facebook video by a certain A. Ramos uploaded via netizen Anthony Enriquez on March 10, Saturday, Magsayo showed the purple bruises on her arms and thighs to the camera, as well as the cigarette burns she sustained on her shoulders and wrists.

(They made these burns. They did these. I hope you can help me.)

(This was hit by a cooking implement. Please help me, please rescue me as soon as you can, I want to go back home to the Philippines. Will you please help me? I am asking for your help.)

Aside from the huge bruise on her right arm, another big purplish and yellowish bruise is above it. Cigarette burns can also be seen below the huge bruises, still on that arm alone.

Magsayo works as a Filipino maid for her employer in the address Zunup Sura Zhajra, Block 5, Street 514, House 24. It was revealed that she is usually beaten black and blue by her employer.

In another video uploaded by Enriquez, Magsayo is seen hiding inside the bathroom as a companion told her to ask for help while being recorded on camera. As her videos and pictures went viral on social media, it didn’t take long for the authorities to rescue Magsayo.

(Britchie has been rescued. We will help her file a case against her employer. What’s sad is she also has a case for absconding.)

Ignacio explained in the comments section of the post two days ago that in Middle Eastern law, people are not allowed to be rescued unless it is done by the police. In Magsayo’s case, it was her fellow Filipino acquaintances who rescued her from her employer’s home.

(Those who took her are not from the embassy. They are people she knew. Even people from our embassy could not execute a rescue on our own. They will be arrested. It’s the police who must do it. That’s what’s painful about it, because that’s the law in the Middle East.)

Not much is known about Magsayo’s employer, except that he is a police officer in Kuwait. It is inferred that this may be one of the reasons why Magsayo found it difficult to ask for help from Kuwaiti authorities.

The only hitch in Magsayo’s case is that after she was rescued from her employer’s home, she was not immediately brought to the Philippine Embassy nor OWAA, as per Ignacio: “Itinakas ng mga Pilipino at dinala sa bahay nila hindi sa Embassy nor sa POLO, OWWA. Dun tayo nadagdagan ng problema. Hindi malayo na yung nag-rescue ay maparusahan din.”

(She fled with the help of Filipinos, and they brought her to their house, not to the embassy nor at POLO, OWWA. That’s how we got more problems. It’s probable that those who rescued her will be punished too.)

In Ignacio’s latest Facebook update three hours ago, he announced that a case has been filed against Salem Shaaban Al Shaati, the employer of Magsayo. JB

The story of OFW lives