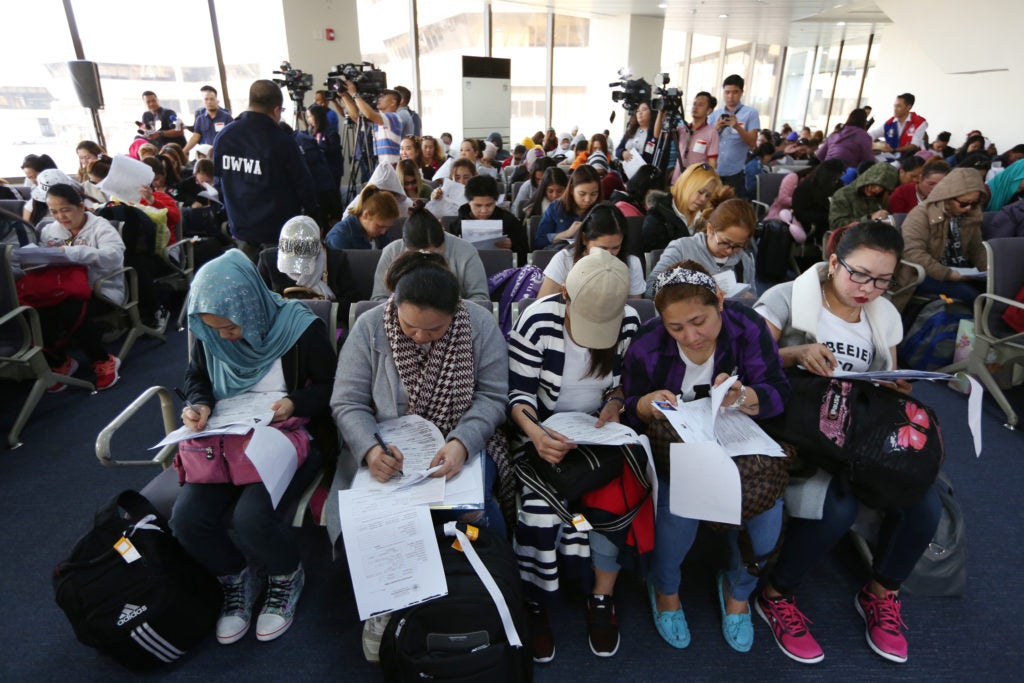 SANTIAGO CITY — The government is asking host countries in the Middle East to scrap the “kafala” system, a workers’ sponsorship practice that has been blamed for the exploitation of overseas Filipino workers (OFWs), according to a top labor official.

The kafala requires a company, often referred to as the “kafeel,” or employer, to sponsor foreign workers in the validation of their alien work visas and residency.

A foreigner’s right to work and legal presence in a Gulf state is therefore dependent on his or her employer, making the worker vulnerable to abuse, according to lawyer Bernard Olalia, administrator of the Philippine Overseas Employment Administration.

“Kafala is really wrong, and so we are looking at ways by which we could have it abolished,” said Olalia, who attended the opening of the One-Stop Shop Service Center for OFWs  here on Friday.

He talked about OFW “horror stories” that had compelled President Rodrigo Duterte to ban the deployment of workers to Kuwait.

Deployment bans are also being considered in other countries in the Middle East where many cases of abuses on OFWs have been reported, he said.

“Before, the story is of our OFWs being made to sleep on top of refrigerators. Today … they are now being stored inside refrigerators,” he said, referring to the case of Joanna Demafelis, the domestic worker whose remains were found stuffed in a freezer in an abandoned apartment in Kuwait last month.

A task force sent by Labor Secretary Silvestre Bello III to the Middle East will submit its recommendations on how the government could best address problems faced by OFWs, including the termination of the kafala practice.

The recommendations will form part of the employment terms to be pushed by the Philippines in bilateral agreements that it will try to forge with Gulf countries where OFWs are deployed, Olalia said.

He said the government would ask that Filipinos be exempted from the kafala, which also requires migrant workers to first obtain permission from the kafeel before they can transfer employment, or leave the country for any reason.

Recent reports showed that OFWs were being traded by employers as if they were personal property.

There are cases of kafeel taking advantage of this arrangement by underpaying or not paying foreign workers at all, or forcing them to take on excessive workloads, according to the Department of Foreign Affairs (DFA) website.

Some kafeel have committed criminal acts such as forced confinement and physical and sexual abuse or homicide, much like the Demafelis case.

Migrant workers usually escape from their employers and seek refuge elsewhere, which is a crime in many Gulf states, the DFA said.

“Among the rights we want to uphold in these agreements is for host countries to make sure that the worker retains possession of his or her passport, and he or she will be allowed to have a constant line of communication to the family in the home country,” Olalia said.

Once bilateral agreements are finalized, the country can start to push for the signing of an international convention on foreign workers, he said.