Duterte says of ICC lawyers: ‘These guys do not know their law’ | Global News

Duterte says of ICC lawyers: ‘These guys do not know their law’ 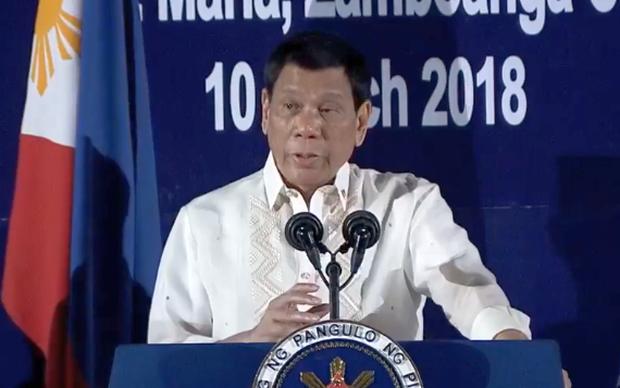 President Rodrigo Duterte talks to troops at the Edward Andrews Air Base in Zamboanga City on Saturday, March 10, 2018. (Photo from an RTVM video)

ZAMBOANGA CITY – The lawyers from the International Criminal Court (ICC) don’t know their law, according to President Rodrigo Duterte.

“I happen to be a lawyer,” Duterte said on Saturday during his speech before troops here at the Edward Andrews Air Base. “I was once upon a time a trial lawyer for almost nine years I should know my law and I should know how to protect you.”

He said he was not taking a hard stance against the ICC, but he was just speaking from the legal perspective.

“Only these guys do not know their law,” he said.

Duterte maintained he did not violate any law when he told law enforcers and the military to destroy the drug syndicates and their apparatus.

That was why, he said, his orders to the “law enforcement and to you [soldiers] is to destroy the organizations of the drug syndicates. Destroy the apparatus,” Duterte said.

Duterte said their refusal or inability to understand was the same reason he had asked them to leave.

“That’s why I told their son of a bitch chief to leave,” he said.

Duterte said the reason why the ICC appeared to be singling him out was that he had told law enforcers and soldiers “not answer questions from them and that is for a reason legal (reason).”

That was why he said if they come here, law enforcers should not talk and not entertain any questions from them.

Duterte said once they speak and respond to questions, which are freewheeling and recorded, law enforcers and soldiers would be “bound by your [statements] and anything that you said.”

“That’s why the best way is just to keep silent. Tell them you have a commander in chief,” he said.

“I already told you that I take full responsibility. Just do your job,” he said.

Duterte said he never ordered anyone to kill those who did not fight back.

“I did not say you kill those whose backs are turned on you or those who were on their knees,” he said. “What I’m saying is you destroy… there’s going to be a fight and if somebody dies, they wanted it. I already told them to stop.”

He said when the ICC investigators came, all law enforcers and soldiers should do was to welcome them and say no more.

“It’s not being superior. It is for your protection. Let me take care of it. Do not worry. If I go to jail, there’s no problem. If they ask for you statement, [you say] sorry, the Constitution does not allow it and our commander in chief says that we shut up,” he said.

Duterte said if everybody talked, “there will never be a uniformity in the answer and loopholes would be found.”

“Because we are not situated in the same situation or similarly situated at one time so the statements would [contradict] each statement. It’s gonna be convoluted…mixed,” he said.

Contradicting statements, he said, would place “us in jeopardy.”

“But if you shut up and say it’s Duterte’s order. He ordered [us] to destroy the organization,” he said. “So what’s wrong with that? Can I not protect my country by killing people and destroying the apparatus [of drug syndicates]?”

‘Do not feel invulnerable’

Duterte said the military could even bomb a drug factory.

“We’ve got excess bombs,” he said.

“I’ve said just obey my order within the legal bounds of the law and I’ll take care of everything,” he said.

Duterte also said it was normal that when one trained a gun it should be fired.

Duterte also said in jest that he would readily go to jail “if they give me five women.”

He also repeated his warning against local executives engaged in the illegal drugs trade, telling them not to be confident that they would not be touched because he would really deal with them.

“Do not feel invulnerable,” he said. “I will really hit you because you are destroying the nation.” /atm