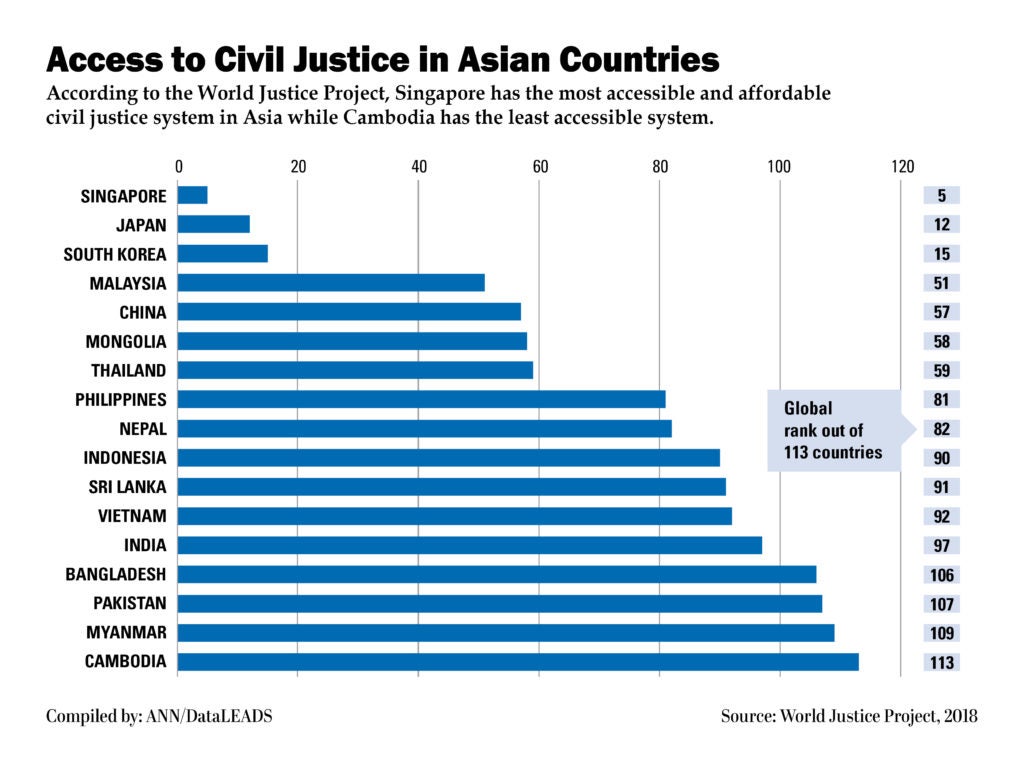 Last week, we looked at the data from World Justice Project related to rule of law from the perspective of ordinary people in different Asian countries. This week we collected data from the same report related to civil justice in Asia. Civil justice is important because it’s the law that most affects common people in terms of disputes related to property, personal injury, construction among others.

Singapore is the only Asian country to figure in the top ten list of countries that have an accessible civil justice system. It is ranked 5 out of 113 countries globally. In 2016, the country established a committee to ensure accessible justice to its diverse population. Japan ranked 12 has been working gradually towards being a rule oriented society where individuals are given more access to justice system thus ensuring social equality. It is followed by South Korea which is ranked 15.

Rest of the Asian countries are ranked below 50. Despite having various legal aid schemes for people to access the justice system Malaysia is ranked 51 which is followed by China at 57. Amidst its economic growth China has made efforts to reform its justice system which remains under communist control. Last year the country opened its archives for scholars to study legal cases and judicial administration in China. Mongolia and Thailand are ranked 58 and 59 respectively.

Phillipines’ citizens perceive a lack of access to the justice system owing to the convoluted court proceedings due to lengthy delays. People express a low trust in court and the police. The country is ranked 81 closely followed by Nepal at 82.

Indonesia has a low number of civil claims which is indicative of the low confidence of its citizens in the court. It is ranked 90 out of 113 countries, followed by Sri Lanka and Vietnam at 91 and 92 respectively.

The citizens of the other three South Asian countries India (97), Bangladesh (106) and Pakistan (107) also express little faith in the integrity of the justice systems of their countries.

Myanmar still reeling under the violence inflicted on the Muslim Rohingyas is ranked the second worst in Asia at 109.

With decades of political instability and devastating violence like Khmer Rouge, Cambodia is perceived by its citizens to have worst access to civil justice system. It is ranked at the bottom of 113 countries.