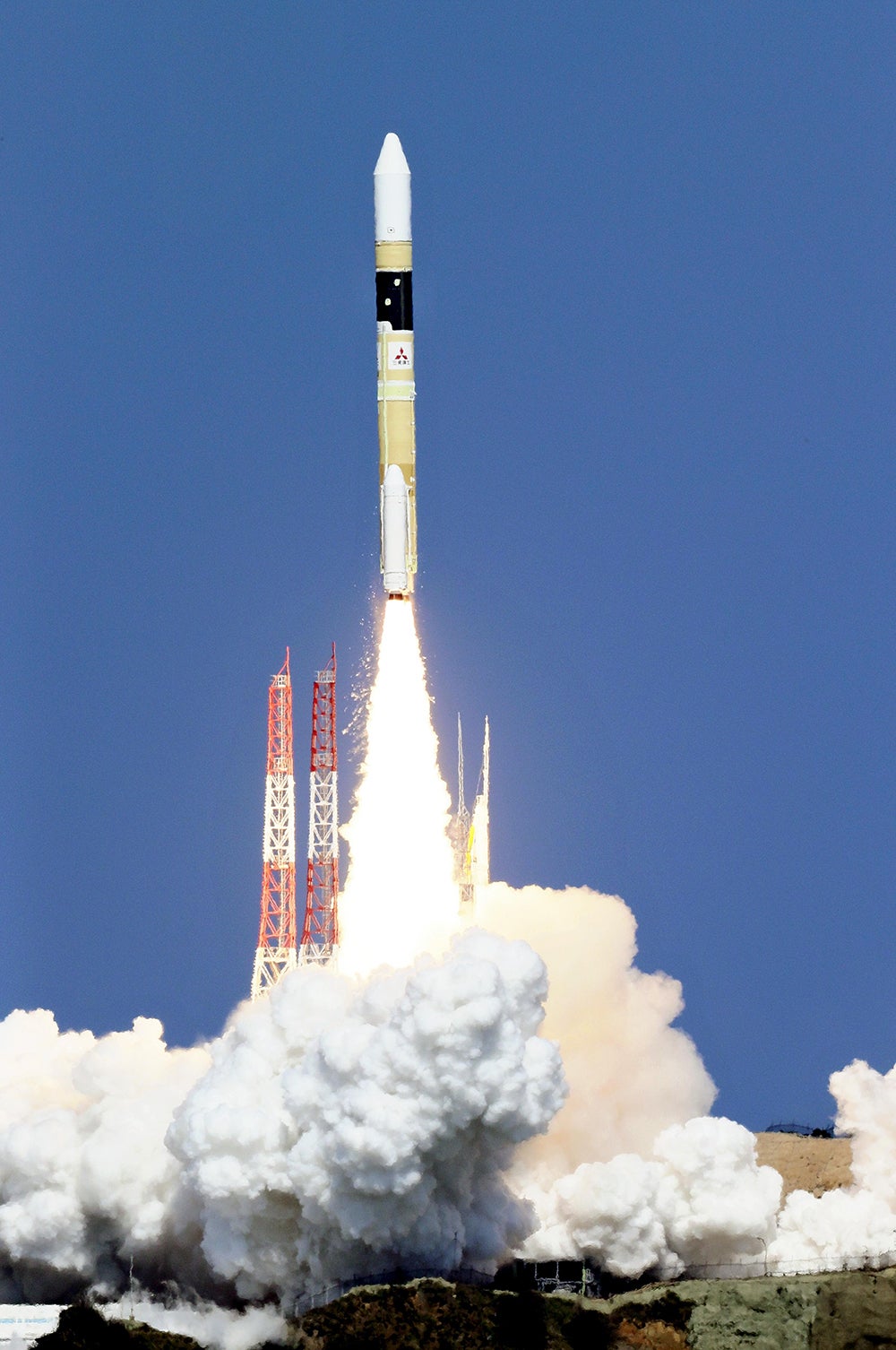 TOKYO – The Japanese government launched a rocket on Tuesday carrying an optical reconnaissance satellite that will look for signs of missile launches and other things at military and other facilities in North Korea.

The Japan government is placing increased importance on space-based monitoring systems amid the heightened threat stemming from North Korea’s nuclear and missile development.

The satellite was put into orbit as planned after the rocket — the H-2A Launch Vehicle No. 38 — blasted off from Tanegashima Space Center in Kagoshima Prefecture at 1:34 p.m.

Ultimately, the government intends to create a 10-satellite system comprising four optical and four radar satellites, and two that would transmit and receive data.

This would give the government the ability to reliably photograph any spot on Earth multiple times per day.

The domestically produced H-2A rocket is a workhorse, having had 32 consecutive successful launches, which equates to a success rate of 97.4 percent.

“I can’t disclose the details because this would reveal our capabilities,” Kenichi Kinomura, head of the Cabinet Satellite Intelligence Center, said at a press conference after the launch.

The government believes revealing specifics about the satellite’s abilities would have a major impact on national defense.

According to materials released by the government, its reconnaissance satellites orbit the Earth at altitudes ranging from several hundred to 1,000 kilometers.

Commercial satellites have resolutions of up to several dozen centimeters — enough to recognize the movements of people and vehicles. Intelligence satellites are thought to have at least that level of resolution.

The main role of the reconnaissance satellites is to monitor military and other facilities in North Korea, which is continuing with its nuclear and missile development.

According to several government sources, satellites have captured signs of impending launches before North Korean ballistic missiles were fired. The signs included missiles being transported, installed on launch platforms and fueled.

A figure thought to be Kim Jong Un, chairman of the Workers’ Party of Korea, was even observed traveling to observe a launch.

These images are defense secrets and carefully managed by the Cabinet Satellite Intelligence Center, which shares them with Prime Minister Shinzo Abe, the defense minister and relevant entities.

“The more eyes we have, the better our surveillance net is,” a senior government official said about the latest launch.

North Korea has recently taken steps to avoid satellite surveillance, such as covering its operations and using movable launch pads.

Only being able to take infrequent photographs makes it difficult to track the movements of launch pads. “We can’t call our surveillance system sufficient,” a senior Cabinet Secretariat official said.

The latest launch brings the number of Japan’s reconnaissance satellites to seven. Rather than strengthening the surveillance system, the goal is to maintain a four-satellite system that can obtain more than a single image per day.

This is because three of the seven satellites have surpassed their five-year limits and will soon cease to operate.

The government’s 2015 basic plan for space set a goal of building a 10-satellite system. That target, however, was vague, only saying “by fiscal 2025 or later.”

The government’s space-related initial budget is about ¥300 billion per year, of which about ¥60 billion goes toward reconnaissance satellites. This is much less than the U.S. National Aeronautics and Space Administration’s annual budget of about ¥2 trillion.

A reconnaissance satellite took images of the January eruption of Mt. Kusatsushirane. The government published the images, modified for reasons such as reducing their resolution, on the Cabinet Secretariat website. The government hopes to win public understanding of the satellite launches by expanding their activities beyond national security.

There are limitations to what reconnaissance satellites can achieve.

For example, detecting the exact moment North Korea launches a ballistic missile would require an early warning satellite, which use infrared sensors to detect heat from a geostationary orbit.

Japan does not have any of these satellites, and instead relies on the United States for such information.

The government has started researching sensor technology, but it is said that an early warning satellite would require at least ¥1 trillion for operations and other costs.

Hiroaki Fukue, former commander of the Air Defense Command of the Air Self-Defense Force, said, “Instead of cutting other defense budgets, the priority should be working with the United States.”

To fill the holes in its reconnaissance satellite capabilities, the Defense Ministry is working toward using images obtained from commercial satellites and technology that detects radio waves emitted by missiles.

“It’s important to have a comprehensive, integrated surveillance system that includes not only satellites, but radio waves, information from allied nations, human intelligence and other sources,” a senior Self-Defense Forces official said.