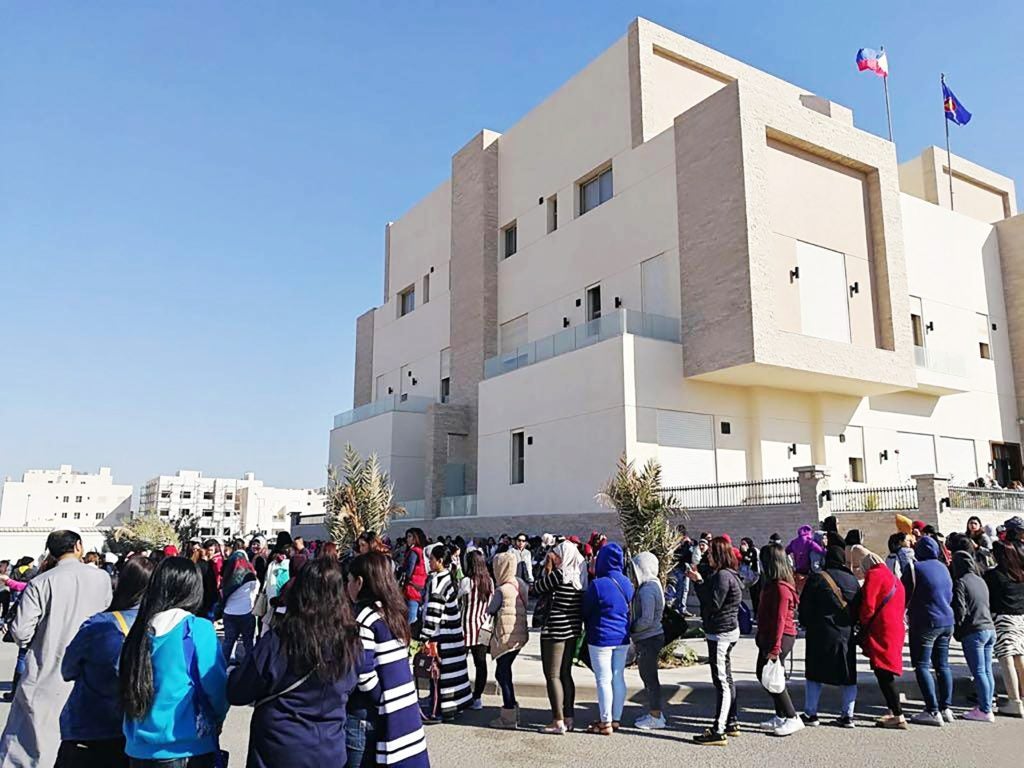 KUWAIT CITY — The murder of a Filipino maid whose body was found in a freezer in Kuwait has triggered outrage and prompted Manila to impose a departure ban for its citizens planning to work in the Gulf state.

But the estimated 252,000 Filipinos already working in Kuwait must weigh their fear of sharing the fate of Joanna Demafelis against the potential loss of vital income for their families.

Many have relatives back home who depend on remittances to survive, and some say they are forced to choose between their own well-being and that of their children.

Luzviminda has worked at a hair salon in Kuwait City since 2013 to support her five children, who live with her mother in the Philippines.

‘I need the money’

Despite being rattled by news of her compatriot’s murder, the 40-year-old told Agence France-Presse (AFP) that going home was not an option.

“I need the money,” Luzviminda said as she strolled through a park in the city.

“My eldest son started university this year to study business administration. It’s expensive, and there’s no way I would have been able to afford it if I had stayed in my country,” she said.

Demafelis’ body was discovered at an abandoned flat in Kuwait, bearing what officials said appeared to be signs of torture.

Her Lebanese employer, Nader Essam Assaf, and his Syrian wife, Mona, who are suspected of the murder, were arrested last week in the Syrian capital Damascus, after an Interpol manhunt.

The Philippines’ President Duterte responded to the murder by accusing Arab employers of raping and starving their Filipino maids, and announced a ban on the country’s citizens heading to Kuwait for work.

Mr. Duterte also launched a repatriation plan under which some 1,700 workers have already returned home, according to the Philippine government.

Kuwait, whose image was dealt a serious blow, offered an amnesty to illegal workers wanting to fly back home.

But Human Rights Watch has warned the new Philippine ban would likely trigger a wave of unregulated labor migration, exposing thousands to an even greater risk of abuse.

Valued for their fluency in English, more than 2 million Filipinos are employed across the Gulf.

While the murder rocked the Filipino community in Kuwait, many say they want to remain in the country.

“I was truly afraid—but actually because I want to stay here to make sure my children graduate from school,” said Luzviminda, who asked that her family name be withheld.

“But if the government asks me to leave, I will have no choice but to comply,” she added.

Like many others, her fate and that of her children now lie in the hands of diplomats, as the crisis between the two countries deepens.

Some plan to lobby the Philippines’ Overseas Workers Welfare Administration to lift Mr. Duterte’s ban, at least for skilled workers whose status in Kuwait is not tied to a single family under the “kafala” (sponsorship) system prevalent in the Middle East.

“There are a lot of opportunities for the Filipinos” in Kuwait, said Anna Bunda, who works with a recruitment agency.

“I hope that the government will hear us,” Bunda said.

Gulf countries have long drawn harsh criticism for their treatment of laborers and maids.

“While we have a deal with a legal bureau [that] represents workers and maids in court, the unfortunate reality is that many calls for help do not even reach us,” he said.

The head of Kuwait’s parliamentary human rights committee, Adil Damkhi, said the judiciary did not discriminate when it came to crimes in Kuwait.

He called the Demafelis murder “a heinous crime.”

“The suspects have been arrested and will be tried, just as any Kuwaiti attacking workers will be punished,” he said.

And while rights groups have criticized Gulf countries for failing to protect migrants, 56-year-old Rose, a housekeeper in Kuwait since 1997, said the benefits outweighed the risks.

“I worked for five families, the last of which was an American family. They treat me well,” she told AFP. “I cook what I want, and I exercise every morning on my own — and I help my family back home to cope with the burdens of life.”