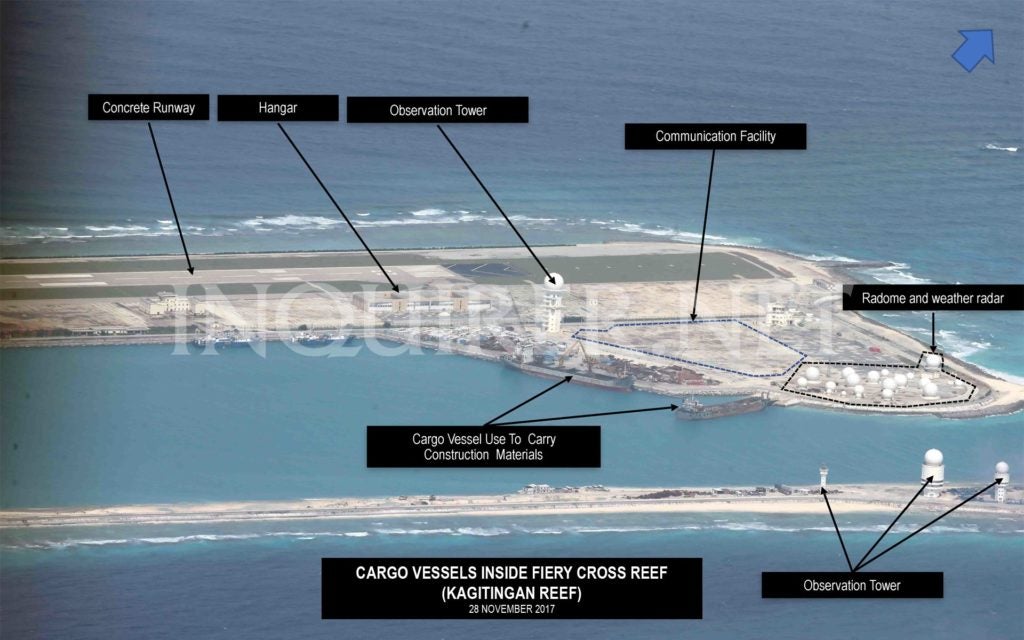 The Kagitingan Reef (Fiery Cross Reef), the smallest of the “Big 3” artificial islands of China in the Spratlys, is likely the “intelligence/communications hub” of the regional superpower on its man-made islands, a US-based think tank said.

A large communications/sensor array was completed on Kagitingan Reef in 2017, according to the Center for Strategic and International Studies of the Asia Maritime Transparency Initiative (AMTI).

On Friday, the AMTI released its analysis comparing their satellite photos with the aerial photos released by the Inquirer early this month.

“None of the other bases in the Spratlys so far has a comparable array, though smaller ones have been built on Subi and Mischief, suggesting that Fiery Cross might be serving as a signals intelligence/communications hub for Chinese forces in the area,” the AMTI said.

Kagitingan had the most construction among China’s seven artificial islands in the Spratlys, with work spanning 100,000 meters, according to the research organization.

“Why are we not protesting China’s militarization of [Kagitingan] Reef? It is outside our exclusive economic zone (EEZ) but too close for comfort,” said former National Security Adviser Roilo Golez in a Facebook post Saturday.

“Combat planes to be deployed there can reach Palawan and parts of Mindanao within minutes. Like [Panganiban] Reef, it is also a threat to our national security. This is not a good faith act, but a hostile act,” he also said.

Further, the AMTI observed that the underground storage tunnels likely for ammunition and other materiel in Panganiban Reef have been already buried, based on the Inquirer photos.