OFW’s toil in Kuwait for family ends in wooden box 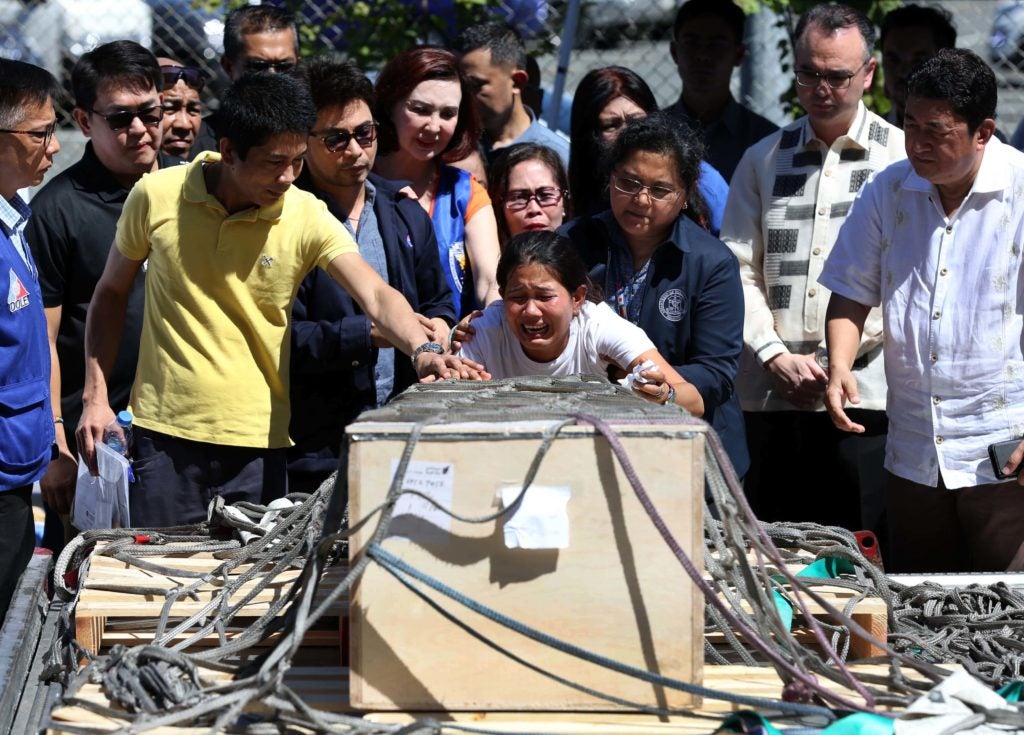 GRIM REUNION As government officials look on, Jessica Demafelis weeps while hugging the sealed casket of her sister, Joanna, whose remains were flown in from Kuwait on Friday morning. Joanna, who was reported missing for a year, was found inside a freezer in an apartment abandoned by her employers. —LYN RILLON

Joanna Demafelis left for Kuwait four years ago to seek a better life for her family in Iloilo. On Friday morning, she came home to the wails of her siblings as her wooden casket was unloaded from a Gulf Air flight.

It was an emotional reunion for Demafelis’ siblings Jessica and Jojit, who learned only last week that their sister—reported missing for a year—had been found dead inside a freezer in an abandoned apartment unit in Kuwait City.

Demafelis’ body bore signs of abuse—broken ribs, bruises, and contusions—that Kuwaiti forensics said  that the maltreatment didn’t happen once, but had continued over a period of time.

Kuwaiti authorities said they had alerted the Interpol to look for Demafelis’ employers, Lebanese Nader Assaf and his Syrian wife, who left the apartment shortly after reporting that their Filipina help had absconded.

Foreign Secretary Alan Peter Cayetano, who led the contingent of government officials who met the Demafelis siblings at the airport, assured the family that their counterparts in Kuwait were “exerting all efforts” to locate the suspects.

Demafelis’ case would serve as a “rallying point for all government agencies to be more aggressive in [protecting] our overseas Filipino workers (OFW),” the Department of Foreign Affairs (DFA) official added.

Cayetano said they would launch in the coming months an international hotline system to help government officials communicate better with the more than 10 million OFWs all over the world, and respond more effectively to reports of abuses.

Demafelis’ remains were expected to arrive in Iloilo at 5:30 this morning via a Philippine Airlines flight.

Her parents, Crisanto and Eva Demafelis, said they would be up early today to fetch the daughter they had not seen for four years.

Demafelis, 29, came from the farming village of Ferraris in Sara town, Iloilo, where her parents planted corn and palay in a small plot of land.  She left for Kuwait in May 2014, to work as a domestic help so she could provide for the family and send their youngest sibling to school.

In 2016, Demafelis extended her contract because “she wanted to save money to have our house repaired,” said her father. “But this will never happen now,” he added. 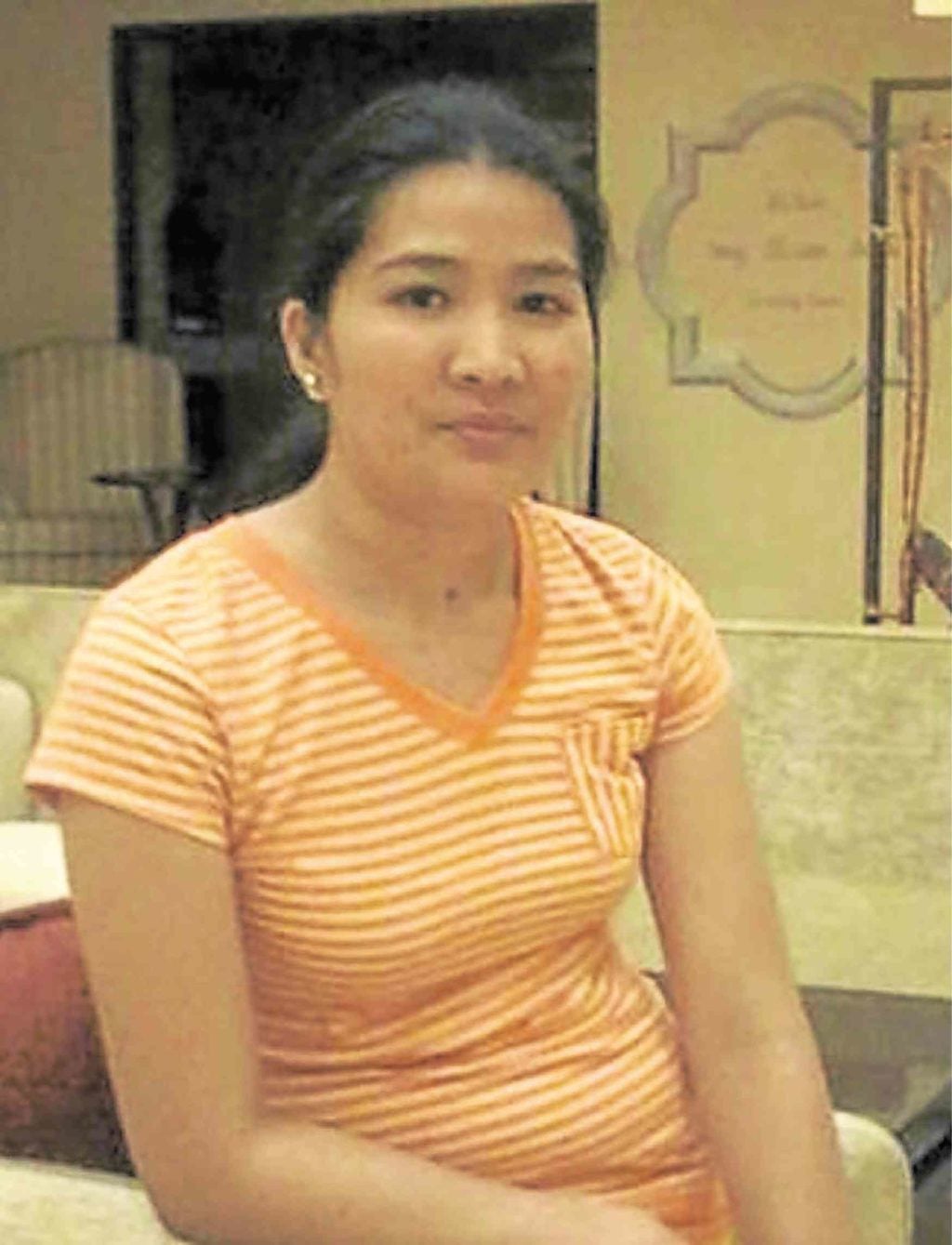 Joanna regularly sent money and communicated with them, until her calls became less frequent. Her last call came in February 2017.  By then, she had also stopped sending money, forcing her brother Joyce to quit school at the Northern Iloilo Polytechnic in Estancia town, Iloilo, where he was taking criminology.

Eva said a cousin went to the Overseas Workers Welfare Administration (Owwa) office in Manila to seek its help in locating her daughter, but was told that there was nothing they could do since Joanna’s recruitment agency had long closed down.

On Feb. 7 this year, an Owwa staff from Iloilo informed them of the body found in the freezer.

Eva said they just wanted to bring Joanna home and give her a decent wake to honor the sacrifices she had endured for the family. They have yet to set a date for Demafelis’ interment.

The Owwa on Friday turned over P500,000 to the family in financial and livelihood assistance. A P50,000 educational grant was also given to Demafelis’ youngest sister.

Demafelis’ death triggered a diplomatic row between Kuwait and the Philippines, which announced a “total ban” on new deployment of OFWs to the oil-rich country, and flew home hundreds of others, a move condemned in the Middle East.

Read Next
US carrier entitled to freedom of navigation, says Palace
EDITORS' PICK
Quarantine violations still punishable despite deleted provisions in ‘Bayanihan 2’ – Bato dela Rosa
‘Puno na lahat:’ Metro workers brave lack of public transport, rains on Day 1 of GCQ
Leveling up your ‘lutong bahay’ with the kitchen companion you never knew you needed
Someone from the Philippines can become $356 Million richer this Tuesday
BFP raises general alarm over Mandaluyong fire
Cherry Mobile teams up with Cloud Panda PH, launches online store
MOST READ
‘If I had not been SolGen, I will make you eat your words,’ Calida tells Coco Martin
Quarantine passes no longer required under GCQ, but curfew remains
5 car dealership outlets shutting down
BFP raises general alarm over Mandaluyong fire
Don't miss out on the latest news and information.