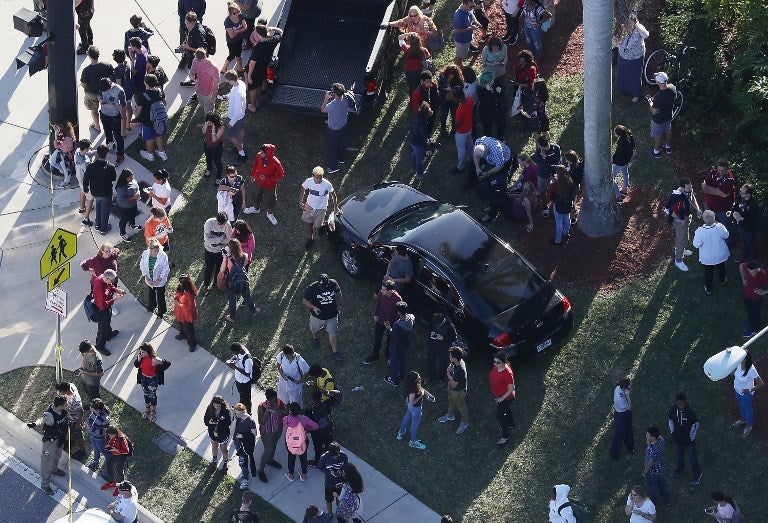 People wait for loved ones as they are brought out of the Marjory Stoneman Douglas High School after a shooting at the school that reportedly killed 17 people and injured dozens of others on Feb. 14, 2018 in Parkland, Florida. Numerous law enforcement officials continue to investigate the scene. AFP

No Filipino was reported among those killed or wounded in the deadly shooting at a high school in Florida, United States where 17 students were killed, the Department of Foreign Affairs (DFA) said on Thursday.

The DFA said the Philippine Embassy in Washington, D.C. has not received any report of any Filipino being among the casualties in the shooting at the Marjory Stoneman Douglas High School.

“We are deeply saddened over the loss of so many young lives in this shooting incident in Parkland, Florida,” DFA Secretary Alan Peter Cayetano said in a statement. “Our hearts reach out to the families of those who lost their lives in this horrible tragedy.”

READ: ‘Numerous fatalities’ in US school shooting, suspect in custody

In a report by CNN, a former student armed with an AR-15 high-powered assault rifle barged into the school and opened fire on teachers and students on Wednesday

The suspect, identified as 19-year old Nikolas Cruz, killed at least 17 and injured an unconfirmed number of persons, according to the report.

Philippine Ambassador to the US Jose Manuel Romualdez said the incident was now considered to be “one of the worst school mass shooting incidents in US history.”

“We join our kababayans in Parkland, Florida and the rest of Florida and the United States in prayers for the victims of this tragic incident,” Romualdez said in a statement provided by the DFA. /cbb