Duterte: This isn’t the time to fight China 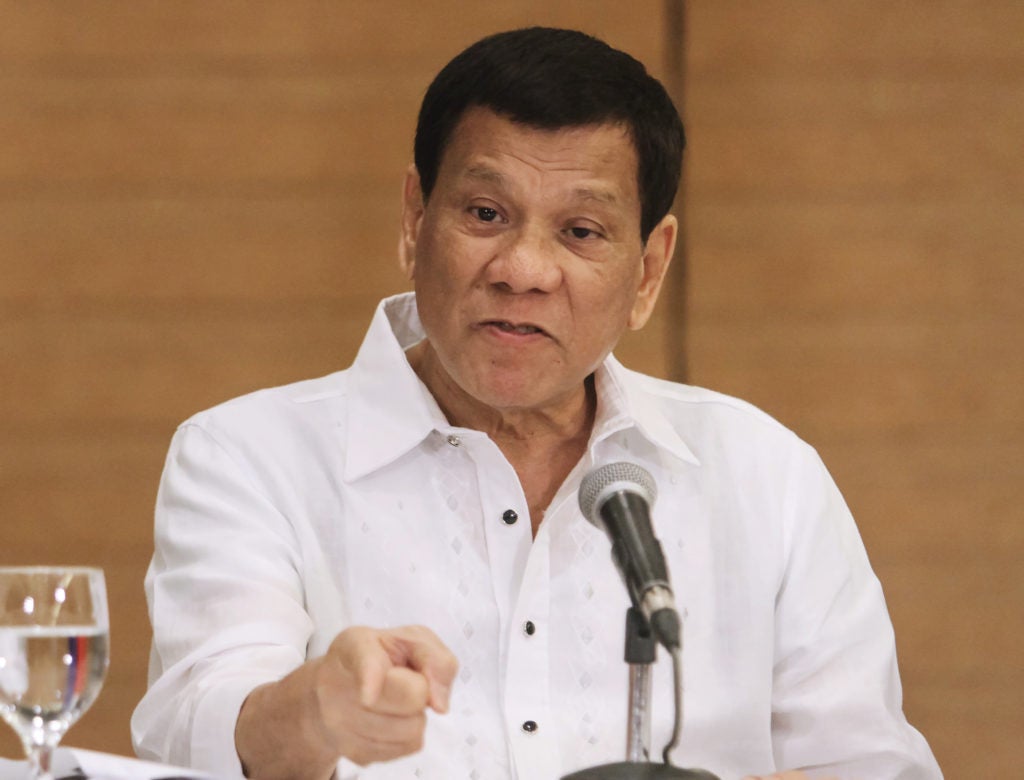 Philippine President Rodrigo Duterte gestures as he speaks during a press conference in Davao City, in the southern island of Mindanao on February 9, 2018. AFP

DAVAO CITY — President Rodrigo Duterte on Friday hinted that his administration would not be questioning China over its activities in the West Philippine Sea, including its aggressive construction of military facilities on several reefs it had seized from the Philippines.

Speaking to reporters here, Mr. Duterte said any move the country took in protest against China’s actions at this point might be viewed negatively by its giant neighbor.

“This is not the time to be fighting over the South China Sea because it will only lead to war,” the President said, apparently referring to the West Philippine Sea, part of the disputed waterway that is within the country’s 370-kilometer exclusive economic zone.

China has built multistory structures, military-grade piers and runways, as well as aircraft hangars, and placed antiaircraft weapons on three of the seven reefs it had seized from the Philippines since 2002.

Opposition lawmakers and other critics have decried the Duterte administration’s “defeatist” stand on China’s activities, saying it could have at least filed diplomatic protests to assert the country’s sovereignty over the disputed waters.

Supreme Court Senior Associate Justice Antonio Carpio, a member of the legal team that successfully argued the Philippine case against China’s claim to almost 90 percent of the entire South China Sea in the international arbitral court in The Hague, said Beijing needed to be stopped, short of engaging it in a military confrontation.

“The biggest (security) problem is China. If we lose (our maritime space in the West Philippine Sea), we lose it forever,” he told Inquirer.net’s Frances Mangosing.

The militant group Bayan Muna, which is organizing a protest action in front of the Chinese Embassy in Makati this week, has also denounced the government for its “inaction” while Beijing is “robbing” the country of territory.

Bayan Muna particularly lambasted presidential spokesperson Harry Roque, who said last Wednesday that “there will come a time when China’s might had ceased, when we will have to thank them for the islands …”

Those Chinese-built artificial islands, Roque added, “will be ours if we can ask China to leave.”

Said the leftist group in a statement on Friday: “We were robbed (by China), but we’re still thankful.”

Carpio said that China would never return territory it grabbed. “We cannot go to the (International Court of Justice) because China has to agree and China will never agree to submit to arbitration,” he added.

On Friday, Mr. Duterte justified the view of his spokesperson, saying the Philippines could put to use the structures on the Philippine-claimed islands when the time came that Manila was ready to assert its rights over the territories.

“We’ll even have a hotel there,” he told reporters in jest.

What is happening in the South China Sea is part of the “race between two superpowers,” the President said, referring to Asian economic and military giant China and the United States, which has challenged Beijing’s sweeping claims over the waterway by conducting freedom of navigation naval and air patrols.

The President said the Philippines should not worry about China and join in bashing its giant neighbor for its actions because these were actually “part of its geopolitics” and it was “playing it right.”

But while his administration would remain neutral in the struggle between the United States and China in the South China Sea, Mr. Duterte said he “will continue to talk with China.”

He also said China had no intention of claiming Philippine (Benham) Rise because it recognized Manila’s sovereign rights over the vast underwater plateau east of Isabela and Aurora provinces.

“Benham Rise is ours,” he said.