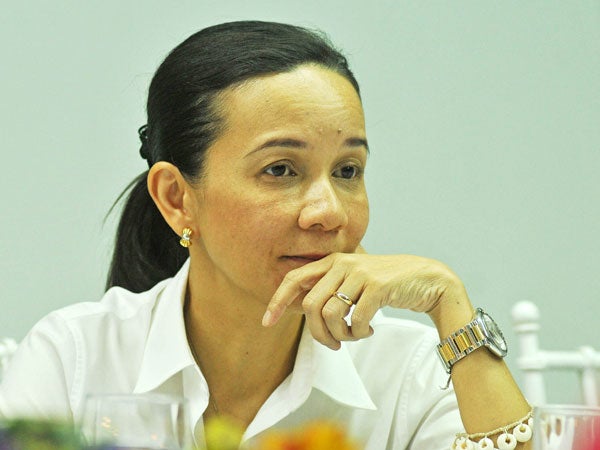 Senator Grace Poe branded on Thursday as “wishful thinking” a Palace official’s remark that China would eventually return the islands being claimed by the Philippines in the disputed South China Sea.

Poe was reacting to presidential spokesperson Harry Roque’s earlier statement that the Philippines will “thank” China one day for the artificial islands it has built in the South China Sea.

“The West Philippine Sea will freeze over first before China will even begin toying with the idea of giving us back those islands,” Poe said in text message.

“Thus, Secretary Roque’s wishful thinking is like saying that a homeowner may soon be thankful to a gang of fully armed men who unlawfully intruded his place for some time and made it their safe house, which in effect prevented other criminals from ransacking the same.”

“And this comes with false hopes that the gang members will decide to give the house back, if they have not yet transferred the title under their name,” Poe added.

“There will come a time when China‘s might had ceased, when we will have to thank them for the islands because it is only the Philippines that can legally build on those artificial islands,” Roque said.

“Clearly, eventually, those artificial islands will be ours if we can ask China to leave the islands,” the spokesman added.

In July 2016, the Permanent Court of Arbitration in The Hague decided that the Philippines has exclusive sovereign rights over the West Philippine Sea (in the South China Sea) and that China’s “nine-dash line” was invalid.

But real photos obtained by INQUIRER supposedly taken from June to December 2017 showed that China has almost finished transforming seven reefs claimed by the Philippines into island fortresses. /jpv