PH to back US fight against terror if interests coincide 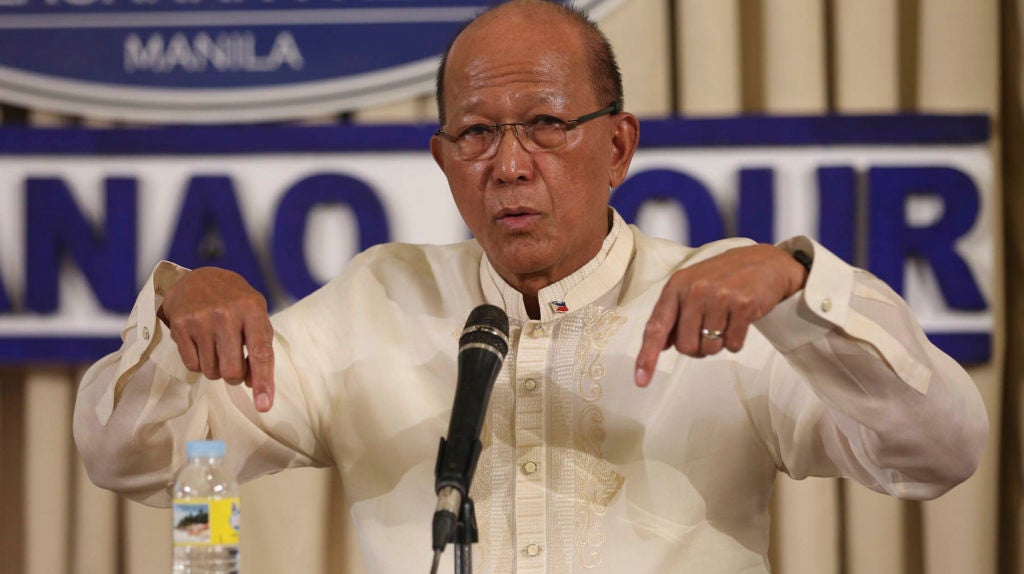 Defense Secretary Delfin Lorenzana on Wednesday said the Philippines would support the United States’ fight against terrorism – but only when the efforts of the two allies would coincide.

Lorenzana reacted guardedly to US President Donald Trump’s remarks on fighting terrorism in his first State of the Union address, even as President Rodrigo Duterte strengthened the military’s presence in Marawi City, which is rebuilding after its liberation from a five-month siege by terrorists.

Lorenzana said it did not matter that Trump failed to mention US policy on the territorial disputes in the South China Sea, saying “that’s his call.”

“If our efforts against terrorists coincide, well and good, we cooperate,” he said. “But in reality, each country will be addressing its own security problems by any legal means at its disposal.”

Mr. Duterte visited the war-torn city on Tuesday to inspect newly constructed temporary shelters for displaced residents and lead the groundbreaking for a new military camp in the Islamic City.

A Malacañang statement said Mr. Duterte called on Marawi residents to shun terrorism and embrace progress, as the city prepared to rebuild.

“Let us try to avoid terrorism. It is not the correct way to obey Islam,” the President said in a speech at a resettlement site in Barangay Sagonsongan.

Islam does not kill and destroy for no reason at all, he said, as he called on residents to turn away those who would try to sow terror in their city.

“We should not let them (terrorists) in. I beg of you not to allow them to enter because it will just cause massive destruction and the loss of lives, including the innocent ones who are really the helpless in case of war,” he said.

The residents should turn their focus on making Marawi a thriving city once more, he said, adding that they should welcome Christians as well.

“I’m appealing to you to maybe redirect your paradigm or mind-set and allow progress to take place. You will need the Christians as the Christians need the Muslim population,” he said.

Mr. Duterte also sought forgiveness for the city’s destruction, saying he did not wish for it.

“But, you know, there were some events that occurred that I, as President of this Republic, had to respond (to), otherwise I have been a derelict of duty and, of course, might have been ousted,” he said.

He promised assistance for Marawi’s needs, including new homes and livelihood programs for the residents.

“We (will) try to build a new city. I will guarantee you for the remaining years that there will always be money for you, that you’ll be able to rehabilitate your business if you really want to,” the President said.

The government is drafting the master plan for a new Marawi City.

The new military camp will include the new city hall. The compound is expected to be more defensible in case of terrorist attacks in the future, Army officials said. —Reports from AP, Leila B. Salaverria, Jigger Jerusalem, Divina Suson and Richel Umel