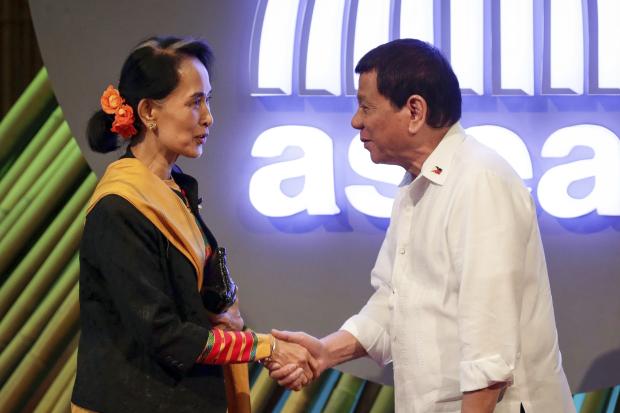 “Do not mind the human rights. They’re just a noisy bunch actually,” he recalled telling her in a recent meeting.

Duterte, however, did not clarify whether this conversation took place during the India-Asean Commemorative Summit here, which concluded on Friday, or in their previous meetings, including in Manila, which hosted last year’s Asean meetings.

“You know, Aung San Suu Kyi was with us. I pity her because she seems to be caught in the middle being a Nobel Prize winner for peace and this is the ruckus now she is heavily criticized,” the Philippine leader said in a speech before Indian business leaders and investors.

“You know, [she] has been complaining that—this is—we are talking about our country, the interest of our country. Our own country. And I said, ‘Do not mind the human rights. They’re just a noisy bunch actually,’” Mr. Duterte said.

Suu Kyi, a Nobel Peace Prize laureate, has been criticized for her silence and alleged complicity in the atrocities committed by Myanmar’s military brass against ethnic Rohingya Muslims in Rakhine State, including rape, arson and murder.

The meeting with business leaders was Duterte’s last stop in his three-day trip to India, his first foreign travel of 2018. He flew back to the Philippines at 2:12 p.m. India time.

The President delivered another of his rambling speeches, in which he talked about, among other things, his war on drugs, his disdain for human rights groups, American imperialism, and how Indian business were welcome in his country.

“Imperialism never stopped,” he said after his mention of Aung San Suu Kyi.

“It started in my country 500 years ago. And the Spaniards stayed in my country for 400 years. That’s why what you see now, the fragmentation of the islands from —is just the same in the Middle East,” Duterte said.

“And until now, America… [keeps] acting like the conscience of the people and trying to police everybody. That’s a problem. You impose your values, you are very strong and at that United Nations has no purpose at all actually for mankind,” he said.

“Now, we have a guy there also playing with his atomic toys,” he said in an apparent allusion to US President Donald Trump.

But Duterte did not get to finish his train of thought as he was interrupted by a protocol officer who reminded him he was supposed to catch his return flight.

“The Philippine Airlines plane can go ahead. I’ll just take the commercial flight via Hong Kong,” he joked. He proceeded to speak for a few more minutes, but did not return to the topic of the US. /jpv