Volcanoes, earthquakes: Is the ‘Ring of Fire’ alight? 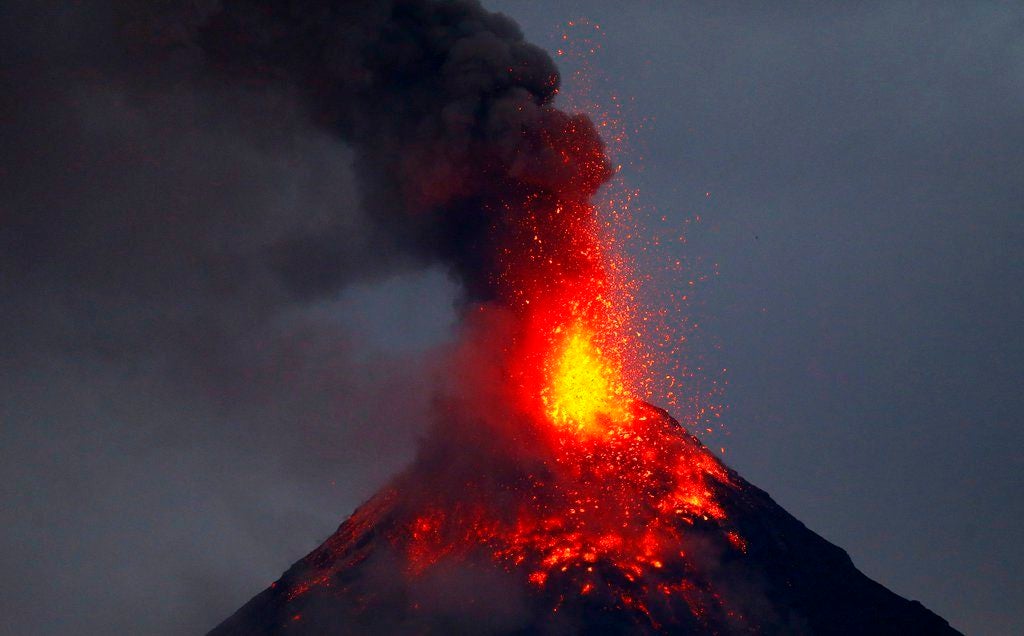 Mt. Mayon spews red-hot lava in another eruption as seen from Legazpi City, Albay province, roughly 340 kilometers southeast of Manila, on Tuesday, January 23, 2018. The Mayon volcano has spewed fountains of red-hot lava and massive ash plumes anew in a dazzling but increasingly dangerous eruption that has sent thousands of villagers fleeing to evacuation centers. (Photo by BULLIT MARQUEZ / AP)

A volcanic eruption in the Philippines forces mass evacuations, while another in Japan kills one person. Across the Pacific, a 7.9 magnitude earthquake hits off Alaska. So what’s the link?

The spate of activity around the so-called Ring of Fire has raised concerns that a major and potentially deadly volcanic eruption or earthquake could be on the way. Here is what the experts say:

Where are these events happening?

The recent volcanic eruptions and earthquakes occurred along a belt that runs around the Pacific Ocean and is known as the “Ring of Fire.”

Reaching from Indonesia to the coast of Chile in a 40,000-kilometer (25,000 mile) arc, the belt is home to most of the world’s active and dormant volcanos, and is where the vast majority of earthquakes occur.

It is an interconnected circle of fault lines – cracks in the Earth’s hardened upper crust – which are under constant pressure from super-hot molten rock beneath.

Occasionally the fissures give in and explode, creating volcanic eruptions and causing the land on either side of the fault line to shift and buckle violently, triggering earthquakes.

Why are they happening now?

Earthquakes occur around the Ring of Fire on a daily basis, but the recent string of quakes and eruptions sparked talk of an uptick, with the United Nation’s Office for Disaster Risk Reduction tweeting that the Ring of Fire was “active”.

“The Pacific rim is in a period of activity,” acknowledged Toshiyasu Nagao, head of Tokai University’s Earthquake Prediction Research Centre.

“In terms of volcanic history, however, the current activity is still regarded as normal,” he told AFP.

“It’s not referred to as the ‘ring of fire’ because it sits there doing nothing… it is normal to have so much activity,” tweeted volcanologist Janine Krippner.

Are these events linked?

The recent spectacular eruptions and earthquakes have caused some speculation about a potential “domino effect,” but experts said that simply is not how the Ring of Fire works.

“Volcanic activity at each volcano is not correlated,” said Yosuki Aoki, assistant professor of physical volcanology at the University of Tokyo.

He said volcanos “cycle through active and inactive periods, and this is part of it.”

“I don’t think something abnormal is taking place,” he added.

“This is pretty normal activity for Earth, the media is just reporting on more of them right now,” Krippner added on her Twitter account.

Will there be more?

The Ring of Fire has produced the world’s strongest recorded earthquake and volcanic eruption, but experts said the recent activity does not necessarily presage a major natural disaster.

“We cannot predict earthquakes and volcanic eruptions. Earth science has not developed that far,” said Shinji Toda, professor at the International Research Institute of Disaster Science at Tohoku University.

“Such predictions are often made routinely after major events. If you say that everyday for a long time, naturally you will get it right at some point,” he also noted.

Nagao said the volcanic activity seen in Japan could continue, but that the region was experiencing a relatively quiet period for earthquakes.

“In terms of earthquakes, the region is not that active now,” Nagao said.