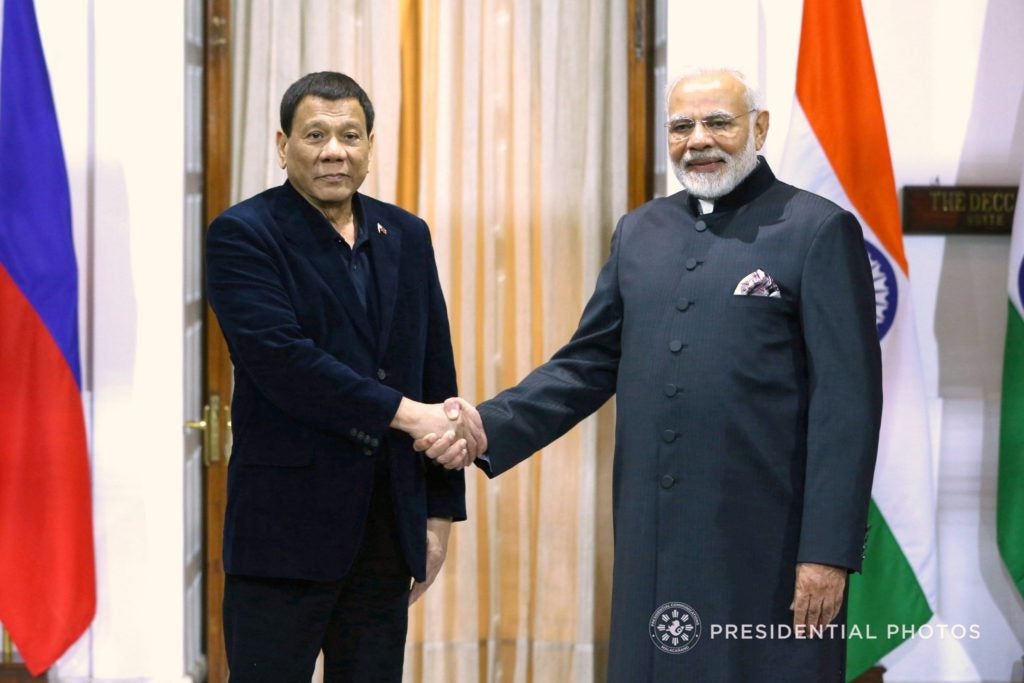 President Rodrigo Roa Duterte poses for a photo with India Prime Minister Narendra Modi prior to the start of the bilateral meeting at the Hyderabad House in New Delhi, India on January 24, 2018. KARL NORMAN ALONZO/PRESIDENTIAL PHOTO

Upon arriving here for the India-Asean Commemorative Summit, the Philippine leader sat down with Modi for an hour to discuss economic and political ties between their countries and even the possibility of a military cooperation.

“There was a commitment, in fact, for the Philippines to purchase Indian military hardware,” presidential spokesperson Harry Roque told a press briefing here.

Asked afterward to elaborate, he said the issue came up when Modi broached his country’s capability in producing military weapons.

“The Prime Minister said they have expertise in ships and other military hardware, so President Duterte manifested that in the same way he has decided to purchase weapons from China and Russia, he will also consider purchasing Indian weapons,” Roque said.

The Malacañang official said Mr. Duterte also thanked India for its support in the rehabilitation of Marawi City, particularly a cash donation of $500,000 for the rebuilding effort.

The two leaders, at Mr. Duterte’s prompting, also talked of a possible military relationship between India and the Association of Southeast Asian Nations (Asean) to combat terrorism and piracy in the high seas, according to Roque.

“Now, aside from the political and the business, the Philippine President emphasized that Asean in addition to being an economic body must also cooperate even militarily in combating the threat of modern-day terrorism,” he said.

Mr. Duterte stressed to Modi that he did not only mean terrorism by religious extremists but also the piracy threat along the Indo-Pacific navigation route straddling several Asean economies.

“Of course, the two heads of state agreed that relations while already very good will even be better and that there will be further bilateral negotiations on issues involving trade and even military cooperation in the next two months,” Roque said. /je