Duterte arrives in India, set to meet with PM Modi 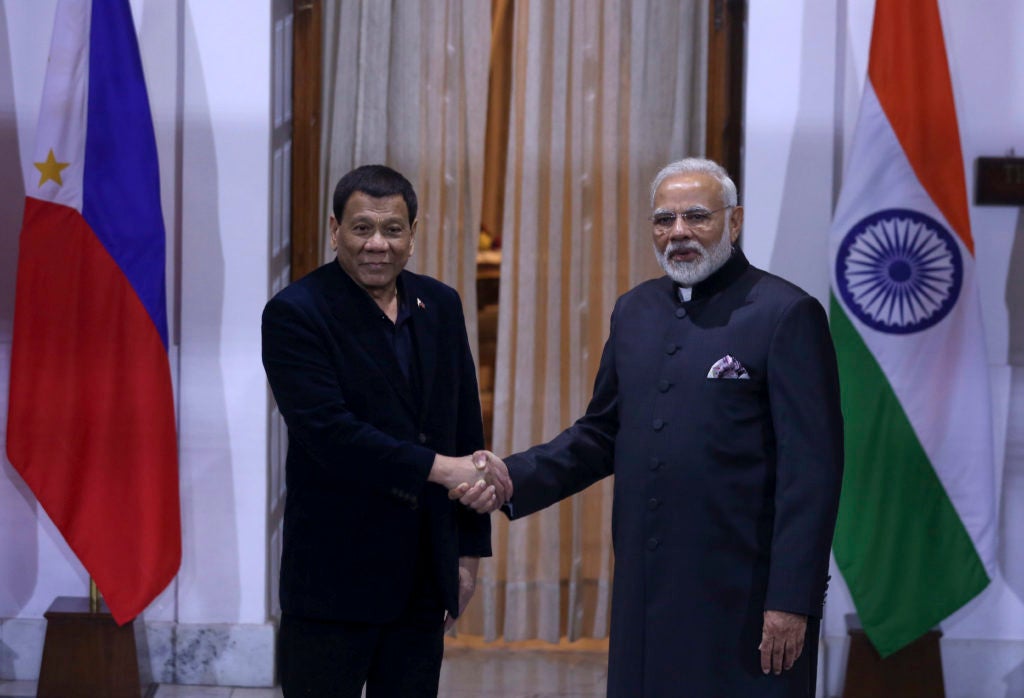 Philippine President Rodrigo Duterte, left and Indian Prime Minister Narendra Modi pose for the media ahead of their meeting in New Delhi, India, Wednesday, Jan.24, 2018. The leaders of the Association of Southeast Asian Nations, or ASEAN, are gathering in New Delhi to celebrate 25 years of the group’s ties with India. (AP Photo)

NEW DELHI— President Duterte landed here on Wednesday to take part in a regional summit with leaders of India and the Association of Southeast Asian Nations (Asean) and to begin exploratory talks for the purchase of cheap medicines in the subcontinent.

Mr. Duterte was to have a bilateral meeting with Indian Prime Minister Narendra Modi shortly after arriving here, and the former might broach the possibility of a trade deal with the Indian pharmaceutical industry.

At the end of the two-session summit, the Asean and Indian leaders are expected to sign the “Delhi Declaration” featuring a roadmap for cooperation between Asean and India, which are celebrating 25 years of relations in 2018.

Mr. Duterte and the nine other Asean heads of state have been invited to grace India’s Republic Day celebration on Jan. 26, which will be highlighted by a “spectacular parade,” according to Assistant Secretary Hellen de la Vega, head of Asean affairs in the Department of Foreign Affairs.

Modi personally invited Mr. Duterte to visit India when they met in Manila during the Asean summit in November.

It was at that meeting when the Philippine leader told Modi that he would welcome Indian investments that could give Filipinos better access to cheap medicines.

The India-Asean Commemorative Summit, scheduled for Jan. 25, will focus on maritime cooperation and on regional and international issues.

Mr. Duterte is expected to attend a lunch with Asean leaders to be hosted by President Ram Nath Kovind.

This is the President’s first trip abroad in 2018 after castigating and firing two officials for making too many foreign travels.

He initially wanted to beg off from the event but was persuaded to attend, as his absence would leave the Philippines the only Asean country without a representative at the event.

India, a fast-rising economy with 1.3 billion people, is one of Asean’s top trading partners. In 2016, total trade volume between the regional bloc and India amounted to $58.45 billion.

In 2017, India was one of Asean’s top five partners in development assistance with funded projects and programs amounting to $55.5 million.

Asean and India established dialogue relations in 1992 and India became a full dialogue partner of ASEAN in 1995. /atm