'We don’t have a title on Benham Rise,' says Roque | Global News

‘We don’t have a title on Benham Rise,’ says Roque 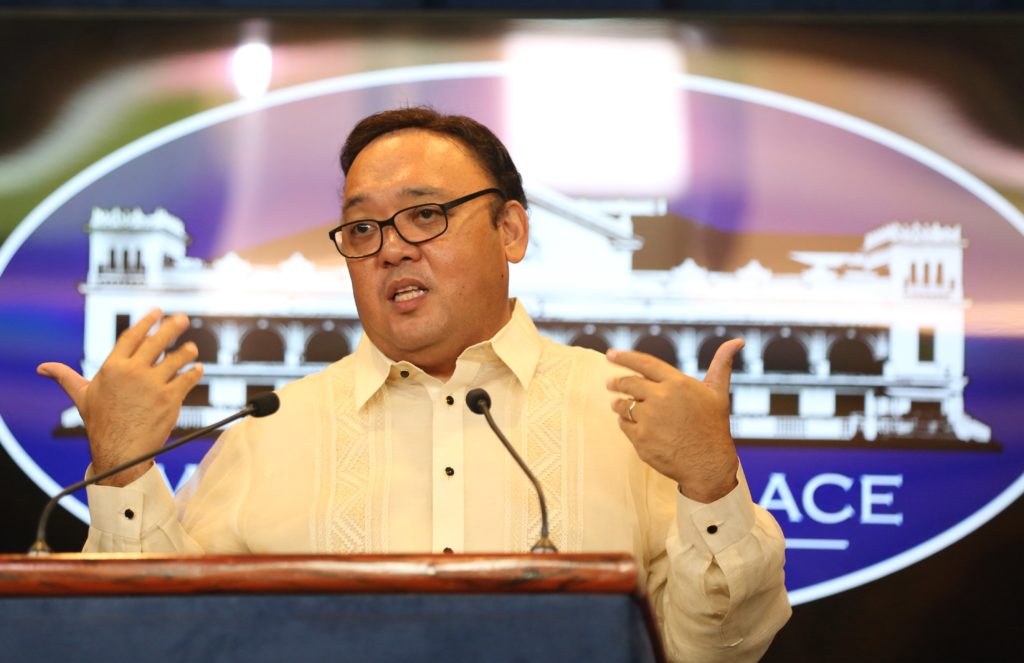 Malacañang on Monday said it agreed with China that Philippine Rise, a 13-million-hectare underwater plateau off eastern Philippines, was not part of Philippine territory.

Presidential spokesperson Harry Roque also said China could make territorial claims over Panatag Shoal but as long as it did not build new artificial islands in the South China Sea, it was not violating its “good faith” commitment to the Philippines.

Beijing has asked Manila for permission to conduct a scientific exploration of Philippine Rise, which used to be known as Benham Rise.

Roque told a press briefing on Monday that Manila was not intent on filing a protest against Beijing’s latest declaration of sovereignty over Panatag Shoal, as it had allowed Filipinos to fish in the area.

“The interest of the Philippines now is the right of our fishermen to continue with their livelihood of fishing there and that is happening now,” Roque said.

“So we continue to make a stand that Scarborough is a territory of the Philippines, but let us set aside in the meantime the issue of who has the title over Scarborough so that our countrymen can have their livelihood,” he said, using the international name of Panatag Shoal.

China was angered last week when the US-guided missile destroyer USS Hopper sailed within 22 km of the shoal, which Beijing seized after a two-month maritime standoff with the Philippines in 2012.

Beijing protested the warships’ passage near the shoal, saying it would take “necessary measures” to protect its sovereignty.

“What can we do to them? Let them claim and claim, but all the evidence proving our sovereignty is very clear to us,” Roque said.

No basis for China claim

“Allow them to make a claim,” he said. “Their basis is historic waters but we have a decision of the International Law of the Sea tribunal … which stressed that there’s no basis for historical waters under the Unclos (United Nations Convention on the Law of the Sea).”

After China seized Scarborough Shoal in 2012, Manila took its territorial dispute with Beijing to the UN-backed Permanent Court of Arbitration in 2013, challenging China’s claim to almost all of the 3.5-million-square-kilometer South China Sea.

In July 2016, the tribunal ruled in favor of the Philippines, declaring China’s sweeping claim invalid and saying it violated the Philippines’ sovereign right to fish and explore for resources in the West Philippine Sea.

“We maintain we have title, despite China’s contrary statements,” Roque said. “But for now, what’s important is the right of the livelihood of our fishermen and right now our fishermen are able to exercise their right.”

Roque said Beijing had not yet reneged on its “good faith commitment” not to build new artificial islands in the South China Sea.

“That still holds. That is the goodwill obligation that we expect compliance on the part of China—that they will not reclaim or create new artificial islands,” he said.

“That’s correct. We don’t have a title on Benham Rise because what we have is sovereign rights. Sovereign rights is different from title,” he said.

Roque said having “sovereign rights” meant having the “exclusive right to explore and exploit the natural and nonliving resources, natural resources found in the area.”

The United Nations recognized Philippine Rise as part of the country’s continental shelf in April 2012.

But China, commenting last year on protests from Filipino lawmakers against sightings of Chinese ships in the area, said the UN recognition did not mean the rise was part of Philippine territory.

Citing international law, Chinese foreign ministry spokesperson Geng Shuang said a coastal state’s rights over its continental shelf did not affect the legal status of superadjacent waters or of the airspace above those waters, foreign ships’ freedom to navigate the coastal state’s EEZ or the high seas or their right to innocent passage.