‘Why is DFA letting China do research at Benham Rise?’ 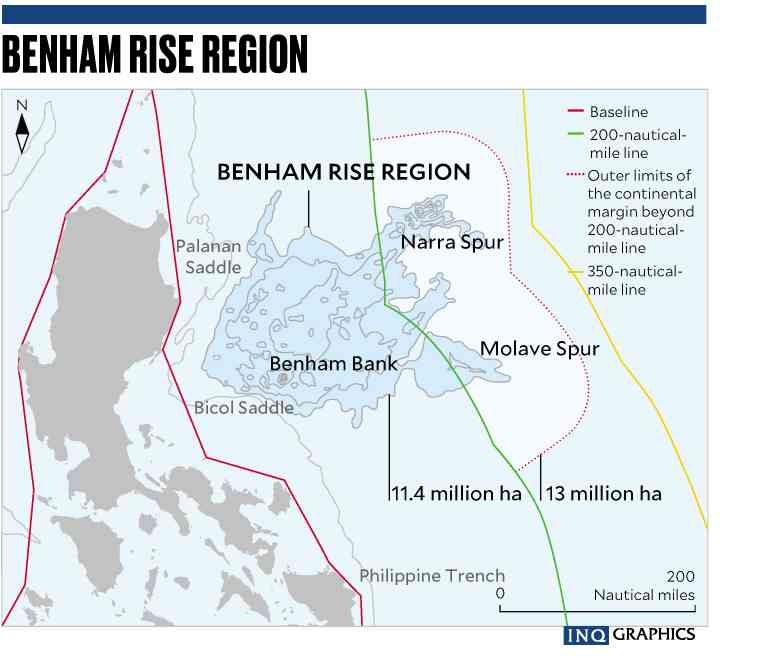 An opposition congressman hit as “careless and absurd” the government’s decision to allow Chinese scientists to conduct “scientific research” in Philippine waters, including Benham Rise.

But Malacañang said there was nothing wrong with China’s exploration of marine resources in the country because the Department of Foreign Affairs (DFA) had approved it.

“[Benham Rise] is an extended continental shelf of the Philippines as awarded to us by the United Nations Commission on the Extended Continental Shelf,” Roque said.

“It is covered by sovereign rights, which is exclusive in nature, unless the Philippines agrees to join explorations,” he added.

Alejano said he received information that the DFA allowed the Institute of Oceanology, Chinese Academy of Sciences (IOCAS) to explore waters off Eastern Luzon and Eastern Mindanao.

The DFA gave its permission so long as scientists from the Marine Science Institute of the University of the Philippines accompanied the Chinese researchers, Alejano said.

But Alejano warned that China might have other designs besides scientific inquiry.

“We should be careful and prudent in granting any access to our waters especially with China who is known to claim 80 percent of our [exclusive economic zone] in South China Sea through its expansive nine-dash line,” Alejano said.

Founded in 1950 and based in Qingdao, Shandong Province, IOCAS is China’s first ocean research institute with almost 500 scientific and technical personnel, according to its website.

IOCAS scientists had been conducting research in Benham Rise and in the West Philippine Sea as early as 2013, according to the website.

There are at least three scientific papers posted on the website referring to studies done in Philippine waters.

But Alejano said it was interesting that the DFA denied a similar request to explore Philippine waters by a French nonprofit organization, Tara Expeditions Foundation.

Alejano said it would have been preferable to grant the permit to the French nonprofit instead of the Chinese think tank.

“The Philippines has no territorial conflict with France, vis-à-vis China which has shown aggression and great interest on our territories. Geographically speaking, France is not an immediate security threat to us compared to China,” he said.

“If in terms of the capability of Tara, I think it is also safe to assume that it is as competent as IOCAS, having already accomplished high-level scientific research missions across the world’s oceans,” he added.

He said China had already “sought several times” for a permit to conduct research in Benham Rise since 2015, but the requests were rejected after the Chinese refused to involve Filipino scientists.

“China has been adamant in exploring Benham Rise and they have no intention of involving Filipino scientists,” he said.

“It seems that China was only forced to collaborate with UP-MIS for the sake of the permit. Given this initial behavior, we should be worried,” Alejano said.

“So why China? What is really the intention of the Duterte administration in allowing such activity at the expense of our national security?” Alejano said.

He recalled that Chinese vessels were spotted surveying Benham Rise for three months in 2016 without the knowledge and permission of the DFA, but it later turned out that Mr. Duterte approved the expedition with the knowledge of his officials.