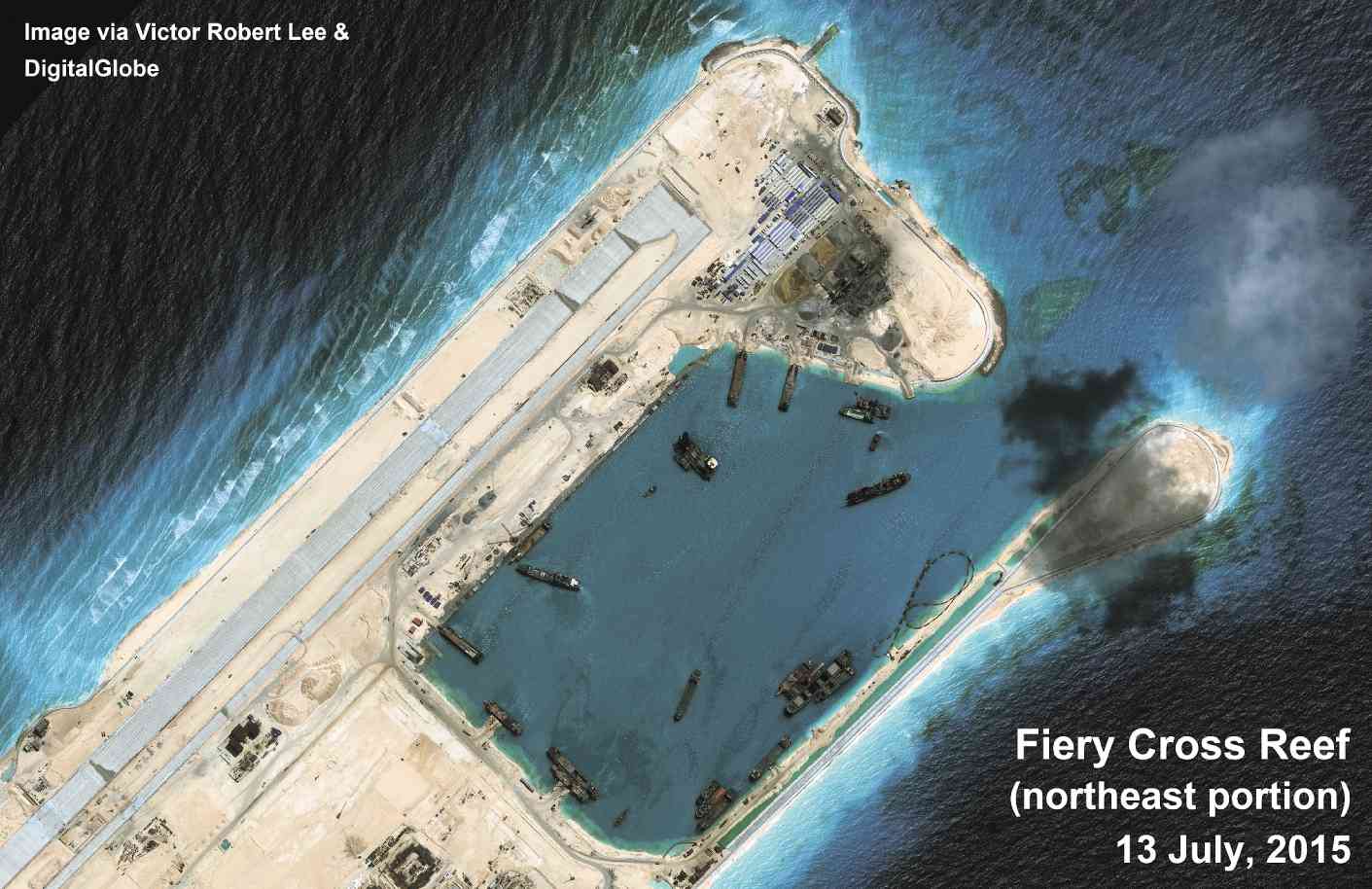 DISPUTED REEF. Photo from the air shows construction activities undertaken by China on Kagitingan Reef (Fiery Cross Reef), including an airstrip, in a disputed area in the South China Sea. The Philippines and China are among several countries claiming ownership of the reefs located on the Spratly Islands. PHOTO BY VICTOR ROBERT LEE AND DIGITALGLOBE

The Chinese government has not breached its good faith obligation even after recent aerial shots of the Fiery Cross or Kagitingan Reef showed that the artificial island has been transformed into an airbase, Malacañang said Tuesday.

“All I’m saying is that there is still no breach of the good faith obligation for as long as China has not embarked on new reclamations,” Presidential Spokesperson Harry Roque said in a Palace briefing.

He clarified that China’s good faith means Beijing would not make new reclamations or any building of military facilities in existing man-made islands.

“So I hope that is very clear. So the good faith we’re relying on is the commitment of China not to embark on new reclamations. Okay?” he added.

But Roque’s statements differ from that of Defense Secretary Delfin Lorenzana.

“I know for a fact that the Chinese government said some time ago that they are not going to militarize those reclaimed islands,” Lorenzana told reporters.

“If it is true and we can prove that they have been putting soldiers and weapons, then it will be a violation of what they said,” he added.

READ: PH to protest vs China if militarization proved on Kagitingan Reef

Despite their different statements, Roque believed that the Chinese militarization in their reclaimed islands was a threat to peace and security in the region.

“Certainly not okay because, of course, it constitutes a further threat to peace and security in the area ‘no. But the point is, has there been a breach of Chinese commitment not to reclaim any new islands or shoals in the area?” he said.

“For as long as there is none, then we continue to respect that they are true to their commitment not to do so,” he added.

The Palace official said news that China has been militarizing islands in the South China Sea was no longer new.

“So the fact that they are actually using it now as military bases, as far as I’m concerned, is not new. It’s not news, because we’ve always been against the militarization of the area. But the good faith commitment is not to reclaim new islands. I hope that’s very clear,” he said.

Asked about the government’s next move, Roque agreed with Lorenzana that filing a diplomatic protest against China was the “proper remedy.”

“Of course, that’s the proper remedy ‘no. But that’s something that the Department of Foreign Affairs will have to address,” he said. /jpv