Which Asian country takes best care of its elders? 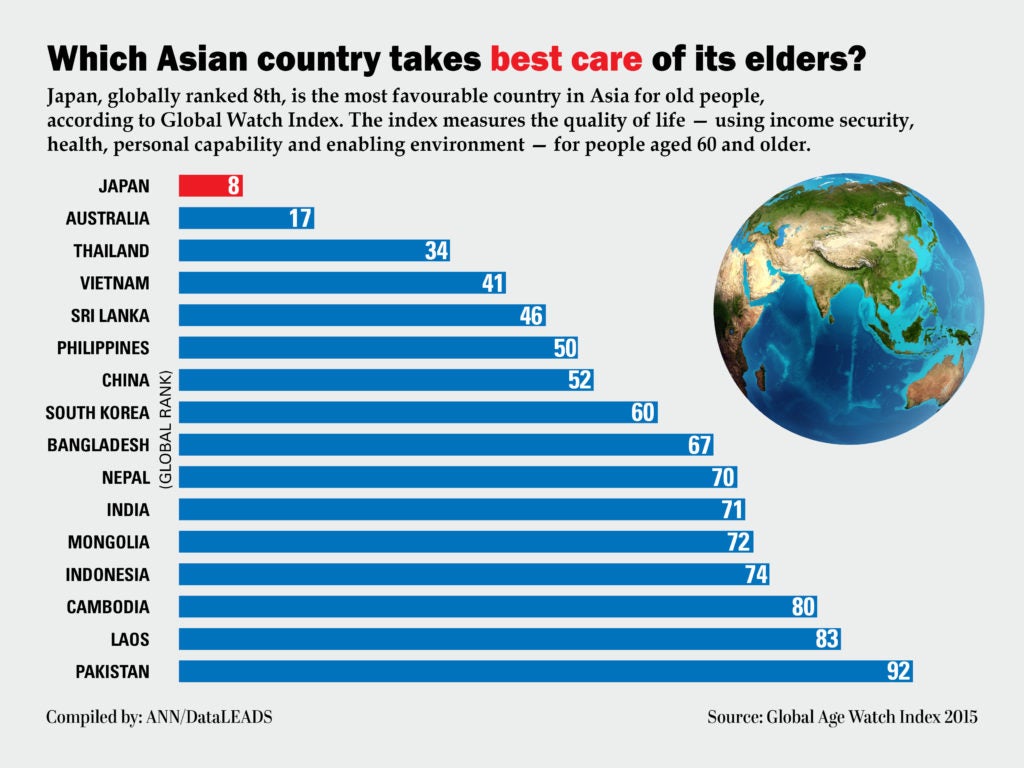 Which Asian country takes best care of its elders? (from ANN)

NEW DELHI – Japan was recognized as the best country in Asia for older people to live, as it reported high satisfaction with social connectedness, safety, and civic freedom, the Global AgeWatch Index 2015 showed.

Globally ranked 8th, Japan was the only Asian country that figures among the top ten countries favorable for growing old.

The Global AgeWatch Index 2015 by HelpAge International measured the quality of life — using income security, health, personal capability, and enabling environment — for people aged 60 and older. It assessed 96 countries to determine the best places for older adults to live. These countries include more than 90 percent of the world’s population aged 60 and above.

With aging as a critical societal issue, Japan has prepared well for it. Nursing homes, home helpers, welfare schemes for old, benefits for retirees, universal health insurance and social pensions  are some of the many measures in place in the country that contribute to the enabling environment for its aging population.

Australia was ranked 13 out of 96 countries. Another Asian country, Thailand, was ranked 34, as the country has revised and upgraded policies on aging in line with the Madrid Plan of Action for Aging.

Vietnam, Philippines, and China ranked 41, 50, and 52 respectively on the list of best countries to live in over the age of 60. China has the largest population of older people in the world at 209 million people. The country established National Commission on Aging people that facilitates focus on the growing older population. Pension coverage and health insurance coverage has gone up to 75 percent and 90 percent, respectively.

South Korea was ranked 60 out of 96 countries.

Sri Lanka has outperformed its South Asian neighbors at number 46. Bangladesh was ranked 67. Nepal was ranked one place above India at 70 due to the government’s social investment.

India was ranked at 71 out of 96 countries.​ It rated low in income security domain with pension coverage to only 28 percent of its aging population. The report said India needs to revise polices on its aging people especially since projections indicate that its aging population would grow three fold from 100 million to 300 million by 2050. The index likewise noted that the older women in India are more vulnerable as they outlive men with meager income or no income sources.

Mongolia, Indonesia, and Cambodia were ranked 72, 74, and 80, respectively.

Laos was ranked low at 83. The index said Laos introduced policies on aging in mid-2000s but the country still has lot to do to improve care for older people.

Meanwhile, with no firm policy in place for its growing population, Pakistan is ranked the worst with global rank of 92 out of 96 countries.

There are approximately 901 million people worldwide who are 60 and above, and globally, Switzerland was ranked the best country to live in for people aged 60 or older.   /kga