Upgrade may dethrone Manila’s ‘King of the Road’ 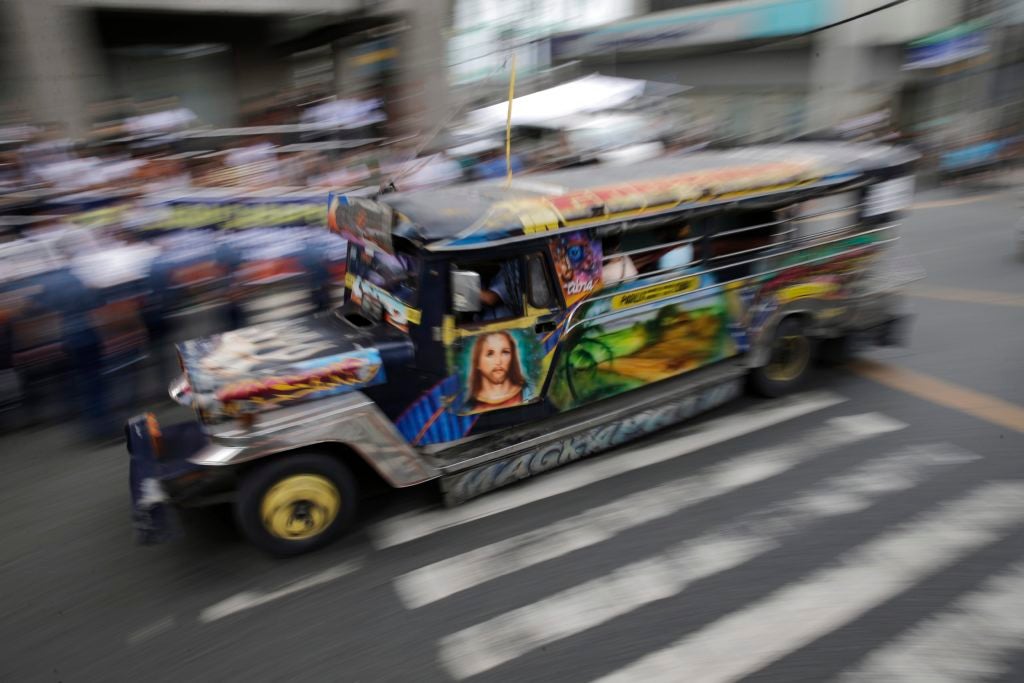 In this October 16, 2017 photo, a passenger jeepney with a painting of Jesus Christ travels along a road in Manila, Philippines. The iconic passenger jeepney is chugging toward change and uncertainty as a government modernization program aims to improve their engines, safety, and convenience in an overhaul that poor Filipino drivers and owners say they cannot afford. (AP Photo/Aaron Favila)

MANILA, Philippines — The Philippines’ iconic passenger jeepney, once regarded as Manila’s “King of the Road,” is chugging toward change and uncertainty.

A remnant of World War II, the gaudily decorated jeepneys evolved from the United States military jeeps that American forces left behind after the war. Filipinos modified and reproduced the vehicles, and for decades were their most popular land vehicle, becoming a daily showcase of Philippine culture on wheels.

Atop the jeepney’s hood stands a horse emblem in chrome, with the vehicle’s body wrapped in vibrant colors and all sorts of artwork, ads, and mundane slogans.

Running on diesel engines, jeepneys, with their low fares, have been the choice transport of working-class Filipinos. But they have also had a major downside: The dark fumes coughed out by thousands of jeepneys have been blamed for Manila’s notoriously polluted air.

Now, a Philippine government modernization program aims for a major makeover of the jeepney and other modes of public transportation by improving their engines, safety, and convenience. Aging jeepneys must go or be outfitted with cleaner engines, Wi-Fi, and security cameras in an overhaul that poor Filipino drivers and owners said they cannot afford.

George San Mateo, who leads a group of drivers and owners called Piston, said the government program would displace more than 600,000 drivers and 250,000 owners and jack up fares. With new jeepneys costing between 1.2 million and 1.6 million pesos ($23,000-$31,000), San Mateo complained that drivers have not been offered a concrete financial assistance scheme by the government.

Drivers have protested, but they got a warning from Philippine President Rodrigo Duterte after staging a two-day strike in October.

“By Jan. 1, if I see any jeep of yours which has not been registered, I’ll drag them away in front of you,” the tough-talking president said.

“It is given that every time there is change, there is resistance,” said Aileen Lizada of the government’s Land Transportation and Franchise Regulatory Board. The government, she said, will convince drivers and owners that the program will actually benefit them, the public and the environment.

Ed Sarao, whose family’s Sarao Motors Inc. is among the most popular jeepney manufacturers in the Philippines, said the company is awaiting the enforcement of the modernization program amid resistance.

“Right now people are still clamoring for the traditional jeepney,” Sarao said, although he added that many prospective buyers have been asking when the modern jeepneys will roll on the road.

“I tell them that the government still has no go signal yet so it is still a wait and see situation for the manufacturers,” Sarao said.

Promoters have been hard at work. Canadian Prime Minister Justin Trudeau was invited to take a short ride on an “e-jeep,” which runs on electricity, this month on the sidelines of an annual diplomatic summit in Manila.

“He’s very happy because he can see our aspirations in changing the Filipinos’ lives,” said Philippine Transport Secretary Arthur Tugade, who accompanied Trudeau to the ceremony. “He said that transportation here is really difficult so there needs to be a lot of patience and understanding and creativity to address the problem.”

Manufacturers of the “modern jeepney” recently unveiled their models, some of which featured security and dashboard cameras, speed limiters, air conditioning to fight the tropical heat and an automatic fare collection system. Some were as big as buses for more passenger load and others have completely discarded the look of traditional jeepneys.

The impending change has divided drivers.

Roberto Martin, president of another group of jeepney drivers and owners called Pasang Masda, said that with some jeepneys running on 30- to 40-year-old engines, drivers should yield to change for the sake of the planet and public health.

“Let’s drive the old jeepneys over to the museum,” Martin said. “If people look for the jeepneys, let’s bring them to the museum.”

Victorino Samson, who has raised his family and children as a driver of traditional jeepneys for more than three decades, disagreed. The modernization program, he said, should be opposed because it would push the old jeepneys into extinction and deprive him and thousands of other drivers of work that has provided about 500 pesos ($10) in daily income.

Some of 62-year-old Samson’s sons have become drivers themselves.

“Where will our jeeps go? How about the drivers?” Samson asked with a worried look.  /kga