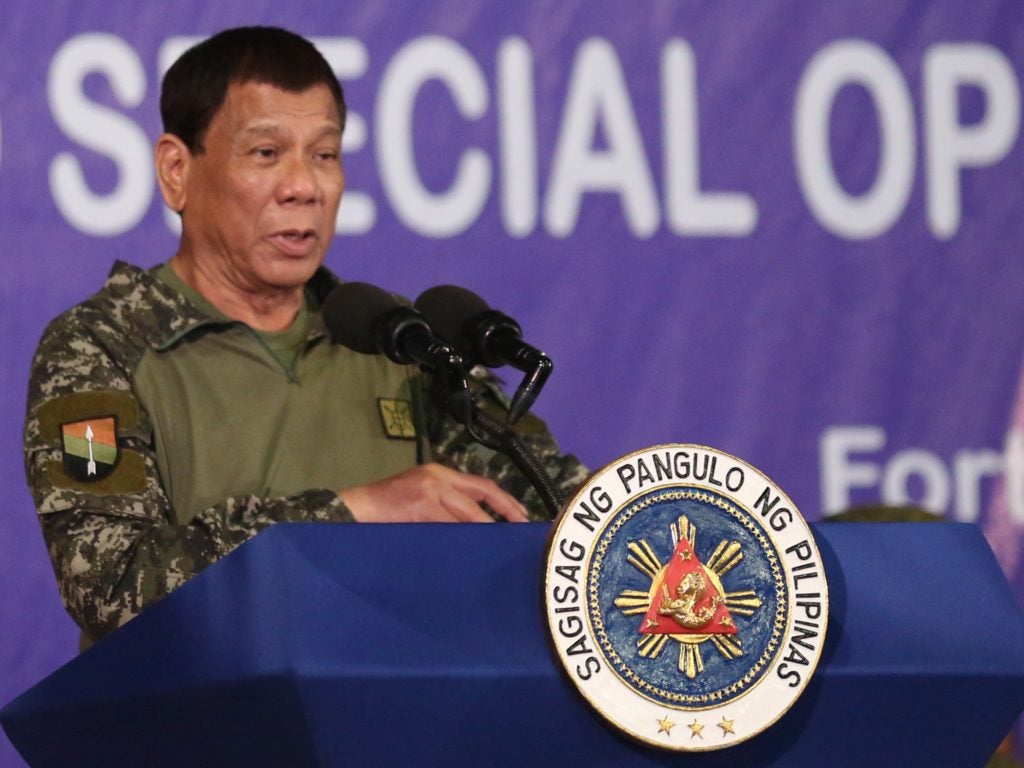 “Why are you pissing me off?”

President Rodrigo Duterte on Tuesday shrugged off the United Nations human rights office’s condemnation of his threat to slap UN Special Rapporteur Agnes Callamard if she insisted on investigating extrajudicial killings in his brutal war on drugs.

Malacañang on Wednesday defended the President’s remarks about Callamard, accusing her of political bias.

Mr. Duterte made the threat in a speech to the Filipino community on Nov. 9 in Da Nang, Vietnam, where he attended the Asia-Pacific Economic Cooperation (Apec) Leaders’ Meeting.

He said he did not expect a fair hearing from Callamard because she “does not believe” the research findings of the UN International Narcotics Control Board on the dangers of illegal drugs.

“He made the same threat against her in June after she criticized his ‘war on drugs’ campaign, which has left thousands dead,” Colville said, referring to remarks made after Callamard’s visit to Manila in May to attend an academic conference in an unofficial capacity.

Recently, Callamard has also been subjected to a “tirade of online abuse, including physical threats, during what appears to be a prolonged and well-orchestrated trolling operation across the internet and on social media,” Colville said.

“We condemn [in the strongest terms] this treatment of Ms Callamard and the disrespect it shows to the Human Rights Council that appointed her,” he added.

Zeid Ra’ad Al Hussein, a spokesperson for the UN High Commissioner for Human Rights, said Mr. Duterte’s threat was part of a “well-orchestrated” intimidation campaign by the President and his supporters to stop Callamard from investigating the thousands of deaths in the war on drugs.

In a statement issued on Wednesday, presidential spokesperson Harry Roque said Mr. Duterte’s statements against Callamard were examples of his “unorthodox rhetoric.”

Roque said the UN High Commissioner for Human Rights should also look into the conduct of its rapporteurs for bias.

“We note the concerns of (Colville) … However, he should do well not to judge the colorful language the President is known for, but by what he stands for and the values he holds dear,” he said.

“We need to point [out] that the President’s remarks on Callamard were addressed to a Filipino audience who are used to the Chief Executive’s unorthodox rhetoric,” he said.

Roque said Callamard was “not a competent and impartial rapporteur” on the government’s campaign against drugs.

“The way she conducted herself does not befit her office. Lest we forget, she came unannounced to the country in May this year even while the terms of her official visit were still being finalized,” he said.

Callamard was the guest at the forum  organized by the Free Legal Assistance Group, Anti-Death Penalty Task Force, UP-Diliman Office of the Chancellor and UP College of Law Institute of Human Rights.

Roque said Colville should look into the conduct of UN special rapporteurs and ensure that their investigations are  “unbiased and transparent.”

Mr. Duterte stuck to his colorful language when asked about the UN rebuke in a news conference in Taguig City on Tuesday.

“Why are you pissing me off?” the President said as he accused the UN High Commissioner on Human Rights of contradicting the World Health Organization, which he said had warned against the dangers of illegal drugs.

“Tell her to face here, son of a bitch. She is insulting us,” he said.

Mr. Duterte said UN agencies should sort out differences in their policies on dealing with illegal drugs.

“Where will you put me? You among yourselves are fighting. You are fighting with each other. Then you come to me to put me to task to answer for what?” he said.

“If you cannot agree with your neighbors there in the United Nations, why are you … why are you pissing me off? That is why I’m also rude to them,” he added.

In his speech at the 65th general assembly of the League of Cities of the Philippines earlier on Tuesday, Mr. Duterte also threatened to slap Commission on Human Rights (CHR) Chair Jose Luis Gascon for expressing concern about violations of human rights in the government’s crackdown on drugs.

In a statement on Wednesday, Gascon implored the President “to raise the public discourse to a level that is about issues, and to respect the mandates of independent bodies as enshrined in the Constitution.”

“In particular, the CHR continues to expect that this government will cooperate with us—and accede to our requests—in the performance of our functions, whatever the President’s personal attitude [toward] us might be. Nothing personal. Let’s just do our job in accordance with the law,” he said. —Reports from Philip C. Tubeza, Dona Z. Pazzibugan, Jaymee T. Gamil, and the wires