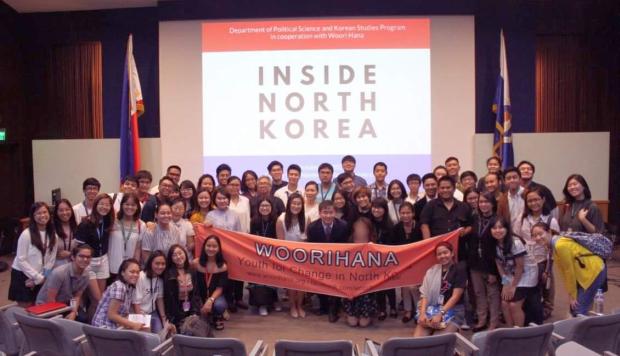 Members of Woorihana with Filipino students at the Ateneo de Manila University. (Photo from the Facebook page ADMU Asian Center)

Three North Korean defectors went to Quezon City late October and faced Filipino students who raised questions about, among others, North Koreans deprived of K-pop culture, the security and risks in Pyonygyang, and blatant violation of human rights in the country.

In a forum last Oct. 23 and 25 at the University of the Philippines in Diliman and at the Ateneo de Manila University, the defectors who belong to the group Woorihana shared their experiences in their home country.

In turn, they asked the Filipino crowd to help in calling out against the missile tests and attacks of North Korea.

Woorihana, which literally means “together as one,” is a nongovernment organization founded in 2012 that aims to help young North Korean defectors through one-on-one English training and leadership programs.

Rico said the forum, also hosted by Ateneo’s Department of Political Science, would be a good opportunity for their students to learn about North Korea straight from the North Koreans themselves.

The audience at the Ateneo included around 150 college students and professors and ninth grade students from Multiple Intelligence International School, who had several questions on culture and specific ways Filipinos and foreign influence could help the distant North Koreans.

Speaking at the event were Woorihana Executive Director Sejun Park, a former doctor in North Korea; Jessie Kim, who escaped from North Korea five years ago; and Hyunji Kim, who left his country only a year ago.

The 18-year-old Hyunji Kim said there were around 30,000 North Koreans who had defected. Six to seven percent of them went back because they felt threatened, she added.

“It is horrible in North Korea,” said Hyunji, who is now a student in South Korea. “My first 17 years were a state of turmoil.”

There is also a great risk in China for defectors like her as brokers are “liars” and would even sell Korean women to Chinese men, she added.

Meanwhile, Jessi Kim said she relied on the state-run media channel of North Korea for updates. It was only later when she found out North Koreans were taught contradicting teachings.

“The media is being controlled by the government,” she said. “Propaganda says North Korea is a supreme country. And we were told it was the North Korea who invaded South Korea, but US and South Korea perpetrated the war.”

The locals, she said, were able to watch other materials like Korean Pop (K-Pop) and foreign movies through the Chinese black market.

Some North Korean defectors who managed to escape their country have a hard time assimilating in their new place because of the several stereotypes on North Koreans.

“I had unwanted attention from South Koreans because I was a defector. It’s my choice to defect from North Korea. It’s not my choice to be born there,” Jessi said.

The defectors, very enthusiastic in answering questions from the students, emphasized the critical of role of Southeast Asia as a mediator in the Korean Peninsula conflict.

“People living in advanced states can be a voice. North Korean locals just want to make a living,” one of the defectors said.

Since 2006, North Korea has been launching missile tests and attacks against South Korea and some parts of US and Japan. The latest and the largest nuclear test was launched last September.

According to Park, who now takes political studies in South Korea, the conflict in the Korean Peninsula is hard to resolve since North Korea is surrounded by the world’s greatest powers, particularly Russia and China.

North Korea also keeps as hostage South Korea, Japan, and China so there will be millions of casualties if the United States attacks North Korea, he added.

Park said China is the best, if not, the only country to convince North Korea to give up its nuclear arms.

“The cooperation with China is the only way for the conflict to be resolved; economic sanctions are useless without China’s cooperation… And China does not want the Korean regime to collapse as a war will pose risk to China,” he added.

Park said North Korea will not give up its (nuclear) arms because it’s the only way it can compete with South Korea.

“North Korea has been using nuclear weapons as a threat and leverage to negotiate with the US. They will say ‘I will give up nuclear program if you give us fuel, food.’ Also with the Chinese, ‘we will agree on (giving up) the nuclear issue…then they will ask for fuel,” Park added.

External pressure or internal collapse, such as transition of North Korean’s transition to a democratic government could also be one of the solutions to the current crisis in the peninsula, he added. /atm