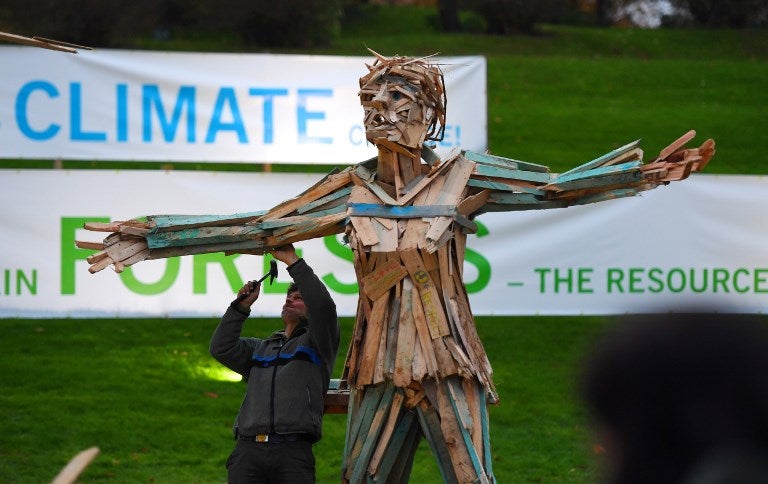 An artist builds a figure out of wooden pieces at the Rheinaue park during the COP23 United Nations Climate Change Conference in Bonn, Germany. AFP

The Philippines made a strong call for climate justice as parties to the 23rd United Nations Climate Change Conference (COP23) in Bonn, Germany continued negotiations to come up with mechanisms to implement the 2015 Paris Agreement.

Sen. Loren Legarda, head of the Philippine delegation to the COP23, delivered the Philippine statement on Thursday during the high level segment of the COP23 to the United Nations Framework Convention on Climate Change (UNFCCC).

“We come to COP23 with a strong call for climate justice: that those who are most vulnerable, who suffer the most from the adverse effects of climate change and who have contributed the least to climate change are empowered and enabled, in terms of capacity and finance, to fight back,” said Legarda.

She said this required a firm resolve to act urgently as the window of opportunity to achieve the 1.5 degrees Celsius goal of the Paris Agreement was fast closing, and any delay will bring irreversible results.

Legarda, who was named a UNFCCC adaptation champion, said the Philippines, despite the challenges and its limited resources, was carrying out its work to confront the climate crisis and promote sustainable development.

“We in the Philippines are doing our part. Despite all odds, we ratified and become party to the Paris Agreement,” noted the senator, adding that the Philippine government has mainstreamed climate and geo-tagging into its budget processes.

Legarda also reported to the COP23 that the Philippines has set up a People’s Survival Fund, which provides over P1 billion a year for local government and community initiatives to fight climate change, and has enacted a renewable energy law and a Green Jobs Act.

“We will do more. We are developing policies on carbon pricing and green banking. We intend to impose a tax on coal and we are greening our hospitals,” she said assuring international climate allies that the country was not just pursuing a transition to a green economy but a transformation in governance and business.

But she admitted that the country, being a developing nation, needed the technical and financial support to pursue more ambitious climate action as indicated in its intended Nationally Determined Contribution.

As a party to the Paris Agreement, the Philippines has committed to cut its carbon emissions by 70 percent by 2030 from the sectors of energy, transport, waste, forestry and industry.