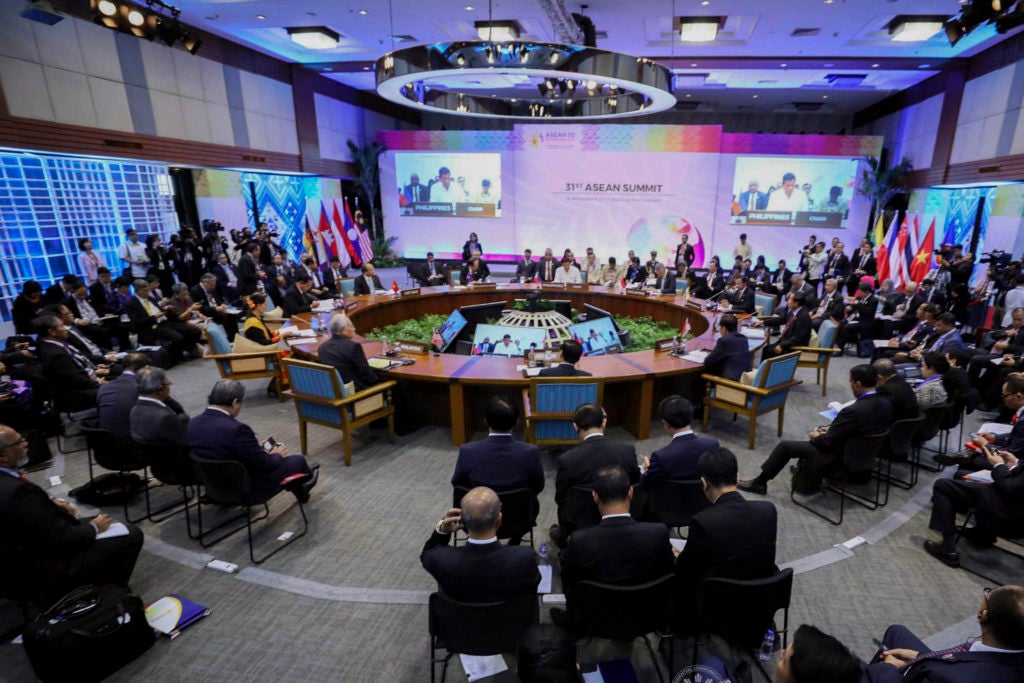 ASEAN SUMMIT Leaders of the Association of Southeast Asian Nations (Asean) exchange views during their summit onMonday
and Tuesday, but a joint statement released on Thursday made no mention of China’s island-building in the South China Sea, the
Rohingya crisis and other serious human rights concerns in the region. —MALACAÑANG PHOTO

Southeast Asian leaders on Thursday avoided mention in a joint statement of China’s construction of artificial islands and militarization in the South China Sea and glossed over the plight of Rohingya Muslims in Myanmar’s Rakhine state.

Speaking on behalf of fellow heads of state of the Association of Southeast Asian Nations (Asean), President Duterte expectedly skirted any expression of alarm over serious human rights concerns in the region, including accusations of ethnic cleansing carried out by Myanmar’s military against Rohingya Muslims and his deadly war on drugs in a statement following the Asean Summit in Manila on Monday and Tuesday.

Such statements have been made public shortly after the annual gatherings of leaders of the 10-nation bloc but there was no immediate explanation for the two-day delay.

The few instances of delays in the past were caused by differences over wording on long-thorny issues, like the territorial rifts between China and four members of Asean.

China, which wields considerable influence on Asean, has steadfastly opposed criticism of its artificial islands, where it has reportedly installed a missile defense system despite widespread concern, including the United States, Japan and Australia.

He has toned down sharp rebuke of China’s assertive actions in the South China Sea and refused to immediately seek Chinese compliance with an arbitration ruling last year that invalidated its claim to nearly all of the sea on historical grounds and clarified the Philippines’ rights to fish and explore for resources in its 370-kilometer exclusive economic zone in the strategic waterway.

In the Asean chair’s statement, Mr. Duterte repeated previous calls for a peaceful resolution of the South China Sea disputes and adherence to the rule of law, and welcomed the approval of a framework for negotiating a code of conduct for the claimants.

While Asean’s decision to adopt a nonconfrontational approach promotes friendly relations with China, it may not foster the rule of law, said

Malcolm Cook, a senior fellow with the Institute of Southeast Asian Studies-Yusof Ishak Institute in Singapore.

“It is bad because it clearly places the political expediency of good relations with China over holding China to fulfilling its commitments under international law,” Cook said. “Short-term expediency trumps long-term principle.”

In the chair’s statement, Mr. Duterte said Asean leaders respected the right of each head of state to decide how to carry out the campaign against illegal drugs, in an apparent rejection of international calls for an end to alleged extrajudicial killings in his brutal war on drugs.

The Department of Foreign Affairs released the statements on Thursday, saying the chair’s statement was an “actual reflection of the discussions in the meetings,” unlike the joint communiqué, which had to be agreed upon by all the 10 members of Asean.

The joint statement said that after the adoption of a framework for the negotiation of a code of conduct for claimants in the South China Sea in August, Southeast Asian nations looked forward to the convening of the Asean-China joint working group in Vietnam in early 2018, but it did not say whether the meeting signals the start of talks for the code.

The code seeks to advance the 2002 Declaration of Conduct of Parties in the South China Sea, which calls on the claimants to exercise self-restraint.

But since the declaration is nonbinding, China has gone ahead and built artificial islands and topped these with military installations to bolster its sweeping claim to the South China Sea.

That the statement said nothing about this indicated “lack of urgency and importance” for the concerns of China’s rivals for territory in the South China Sea, according to Jay Batongbacal, director of the University of the Philippines Institute for Maritime Affairs and Law of the Sea,

“It was merely a reiteration of previous statements,” he said.

Batongbacal said Asean had lost the “opportunities to try to leverage the arbitration decision” won by the Philippines last year.

“You have that document showing you won the case, but you kept quiet during the Asean Summit instead of discussing it. That means something: You don’t want to disrupt relations with China,” Cabalza said.

The Asean leaders also did not condemn the Myanmar military for the suffering of the Rohingya Muslims, but expressed support for Myanmar’s humanitarian relief program in Rakhine state. —REPORTS FROM DONA Z. PAZZIBUGAN, NIKKO DIZON AND AP